I made a long overdue trip up to my study site near Waxahachie, TX yesterday. Just to remind everyone, and alert new readers to what I’m up to there, this is the area where several horses and a mule have suffered injuries from what the property owners feel is a big cat of some kind. Both property owners claim sightings of cougars and a large black cat of some kind over the last couple of years. One of them claims to have actually been semi-charged by a large cougar-sized cat that was very dark in color one night while feeding the horses. I say “semi-charged” because the cat did stop short and retreat back into the brush. 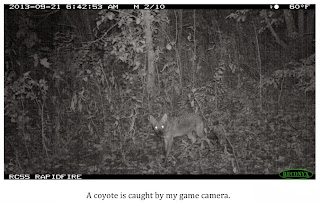 Currently, I have two game cameras on the property and have spent a little time still-hunting and hoping for an opportunity to see for myself just what might be stalking the property. Up to this point I have had no luck finding anything concrete that might prove the presence of a big cat of some kind on the property. While my trip yesterday failed to produce a photo or a sighting, it did provide some tantalizing tidbits that may point to the, at least occasional, presence of a large predator on the property. 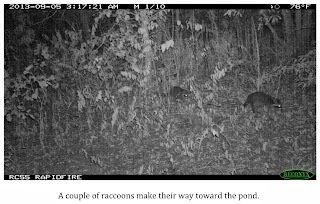 I started the day by refreshing the two cameras, which are located adjacent to a small pond near the rear of the property. One camera was placed overlooking a game trail which wound from a heavily wooded area bordering Waxahachie Creek and yielded a lot of photos. Upon checking the card, I was a bit dismayed to see that the camera was taking nice night shots but the day shots were poor in quality. The edges of all daytime photos are very fuzzy and blurred. The area that remained in focus seemed to get smaller with each passing day. I found it odd since all of the night shots were perfectly focused. This obviously meant it was not just a dirty lens. A bit confused, I downloaded the images, changed the batteries, and left the camera to continue its work. I moved to the second camera that overlooks an area the property owners have taken to calling scat rock. This is a rocky area on the east side of the pond where loads of predator scat has been found. The scat contains bones and hair and is white in color. When I tell you there is a lot of it at this location I am not engaging in hyperbole. The area is covered. It is clearly a latrine area for some predatory animal. I was very excited to see lots of new scat directly in front of the camera location. My excitement was short-lived, however, when I found that the camera had malfunctioned and failed to take even one photo. This is the second time this particular camera has malfunctioned and I am fed up with it. I went ahead and fiddled with it a bit, changed the batteries, and redeployed it. I changed the settings so that it is now programmed to take still shots instead of videos in the hopes that would work. I had little to lose, as I had no new camera with which to replace this one. I will have a replacement ready for deployment next time. 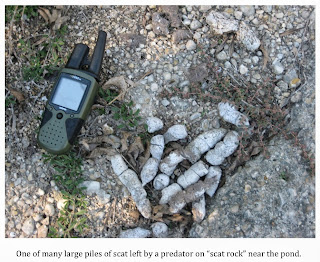 I spent the rest of the afternoon walking the more remote portions of the property. I found an area situated on a long, tree-covered berm that separates two portions of the property and sat down, rifle in hand, in the hopes that the problem cat might wander out in front of me. Within 15 minutes, I began to hear a large animal of some kind moving about in a heavy thicket about 50 yards in front of me. The volume of the noise led me to believe this was a substantial animal. It moved about a good bit, even thrashing about quite violently at one point, but I was never able to obtain a visual. After more than an hour of this, I decided to move and loop around in the hopes of getting a look at the hidden animal. I retreated to the opposite side of the berm and quietly hiked approximately 200 yards to the north. I then climbed back over the berm and made my way back toward my original location as stealthily as possible. The hope was that the mystery animal would have seen me leave but not sensed me returning (the wind was in my favor so it should not have winded me). I had crept to within 25 yards of my original location when I found something I’ve never come across before. 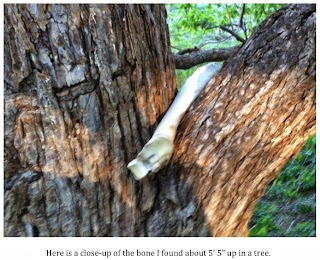 I spied what appeared to be a thick leg bone (probably from a hog) wedged into the “y” of a tree. The bone was about five and a half-feet off the ground. At the base of the tree was another bone. This particular tree had recently been snapped off only a few feet above the spot where the leg bone was wedged. The limb that shot off from the snapped trunk had also been broken just beyond the bone’s location. In my many years of hiking about in the woods, mountains and swamps, I’ve never found a bone in a tree. Ever. I photographed the scene and then examined the bone but found no obvious signs of gnawing. I decided to replace it. I didn’t really know what else to do. It was beginning to get dark by this time so I started making my way back toward my truck. 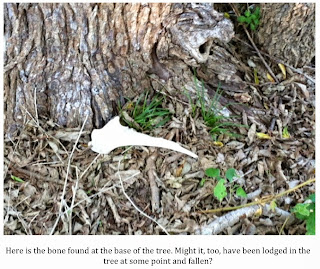 I was still about a quarter of a mile away from my truck when I heard another (same?) animal moving about in the tree line to my left. As before, this was obviously a heavy animal of some kind. It was crashing about the brush and creating quite a ruckus. I wasn’t too worried about it being a cat. No cat carries on like that. I was guessing it was a big hog as the property is covered up with them. I couldn’t believe I couldn’t see whatever it was that was making so much noise. It couldn’t have been more than 20 yards from me. It was right THERE but I saw nothing. I continued walking and it paralleled me. When I stopped it would stop, though it continued to be loud. It was only when I got to within 100 yards of the truck that whatever it was moved off. I could hear it as it retreated. 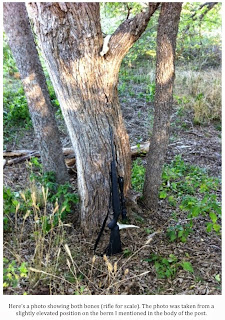 I was a bit puzzled by this mystery animal’s behavior but, honestly, was more intrigued by the bone I had found wedged in a tree. I shared the pictures with several friends, all of whom have years of outdoor experience. As you might imagine, I received all manner of possible explanations. As far as animals that might have carried the bone up into the tree, raccoons, bobcats, porcupines and vultures were mentioned. One friend even mentioned the possibility that the bone might have become lodged in the tree during a high water event. A human culprit was also suggested. Everyone had different ideas. The one possible explanation that every single one of them mentioned was a big cat.

Mountain lions are not known to cache kills in trees. Generally, they cover kills with dirt, grass and leaf litter. This is generally pretty effective and since there are no other large carnivores in the area (that we know of) that might steal a kill it makes little since for cougars to expend the energy necessary to haul prey into a tree. It is a common misconception that all big cats do this. Leopards are really the only known big cat to cache kills in trees but only because of the presence of lions and hyenas. Mountain lions don’t have the same worries here in North America. Jaguars certainly are strong enough to cache prey in trees but have only been observed doing so on a few occasions. It is my understanding that the jaguars seen doing this only did so in order to avoid losing the kill to rising flood waters. 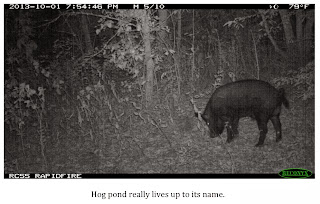 I suppose I should stand down a bit here. Clearly, this bone does not represent an entire carcass cached in a tree. It was one bone (though the additional bone at the base of the tree suggests it, too, might have been in the tree at one point). I cannot assume that there was an entire carcass in this tree at some point. I can only go with what I found. Since only one bone, even though it was quite substantial, was located, maybe a smaller animal did grab a piece of a carcass and enjoy a snack in the tree. As intriguing as this find might be to me, it does not prove a big cat is on the property.

The bone is another piece in an ever-expanding puzzle. Something has attacked the resident horses and mule on more than one occasion, these animals exhibit fearful behavior several times per month (I’ve seen it myself), a predator of some kind is leaving a LOT of scat on the property, and now something has deposited a leg bone in a tree. Add the anecdotal evidence of the big cat sightings reported by the landowners and the puzzle begins to take shape.

The puzzle remains incomplete, however. It is as if all the edge pieces are in place, forming a frame, but the middle pieces that reveal all the answers remain missing. I can only hope that with continued effort, I can find those middle pieces and solve this riddle once and for all.