I just wanted to pause and wish everyone a very Merry Christmas. I appreciate everyone of you who stop by to read my thoughts from time to time. You are much appreciated.

Things have been a bit crazy for me of late but I hope to get back to posting more regularly once the holiday season is over.

Until then, my best to you all.
Posted by Mike at 2:10 PM No comments:

Yesterday, I managed to make a long overdue trip up to my study site in Ellis County, Texas. I have had cameras on the property off and on for about two years now. The property owner originally contacted me after multiple family members had seen large cats on the property (one tawny-colored mountain lion and one large long-tailed black cat) and several of the horses on the property came up with injuries that resembled deep claw marks and puncture wounds on their haunches and necks. To date, I have captured one intriguing video of an animal I cannot identify but nothing else unusual. I have tons of photos of feral hogs, raccoons, opossums, coyotes and a few of bobcats. Interestingly, I have not one single shot of a white-tailed deer.

My arsenal of game cameras has become quite depleted over the last few years. Some have worn out and stopped working properly. Some have been destroyed in high water events. Still other cameras have been stolen. For the last few months I have had only one camera on the property, a Cuddeback Ambush model. I was several weeks past due on checking this camera and anxious to look at what it might have captured. Also, I recently had two older Reconyx cameras (an RC55 and an RC60) repaired and upgraded and was ready to get them back out into the field. All that being the case, I set out for Ellis County excited at the prospect of having better coverage of the property once the reconditioned Reconyx cameras were deployed. Upon arrival, the first order of business was getting the two reconditioned cameras set out. I found two locations that I am very excited about. Both cameras will be overlooking spots where well-worn game trails intersect. The trails run very close to a major creek in a heavily wooded section of the property. There are ample food sources and several dens, belonging to several different species, were found while scouting the potential camera locations. I anticipate getting some nice photos of whatever roams around those woods. Once the two Reconyx cameras were placed, secured with camouflaged steel cables and padlocks and activated, we moved to the location of the Cuddeback Ambush camera in order to download what photos and/or video it might have captured over the last two months.

I was disappointed in the number of events the camera was able to capture. The spot over which the camera watched, apparently, is not the busy animal thoroughfare I thought it was when I placed it. Even so, I got some nice shots of a couple of very large feral hogs and some coyotes. One of the hog shots is interesting as it shows this very large pig leaping into the air. I am not sure why it was doing so as there is no debris in that spot that could not be negotiated simply by stepping over. Maybe it was feeling its oats that night. In any case, it is a fun photo. A couple of the coyote shots interested me as the animal(s) photographed is travelling with its tail straight out behind it in a horizontal position . This is a characteristic of wolves, not coyotes, which usually travel with their tails down below the level of their backs. Do not misunderstand me, as I am not claiming the canid photographed is a red wolf. I do feel, however, that it could be a sign that the coyotes in this particular area have some red wolf lineage to them. 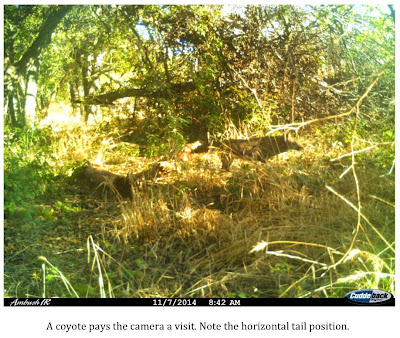 By far the most interesting item captured by the Cuddeback is a short video showing an animal of some kind in a tree. The animal is a rusty color and, though mostly obscured by foliage and branches, clearly negotiating a tree branch in the upper right hand portion of the video. There appears to be the flip of a tail, or some other appendage, toward the end of the video. The tail, if that is what it is, appears too thick and puffy to be that of a cat, in my opinion. The animal is close to the same color as the coyotes photographed. Could a coyote be up in this tree? Not impossible, I suppose, but not the likeliest of explanations either. I feel a red fox is a possibility. I know foxes have a limited ability to climb trees and they are native to the area. Admittedly, I have never captured a photo of a fox (red or gray) on the property and the animal in the video seems a bit large to be a fox (you’ll have to take my word on this as I am familiar with the tree in which this animal is moving). It is a bit of a head scratcher but enjoyable to ponder. Maybe the culprit will return now that the leaves have dropped and it would be easier to identify. The video is below. Again, keep your eyes on the upper right hand quadrant of the video.

Overall, it was a very good trip. The property owners and I have become good friends and it is always nice to visit with them. Time outdoors is always a good thing as well and does more to recharge me than just about anything else. The only negative I took away was the quality of some of the video shot by the Cuddeback Ambush camera. The video of the last few events captured was of very poor quality. So much so that it was hard to tell what you were looking at on the screen. I am hoping this is a result of the batteries having been very low (I was more than a month overdue in changing them) and not some flaw in this almost brand new camera. Time will tell, I suppose.

I am having trouble finding the time necessary to write any in depth posts (basketball season) so I have been posting some quotes that I like or feel are relevant to the cryptozoological field. I should have a "real" post up soon but, in the meantime, enjoy this quote from Robert M. Pyle, Phd in regards to the possible existence of the sasquatch or wood ape.

“There is no prevailing model of anthropology and zoology, I would suggest, that eliminates the possibility, let alone the likelihood, of bigfoot. Not on an evolutionary ground, not on a bio-geographical ground, not on an ecological ground, not on a metabolic ground. The only thing that keeps scientists, I think, from putting their necks out and saying this is something worth our looking into is their own fear of ridicule.”

Email ThisBlogThis!Share to TwitterShare to FacebookShare to Pinterest
Labels: Quotes

I thought I would share a couple of my favorite quotes with you. Both of these quotes were made by noted researchers of cryptozoological phenomenon concerning their particular areas of interest; however, I have always felt these quotes were applicable in a much broader sense. Current events have only strengthened that sentiment. I present them for your consideration below.

“Most of us dislike having to change our opinions. So, while facts are facts, objectionable ones are often deliberately misinterpreted."