Just a reminder on how to contact me if you have a question or report and would like me to respond. Please email me at Texascryptidhunter@yahoo.com for such queries.

Many people of late have asked questions in the comments section of a post. Many have done so and remained anonymous on their comment. Please note that I cannot answer you directly after you leave a comment unless it includes your name, email, and/or phone number. I understand why someone would not want to leave contact information in a comment that anyone can see so the email is a better choice.
Posted by Mike at 11:06 AM 2 comments:

After months of working on and finishing up my book, then arranging various types of publicity to support the release (radio and podcast interviews, speaking engagements, etc.), I was thrilled to actually get out in the field yesterday.

A while back, a reader of the blog and Facebook page contacted me with a black panther sighting report. The family owns approximately 300 acres of hardwood bottomland along the Sabine River in Hunt County northeast of the Dallas-Fort Worth Metroplex. The area is rich in food and water resources. Not only does the property sit along the river, it features a large tributary creek that winds through the land before emptying into the larger Sabine. Feral hogs, white-tail deer, foxes, coyotes and various other possible prey species are present in abundance. The property provided an absolutely perfect habitat where a large cat could remain virtually undetected. The property was so large that it presented a problem for me. I have only two game cameras available at this time and the entire area looked so promising it was difficult to pick spots for them. I finally chose a spot where wildlife was clearly crossing the creek and passing through a break in the brush into a more open area on the other side. It was a natural funnel and I expect to get a lot of photos from the camera posted at this spot. Hopefully, one will be of the cat I seek. The second camera was placed on a tree that stood at the intersection of three different game trails. The trails formed a “Y” and the tree that I posted the camera on was in the middle of the v-shape at the top of the “Y.” The trails obviously are heavily traveled – mostly by hogs, no doubt – and this camera should provide a lot of photos. 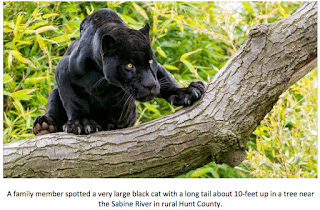 The landowner and her family could not have been more hospitable. They are good folks who love and know their wildlife. They told me that they have seen two mountain lions on the property in the last 5-6 years and that what was seen a few months ago was very different. It was very large, had a very long tail, and was solid black. The family member who saw the cat initially spotted it about 10-feet up in a tree. Upon being seen the cat leapt down and ran toward the Sabine. The family member got a good look at it and is sure it was no cougar. The family feels a real sense of relief that the cat chose to run away and that no confrontation took place. They just want to know what prowls their property and I hope to be able to provide some answers.

I will be refreshing the cameras – and hopefully adding more – in 5-6 weeks. Keep your fingers crossed.
Posted by Mike at 12:01 AM 6 comments: