Once in a Lifetime: Steller's Sea Eagle Spotted in Texas

Most of us would consider our chances of winning the lottery or being struck by lightning as highly unlikely. The odds of such an event occurring in the life of an individual are ridiculously long. Another event that would carry similar long-shot odds would be spotting a Steller’s sea eagle in south Texas; yet, it appears that event has actually taken place. 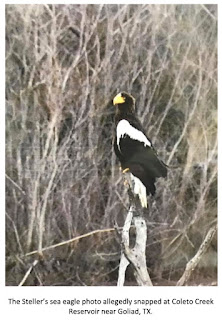 The Steller’s sea eagle (Haliaeetus pelagicus) is a striking bird of prey native to coastal northeastern Asia. It is among the largest and heaviest eagles in the world achieving lengths of 2 – 3.5 feet and weighing 11 – 20 pounds. The species sports an impressive wingspan of 7 feet on average though larger eagles are suspected to exist. Unsubstantiated reports of wingspans of up to 9 feet exist and, though not officially recognized, are not thought to be outlandish. When it comes to size, only the harpy eagle (Harpia harpyja) and Phillipine eagle (Pithecophaga jefferyi) can give the Steller’s  sea eagle a run for its money. The Steller’s  eagle is a strikingly marked bird with dark brown feathers, white wings, and a white tail. The beak and eyes of this bird are a bright yellow. The feet, too, are a bright yellow, and sport talons a bit more curved than those typically seen on inland eagles. All in all, this is not a bird that is going to be easily misidentified.

The fun started on March 10th when a photo of a Steller’s  sea eagle was posted on the Facebook page of the Barnhart Q5 Ranch & Nature Retreat. According to the post, the bird was spotted on the Coleto Creek arm of Coleto Creek Reservoir and downstream from the Coletoville Road bridge in Goliad County. The snag on which the eagle was perched has been found and the location verified according to my contacts in the birding community. Those same contacts have told me there is no sign of photoshopping or other doctoring of the original image. More and more of the Texas birding community – who initially scoffed at the possibility of this species being seen in the Lone Star State – are coming around to the likelihood that the sighting is legitimate.

If true, how could a Steller’s  sea eagle have gotten so lost? The first possibility is that it did not. Some have speculated that what was seen was a bird that escaped from a zoo or a falconer. It is a theory that would neatly sum up the mystery as to how this eagle ended up at least 5,000 miles from home; however, there are problems with this hypothesis. There are very few Steller’s  sea eagles in U.S. collections. According to several veteran Texas birders to whom I spoke, there are less than 20 of these eagles in captivity in the United States. A quick search revealed that zoos in San Diego, Cincinnati, Denver, Boise, Louisville, and New England house specimens. These are some of the heavyweights of the zoo world in North America and not roadside menageries with a ramshackle enclosures that might make escape possible. None of these zoos have reported a missing eagle. These same birders went on to address the falconer theory and said this explanation is unlikely. One said, “It would be an extremely tough bird for a falconer to even obtain.” To sum up, the idea that this bird is an escapee has lost a lot of steam. 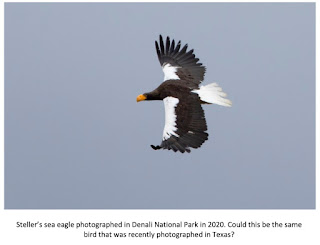 If one considers the possibility that the photo is legitimate, we are still left to wonder how and why this magnificent bird got so far off course. While native to eastern Asia, these eagles are occasionally seen on the western-most islands of Alaska. In September of last year, however, an adult bird was seen much farther inland at Denali National Park. At the time, it was considered to be the farthest inland the species had ever been seen. If that bird lingered in Alaska over the following five months, it is possible it was forced south by the brutal Arctic front that recently assaulted Texas and caused so much havoc. If so, now that the weather has warmed, this eagle likely will not be around much longer. That being the case, many Texas birders are racing to the Goliad area as quickly as possible in the hopes of capitalizing on what is almost assuredly a once in a lifetime opportunity to see this eagle.

Another possibility as to how this eagle found its way to Texas is that there is something wrong with it. Occasionally, individual birds lose their ability to navigate properly. It is almost as if their internal compass suddenly ceases to operate correctly. This loss of navigational ability has led to sightings of species far outside of their normal ranges. One such recent example is the case of a great black hawk (Buteogallus urubitinga) – a bird that is native to South America, Central America, and Mexico – that ended up in Maine in 2019. This incident ended on a sad note when the hawk was found near frozen one cold January day. The bird was taken to a rehabilitation center but suffered frostbite on its feet and had to be euthanized. The only explanation for how this species managed to get 2,000 miles from its accepted home range is that something in its internal navigation system went haywire. We can only hope that a happier fate awaits the Texas Steller’s  sea eagle.

So, if you are in the Goliad area, you might want to take a ride out to Coleto Creek Reservoir and see if you can catch a glimpse of this magnificent, wayward eagle. While you are out, you might want to buy a lottery ticket as well. As this Steller’s  sea eagle has proven, sometimes long-shots pay off.