The Legend of the Belled Buzzard

Going on ten years ago, I was out checking on some game cameras here in Central Texas. I had placed my cameras along the Lampasas River below the Stillhouse Hollow Dam. My cameras never captured anything unusual while in this location, but I did experience something a bit odd one day while servicing them. I was changing out batteries on one of the cameras when I thought I heard the tinkling of a bell. It was a sound akin to that made by a small, round “sleigh bell.” I turned to look around, but saw nothing. I started to get on with the task at hand when I heard the bell again. This time, the sound seemed to emanate from somewhere above me. I looked up into the trees but saw only a few black vultures (Coragyps atratus) lingering about. The whole thing was a bit odd, but – and you know this if you have followed the blog for any length of time – I have had much stranger experiences while out in the woods so I just finished the chore of refreshing my trail camera. I did not hear the sound again that day, or on any of my subsequent trips to the location, and thought so little of it I did not mention it in the blog post I made later regarding the photos I had captured on that particular set. I had not thought about that day in years, but a recent discovery brought it all back and made me wonder about what I might have heard that day.

Recently, I was thumbing through a book called Unexplained! By Jerome Clark at the Temple Public Library. I was flipping through the usual chapters on the UFOs, sasquatches, yetis, and Loch Ness monsters of the world when my eyes fell upon an entry titled “Belled Buzzard.” Never having heard of such a thing, I began reading. Imagine my surprise to find out that many odd stories have been published over the years – most between 1860 and 1950 – about a “belled buzzard.” Reports spanned the continent from the Dakotas to Florida, but a couple of locales popped up more than any others: Indiana and, you guessed it, Texas. 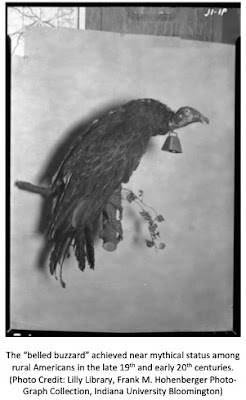 The origin of the belled buzzard legend is hazy at best. The earliest sightings seem to have occurred in 1869 in Tennessee. These encounters were documented in the Memphis Appeal in the early summer months of that year and the stories were picked up and reprinted by other newspapers across the country. The term belled buzzard is not used in the articles, but related were the tales of two separate accounts where multiple people spotted a buzzard (a colloquial term for a vulture) with a small bell around its neck. The sightings took place on a farm near Burnsville and witnesses described the bird seen as seeming “more than usually wild.”

Following are snippets of the earliest Texas accounts I could locate:

Pilot Point, April 25, 1893. “The belled buzzard was seen…by Mrs. Keys and family on their farm near town and as usual it was not accompanied by any of its kind” (Dallas Morning News, April 30)

Erath County, March 18, 1894. “Col. J. L. Hansel…always doubted reports concerning the famous ‘belled buzzard.’ He did not believe until yesterday afternoon that such a buzzard existed. He was out in his yard when above him he heard a bell ringing. Looking up he saw a buzzard with a bell hanging on its neck” (Dallas Morning News, March 20).

Nunn, early June, 1894. “M. K. Ownsly and Will James caught a belled buzzard… The bell was branded ‘J’ and was attached to the buzzard’s neck by a leather collar” (Dallas Morning News, June 15)

Longview, June 27, 1894. “A buzzard wearing a sheep bell was seen by several citizens yesterday morning. The belled buzzard has been seen at numerous places in this state…Mr. O. H. Methvin and his son, over whose corn field he circled several times, thought it was a belled sheep or calf in their corn and tried some time to find it” (Dallas Morning News, June 29). 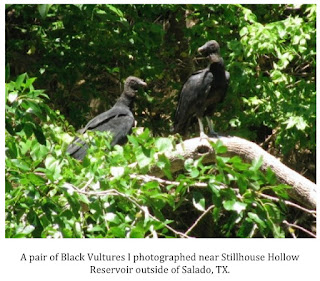 Chatfield, April 3, 1898. “’The belled buzzard’ has been captured. It was caught…last Sunday. The bell consisted of an oyster can securely tied about the bird’s neck with a ten-penny nail as the bell clapper. It was trapped on the farm of Mr. T. B. Roberts, liberated from the burden, which had cut into the flesh, and the bird turned loose. The can is on exhibition at Shook’s drug store” (Dallas Morning News, April 10, quoting the Corsicana Chronicle, Texas).

Woodbury, October 29, 1900. “J. C. Goldfrey…informed The News correspondent that the celebrated belled buzzard spent the day on his farm yesterday. He saw it several times and distinctly heard the bell which he described as having a tin sound” (Dallas Morning News, October 31).

Falfurrias, early February, 1931. “A belled buzzard may be seen daily in the Flowella section…Mrs. J. F. Dawson and her son, Jimmie, were working in the yard…when suddenly they heard the tinkle of a small bell, seemingly out of the blue sky. After straining their eyes in every direction for a short time, they discovered  his buzzardship lazily floating along, while with each flap of his wings the little bell tinkled” (San Antonio Express, February 15).

Just where did this belled bird or birds - for surely it had to have been more than one vulture responsible for the plethora of sightings - come from? One of the origin stories that seems the most credible came from physician C. A. Tindall of Shelbyville, Indiana. While being interviewed by an International News Service Reporter in March of 1930, the good doctor – after discussing a recent sighting – said, “It calls to mind an incident that occurred about 1879 or 1880 on the old home farm four miles out of Shelbyville.” Dr. Tindall goes on to say that he and his brothers discovered a buzzard’s nest on the family property and were able to catch a hen guarding her eggs. “We put a sheep bell with a leather strap around the body of the buzzard,” he said. “In front of one wing and behind the other. As the buzzard soared away the bell tinkled.”

The other story of the how the belled buzzard got its start caught my eye as it originates from Belton, Texas. (I teach school in the Belton ISD.) In a 1968 interview with the Belton Journal, eighty-year-old Irma Sanford Eddleman was coerced by her daughter to tell a unique story from her childhood. One day (the specific year is not mentioned), a young Irma and her little brother noticed several vultures circling the carcass of a recently deceased chicken that had been disposed of behind their house. “My little brother and I decided to catch one,” Irma said. “I did. It jerked me almost two feet off the ground, trying to get away, and how it stank. But I held on, and sent my brother into the barn to get a length of wire that had a bell on it. We wrapped the wire around that bird’s neck, and let it go. My father worried for days about a bell ringing up in the air; he could hear it in the early morning up in the sky. My brother and I did not say a word.” Ms. Eddleman went on to express regret for the prank. “I’m not at all proud of that,” she said. “It was the unthinking act of a child, and not a kind one.”

While the origin story of the belled buzzard may be hazy, what can be said for sure is that for the better part of four decades sightings of the unfortunate vulture were reported in newspapers on a semi-regular basis. After that, newspaper stories regarding the famous belled buzzard became increasingly rare, though they never went away completely.

As might be expected, the belled buzzard achieved something akin to mythical status among rural Americans living through the heyday of sightings. To some, the appearance of this belled vulture was a harbinger of misfortune or even death. In other places, however, the sighting of the belled buzzard was anything but a bad omen. To some, the appearance of the famous bird over a rural homestead was “regarded as an infallible sign that there was to be an addition to the family. Mothers instead of telling their children of the stork’s visit informed them that the belled buzzard was the bearer of the little one” (Philadelphia Record, 1908). The legend became so well-known that a story, written by Irvin S. Cobb, about it was published in the Saturday Evening Post in 1912. 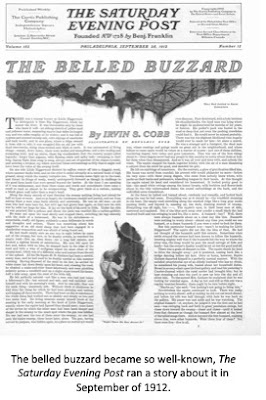 Like today, skeptics abounded during the belled buzzard craze. Witnesses were often ridiculed and public questioning regarding their state of mental health and drinking habits were standard. The possible existence of such a bird was deemed too ridiculous to take seriously and, therefore, had to be figments of fevered/drunken imaginations or outright fabrications. Clark writes in his book, “In 1897, when mystery airships (a late nineteenth-century equivalent to modern UFOs) were reported in various parts of the country, witnesses received the same treatment. In fact, mystery airships and belled buzzards were sometimes mentioned in the same humorous or unflattering sentences.”

As a native Texan, I can tell you that there is no tradition of belling buzzards – nor any other type of bird – here. Neither has it ever been a common practice across the American South or Midwest. I find it plausible – as the previously mentioned origin stories relate - that someone somewhere caught and attached a bell to either a black or turkey vulture at some point as a prank, inadvertently birthing a legend. No doubt, there were some copycats who duplicated the stunt. (It is the only way so many birds could have been seen across such a vast amount of the continent over so many years.) For whatever reason, sightings of belled buzzards are all but non-existent now, but in their day the existence of these mysterious vultures was as hotly debated and controversial as the possible existence of the sasquatch or UFOs are today.

As I close, my mind once again drifts back to that day along the Lampasas River a decade ago. I heard what I heard and numerous vultures were present. Is it possible the belled buzzard – who may have gotten his start in nearby Belton – had returned home after all these years? Surely, not.