A couple of days ago, I was on my way home when I spotted something of interest. I thought the experience could serve as a sort of learning moment for everyone, myself included.

I was at a stop sign at a “T” intersection in a rural area when I spotted a large, black animal with a long tail moving about in some high grass in a field directly in front of me. I was immediately very excited. I have been taking reports from people who claim to have seen black panthers for years but have never seen one myself. Could my time have finally arrived?

Fortunately, I was practicing what I preach about having a camera/video recorder ready at all times and was able to get a video of the animal. That video is below.

As you can see, video does not always do justice to what a witness is seeing. The animal I was viewing was much closer than what it appears in the video. I would estimate the animal was not quite 100 yards away. The creature appears like a tiny speck in the video despite my best effort to zoom in on it.

The animal was easily as large as a Labrador retriever and clearly had a long tail. Was this the elusive black panther I have sought?

Sometimes, a Labrador retriever-sized animal is actually a Labrador retriever. I believe that is what I was looking at as I sat at that intersection. Even if I have the breed wrong, I was clearly seeing a dog of some kind. The way the animal moved, the way it held its tail up, etc. all clearly said “dog” to me. I will admit to being excited upon catching my first glimpse of the animal and had the dog stayed low and retreated into the taller grass I would have been left to wonder what I had seen. Fortunately, it stayed long enough for me to make a clear identification.

So, what is the lesson here? First, keep a camera, phone or some kind of video recorder handy at all times. You just never know when you might come upon something of interest. Even if you are unsure of what your own eyes are seeing, you might be able to figure it out later by examining the video. Second, when you see something of interest, stop. Look at it for as long as you can. Had I simply taken a quick look and then proceeded on my trip home, I would have been left to wonder what that animal might have been. By pausing, the animal eventually revealed its identity. Next, understand that the most common answer is usually the correct one. We have discussed Occam’s Razor here before and I believe it holds true most of the time. Last, be skeptical but open-minded. Imagine if this video had been presented to you. Clearly, there is a large, black, long-tailed animal in the shown. Would you have taken a quick peak and decided “black panther” or would you have said it has to be a dog because there is no such thing as a black panther? Either assumption, jumped to prematurely, is a bad thing. Let it all play out and know that saying, “I don’t know” is not a bad thing. If the dog in this video had not cooperated and stayed in my field of view for as long as it did, I might be saying that to you now.

The term conjures up certain mental images and clichés in all of us. For some, it might be Andy Griffith’s Mayberry that comes to mind, a place where everyone knows everyone else. Maybe a vision of a one- or two-chair barber shop, where all the men gather on Saturday mornings to solve the world’s problems and talk about the high school football game the night before, would occur to some. Still others might think of a quaint corner café on a town square, likely across the street from a courthouse, where the one waitress working calls everyone “Honey” but, somehow, still manages to make you feel special.

Life is not a Norman Rockwell painting, however, no matter how much it may appear to be so, and there is often more going on in a small town than first meets the eye. It is hard to keep a secret when everyone knows everyone else. Gossip and unusual goings-on are discussed voraciously, just not with outsiders. Folks are friendly but will circle the wagons quickly and look at you with a suspicious eye should you ask too many questions about one of their own. It is often difficult to penetrate this wall of suspicion, especially when the subject is something as unusual as a monster; yet, executive producer Nathan Newcomer, director Seth Breedlove and their team have managed to do just that in their new film, Minerva Monster. 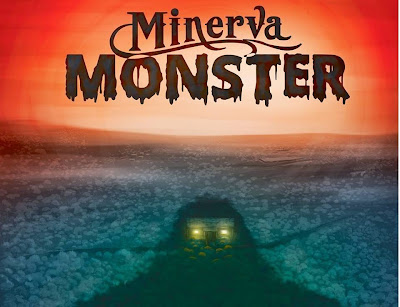 The film documents the goings-on in and near the small town of Minerva, Ohio, back in the summer of 1978. Specifically, the film centers around the experiences of the Cayton family whose home seemed to be at the epicenter of the odd events. Howe Cayton convincingly and effectively relates the events that both terrified and perplexed his family during that summer: the killing of the family dog (broken neck); rocks bombarding the roof of their home from the slope above on an almost nightly basis; something raiding the family’s chicken coop and leaving behind only some brownish hair and a strong stink; and the huge creature that peeked in their kitchen window. Cayton’s story is backed up by James Shannon, Stark County Sheriff’s Deputy and Barbara Galloway, reporter for the Akron Beacon-Journal, both of whom spent quite a bit of time at the Cayton home that summer in an attempt to get to the bottom of what was going on. Deputy Shannon’s recounting is especially effective as he states clearly that he believed the family and smelled the powerful ammonia-like stench left behind by the animal himself.

While the film centers around the events of August, 1978, other Minerva residents share tales and make it clear that odd things were happening in the area as far back as 1956 and continue to this very day. Locals share stories of sightings of hairy figures darting across roads, huge creatures peeking in windows, being chased by hair-covered beings, having rocks thrown at them, finding large human-like footprints in the woods, hearing odd wood knocks and catching glimpses of a huge brown animal rummaging around in the town dump. One account comes from a hunter who spotted a tall, hirsute creature while out hunting with his son in September of 2011.

A unique aspect of the film is that only the voices of the people involved are heard. You never hear the interviewer ask a question. Not once is anyone on camera other than those telling their stories. I found this refreshing as most bigfoot-related programs these days are little more than star vehicles for the hosts or guest “experts” who weigh in with their opinions. The approach is also quite effective. Everyone featured comes across as very normal, sane, and most of all, believable. The matter-of-fact way these people relate their experiences makes them all the more intriguing. The filmmakers do not try to convince anyone of the existence of the Minerva monster, they simply allow the local residents to relate their tales. It is up to individual viewers to ponder for themselves the possibility that such creatures could exist.

The film was very well done from start to finish. The atmosphere created by Breedlove’s cinematography and the music written by Brandon Dalo sets the tone perfectly. The opening sequence is a perfect example of this as shots of everyday items and landscapes are made just slightly ominous by the combination of music and witness testimony looped over them. The sequence was beautiful in its subtlety and reels you in quickly.

If I have a criticism, and I am really picking nits here, it is that a bit too much time is spent after that beautiful opening sequence with local historians and the Mayor of Minerva discussing how the town came to be. I understand why this background is necessary, but it could have been abbreviated just a bit in order to capitalize more on the spectacular opening.

I would highly recommend the film. If you are interested in the bigfoot enigma at all, you need to see it. These are the types of stories investigators hear all the time. What these folks went through back in the summer of 1978 is at the heart of the entire phenomenon: ordinary people who experience something extraordinary and who do not really care if you believe them or not. I would warn you, though, if you are looking for dramatic recreations, over-the-top narration, or a plethora of special effects, Minerva Monster is not for you. If you are, instead, interested in what it is really like to talk to people who have seen and experienced things they cannot explain, give it a look. You will be glad you did.

After seeing Minerva Monster, you might find yourself slowing down a bit as you drive through the rural areas and small towns of our great country, realizing that there is no telling what you might see if you just take the time to look. Too, you will understand there is more to most small towns than meets the eye.

Minerva Monster will debut May 16 at the Ohio Bigfoot Conference. You can order a DVD here.