The Legend of the Oklahoma Octopus

The mid to late 1970’s were a time when the general public was fascinated with dangerous marine life. Steven Spielberg’ Jaws was a mega hit in the summer of 1975 and studios scrambled to make similar films about the horrors that lurked beneath the surface of rivers, lakes and oceans. Films like The Great Alligator (1979), Piranha (1978), Barracuda (1978) and The Deep (1977) capitalized on Jaws mania and moviegoers flocked to the theaters. We just could not get enough. One such film that I remember well was Tentacles (1975). It seemed promising as it featured a giant man- eating octopus and starred actors that I had actually heard of like John Huston, Shelley Winters and Henry Fonda. While the movie was a disappointment, it did make an impression. It led me to look into the question of whether or not the giant squid or a giant octopus might not be the real animal behind the kraken myth and to read all I could about sea monsters in general. I wondered, could a beast like the man-eating octopus depicted possibly be real? 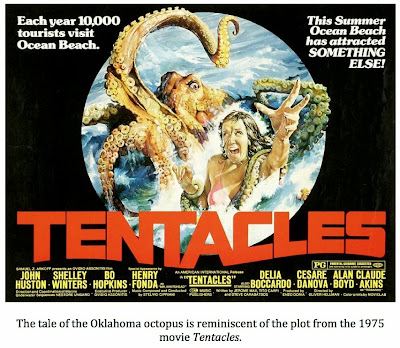 I was reminded of this movie recently when I received an email from a reader asking for my opinion regarding the Oklahoma octopus. I will admit to not knowing much about the story surrounding the alleged octopus-like creature said by some to be prowling several Oklahoma lakes. I had heard a bit about the alleged creature but had not invested any time in looking into the matter. After receiving the email and reminiscing about the summers of my youth filled with movies about aquatic beasts of all kinds, I decided to learn more. I am a sucker for a good story, after all, and this tale fit the bill.

Allegedly, Native American legends going back over 200 years tell of a strange aquatic creature with a taste for human flesh. The beast is described as being the size of a horse, with reddish skin and long arms or tentacles. Today, the creature(s) is said to inhabit both Lake Thunderbird and Lake Ten Killer. According to the myth, both of these lakes have unusually high numbers of drownings and unexplained disappearances of swimmers. The legend was given credibility in the eyes of many when it was featured on an episode of the Animal Planet program Lost Tapes. Is there any truth to any of this? Is there any hard evidence to suggest that an octopus-like creature inhabits these Oklahoma lakes? 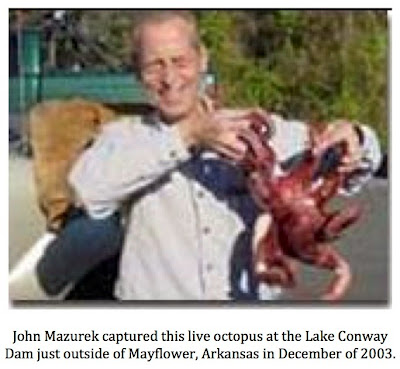 I was not able to find much in the way of evidence. As a matter of fact, I really only came up with one intriguing incident where there is physical evidence of an octopus being pulled from a freshwater reservoir and it occurred in Arkansas, Oklahoma’s neighbor to the east. On December 1, 2003, Illinois resident John Mazurek caught a fair-sized octopus that was clinging to one of the gates of the dam at Lake Conway. Mazurek was out fishing when he spotted the octopus and grabbed it. The catch was confirmed by Arkansas Fish and Game officials who said they had no idea how the octopus found its way into the reservoir. They theorized that someone had kept the octopus as a pet but dumped it in the lake once it grew too large. This certainly makes sense but the dumping would have to have taken place not too long before Mr. Mazurek came along, as the octopus was still alive when he caught it. Just how long a marine octopus could survive in a freshwater reservoir is up for debate but most would agree that it would not be very long. Regardless, the capture of a living octopus in a freshwater impoundment, even if it was in Arkansas and not Oklahoma, lends credence to the legends.

There are numerous problems with the idea of a population of octopus, or any other cephalopod, maintaining a breeding population in an inland freshwater lake or reservoir in Oklahoma. The first, and maybe most damning, fact is that there are no natural lakes in Oklahoma. Zero. Nada. Zilch. Every lake of any size at all in the Sooner State is a man-made reservoir. No lake in Oklahoma goes back long enough to make the alleged 200 year-old Native American legends possible. Lake Thunderbird was impounded between 1962-1965 and Lake Ten Killer, though older, was built between 1947-1952. I suspect strongly that there are no Native American legends about such a beast and that these alleged tales were added by some yarn-spinner in order to make the monster sound more plausible. Supporters of the existence of the Oklahoma octopus would likely defend the myths by stating that the creatures lived in the rivers of the state prior to the impoundment of the reservoirs but this is a tough one to swallow, in my opinion, as I have found zero evidence that suggests Native Americans believed such an animal existed. I have found no documentation of these legends and been unable to find anyone who can tell me what tribe(s) is affiliated with the myths (If I am incorrect on this and there are credible sources documenting tribal legends regarding these creatures, please email me and let me know).

Many will argue that other marine animals can survive just fine in freshwater environments. Certainly, there are some such cases. The bull shark, stingray and, on rare occasions, jellyfish are the poster children for this argument. I would simply counter by asking, is there even one species of cephalopod that has demonstrated this ability anywhere in the world? To my knowledge, the answer is no. I do not feel the bull shark/stingray argument is valid in this case. 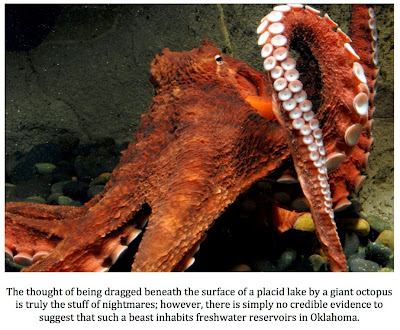 I might be more open-minded to the possibility of a freshwater octopus if the bodies of water they allegedly inhabit were closer to the coast. For example, if a beast like this were being described in the brackish waters of Sabine Lake in southeast Texas, Lake Pontchartrain in southwest Louisiana or even a river or reservoir a bit more inland like Toledo Bend in east Texas, it would be more plausible. Oklahoma is just too far away from a marine environment to be the home of a large breeding population of cephalopods.

Still other hardcore believers in the octopus legend point to the episode of the Animal Planet series Lost Tapes that featured the creature. The episode centers around a rather unconvincing bit of video where a splash is heard and the videographer wheels to his left in time to catch a glimpse of what might be a tentacle sinking back into the water. To be blunt, the Lost Tapes series is a complete farce that falls into the same category of other mockumentaries produced by Animal Planet’s parent, The Discovery Channel, that featured megalodon and mermaids. It is simply a travesty that these programs are produced at all on allegedly educational networks much less that said networks bill them as being factual. Anyone putting their faith in the existence of the Oklahoma octopus based solely on the fact that it was featured on an episode of Lost Tapes is building their argument on a foundation of sand and setting themselves up for embarrassment.

There are other points to be made that make the existence of the Oklahoma octopus unlikely, at best. Most of these points are addressed quite nicely by Elizabeth Bergey, Ph. D of the Oklahoma Biological Survey in the video below. This presentation was created by Matt Korstjens and posted on Caleb Lack’s Great Plains Skeptic website. The video takes a couple of detours regarding other exotic invasive species in North America and the unreliability of eye-witness testimony that are a bit distracting but the interview with Dr. Bergey is solid. Take a look.

Some may think it odd that a guy that believes bigfoot and black panthers are real flesh and blood animals would doubt the existence of another alleged cryptid. That is okay. The truth is that I simply do not believe everything I hear. Even someone as open-minded to the possible existence of undocumented animals as I am needs more to go on that what is available regarding the Oklahoma octopus. Based on what I have been able to find, and it is not much, I do not feel there is anything to the legend. It is too bad really. What a great story it would be. In the end, however, it is almost certainly just that alone, a good story.

The Wisdom of Rene Dahinden


"Something is making those damned tracks."

Enough said.
Posted by Mike at 8:03 AM No comments: