A Bobcat, a Lynx and Occam's Razor

As I mentioned in a previous post, I captured an image of a large cat on one of my game cameras recently. The cat is larger than a typical bobcat and a golden color. It is also very muscular and robust. When I first came across the image I was initially very excited and thought I might have captured an image of one of the two big cats the property owners claim to have seen over the last two years (one tawny-colored cougar and one large, black, long-tailed cat of unknown species). I thought, “I got him!” 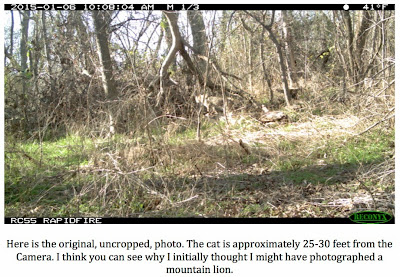 My enthusiasm dampened when I was able to get home and look at the photo on a larger monitor. The cat was, indeed, large and bulky and a tawny color but other characteristics seemed to clearly point to this being a bobcat. The backs of the ears are black and, though it is hard to tell due to increased pixellation in the enlarged image, appear more pointed than the ears of a mountain lion. Too, the coat, while golden in color, appears to have spots and markings typically seen on a bobcat. The markings are not as bold and distinct as those seen on a typical bobcat but they do appear to be there, nonetheless. The clincher is the lack of a long tail. While viewing the original image, I could not tell if the tail was absent or merely curled around the body of the cat or hidden behind foliage. I think it is clear in the enlargement that the tail is present but short and typical of that seen in a bobcat. The case seemed closed. 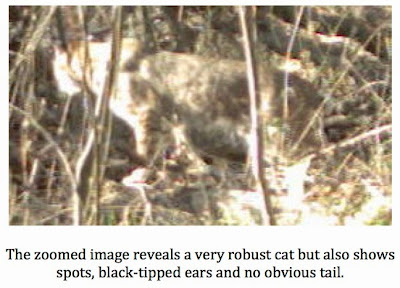 Still, this was an exceptionally robust specimen. The shoulder area is thickly and massively muscled, much more so than I am used to seeing in a bobcat. The bobcats I have photographed over the years, even the bigger ones, are all pretty lean. This guy looks like he is on steroids. The head shape did not seem quite bobcat-like to me, though I admit this could be due to the angle at which the cat was photographed. I decided to show it to some of my fellow NAWAC members and get their opinions. These are men and women who know the woods and the creatures therein. Several are wildlife biologists by trade. They know their stuff. The majority of them felt this was a bobcat, an unusually bulky and robust bobcat, but a bobcat nonetheless. There were a few, though, who felt the bobcat identification was most likely correct but the possibility that this was a mountain lion with its tail obscured by brush, down between its back legs or wrapped around on the opposite side of the body could not be absolutely dismissed due to the musculature exhibited. They were in the minority, however, so I had pretty much settled on this being nothing more than a big bobcat. As is often the case, however, something occurred next that got me rethinking things. 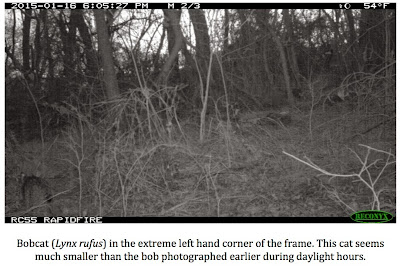 One NAWAC member, with whom I had shared the photos, visited a big cat rescue sanctuary a couple of weeks ago. He showed the photos (he had them on his phone) to several staff members. In all, six staff members were present and viewed the photos. Two of them said this was a bobcat right away but four, the majority, said that this cat looked far more like a lynx to them. One went so far as to say that if they had not known the photo had been taken in Texas they would absolutely say this was a lynx. It should be noted here that this facility houses a lynx as well as several bobcats and the staff is well versed in the differences between the two animals. It brought to mind a story the property owners told me when I first made their acquaintance. They had told me that the previous owner had related to them stories about the wildlife that they occasionally caught glimpses of on the property. They related to me that the previous owner specifically told them to keep an eye out for a lynx. When asked if he meant bobcat, the man said he had those on the property as well but there was a lynx occasionally seen there too. I did not really think much about that story until my friend related the opinion of the staff at the big cat sanctuary. 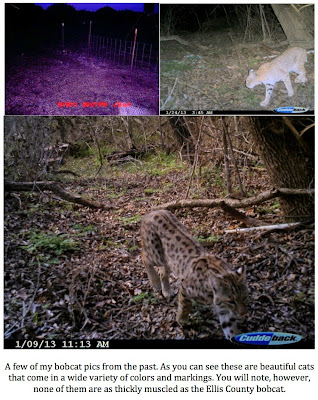 Is it possible? Could a lynx be roaming this part of north-central Texas?

Let’s start with the fact that the word lynx is often used universally to describe any one of two medium-sized wildcats in North America. One, as we have already established is the bobcat (Lynx rufus), the other is the Canada lynx (Lynx canadensis). The bobcat is basically found everywhere. They range from southern Canada, the continental U.S. and northern Mexico. The Canada lynx inhabits forests and tundras across Canada, into Alaska and some northern states. At one time these cats roamed much farther south but were extirpated by human hunting and trapping. Bobcats and Canada lynx are similar in appearance (pointed black-tipped, tufted ears and short “bobbed” tails. The coats of both species vary quite a bit with cats from more forested areas generally being darker while desert dwelling or tundra dwelling specimens are generally lighter. Both species exhibit a wide range of dark spots, bars and markings though the markings on lynx are usually less pronounced. The average lynx is larger than the average bobcat and has much larger and broader feet than its southern cousin. The larger feet help the lynx support its weight on snow. Since the two species look so much alike, it is easy to see why some people use the term lynx interchangeably with both animals.

But could a true Canada lynx be present in Texas?

The answer to that question should be, and probably is, no. There is no population of Canada lynx in Texas; however, they may be closer than many think. In 2010 the Canada lynx was reintroduced in the remote San Juan Mountains of Colorado where they had been absent since the 1970’s. Recovery has been slow. It is estimated that only 141 lynx litters were born between 2003-2010. Even so, wildlife officials have stated that the survival rates of these cats are outpacing the mortality rate. Possible evidence of this is a recent lynx sighting in southwest Colorado. A passing motorist snapped the photo below of what are clearly two Canada lynx. The San Juans are roughly 800 miles from the property where I have my cameras but only 300 miles from the Texas Panhandle border. Could a lynx have made its way into the panhandle and then meandered all the way to north-central Texas? Unlikely but, I suppose it is possible, if just barely so. 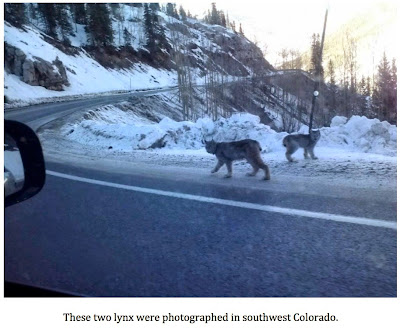 What about the old standby for anomalous cat sightings? The “it is an escaped or released exotic pet” explanation? Normally, I loathe this reasoning, as it is the most common line heard from wildlife officials when a mountain lion or black panther is reported. In the case of a possible lynx sighting, however, I must entertain it as a possibility. Both lynx and bobcat kittens are not hard to come by or acquire. They are also relatively cheap and cost less than some domestic cat and/or dog breeds. The average price I found was in the $1500-$1700 range. These are medium-sized animals and do not necessarily have to have the large enclosures of exotic big cats. They are billed by these kitten brokers as being “loving, loyal and, when tamed properly, extremely tolerant of other animals.” Personally, I do not approve of owning any sort of wild animal as a pet; however, many others do not share this opinion and the trade has thrived. Ownership of bobcats and lynx is much more common than ownership of larger cats like leopards or cougars. I suspect some of these owners have found their pets to be less “loving and loyal” than they expected and have turned them loose. It would be easier to justify dumping a bobcat or lynx than releasing a true exotic cat like a leopard or tiger. They are, after all, native to North America and far less dangerous to people. It is not implausible, to me at least, to think a pet lynx was released in or near my study site. Again, maybe not likely, but not completely out of the question. 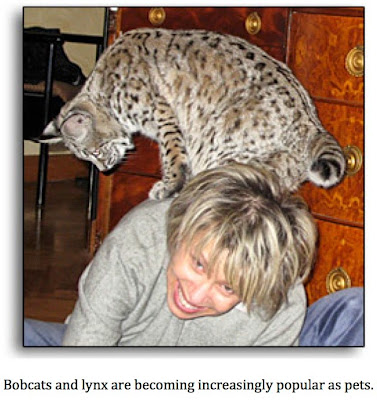 All of that being said, I will paraphrase Occam’s razor and say that the simplest explanation is usually the correct explanation. The theory that a wild Canada lynx found its way to Texas requires a whole lot of faith. The escaped pet theory, while more plausible in my mind, still is a bit of a stretch. No, the most likely answer, requiring the fewest assumptions and least amount of speculation, is that I photographed a bobcat. It is one heck of a bobcat, bigger and more muscular than most but, still, a bobcat. There is plenty to eat out there and this cat is in his prime and reaping the benefits of a healthy environment.

My cameras remain in place, documenting the wildlife of this remarkable piece of land. Until, and unless, I get another photo of this cat that changes my mind, a bobcat it is. I just cannot go out on that lynx limb right now no matter how exciting it would be to document the species here in Texas. It is just too big a leap.

Darn that Occam and his razor.
Posted by Mike at 7:02 PM 5 comments: 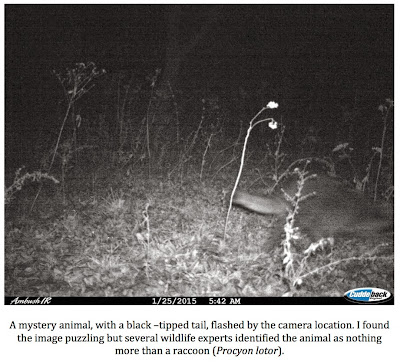 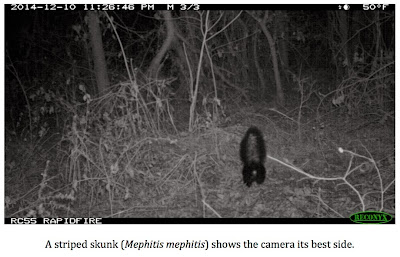 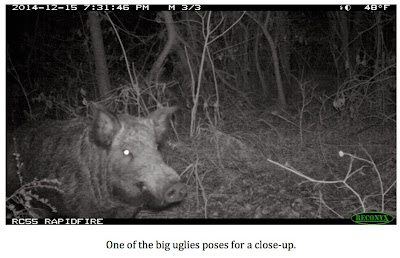 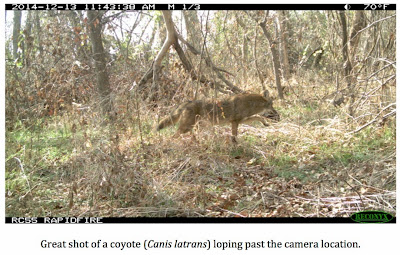 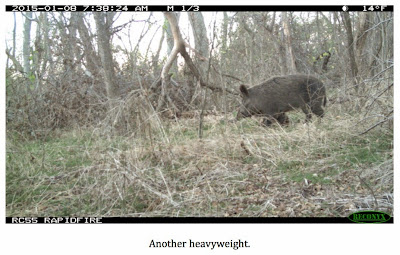 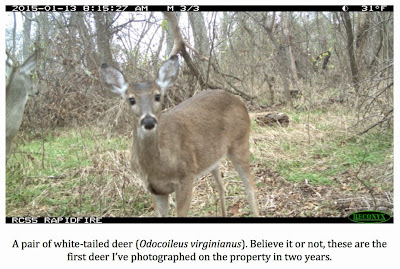 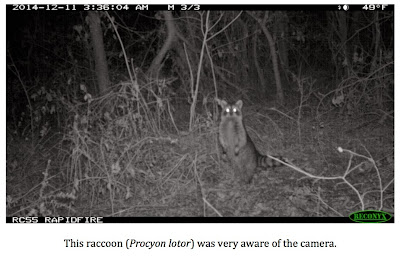 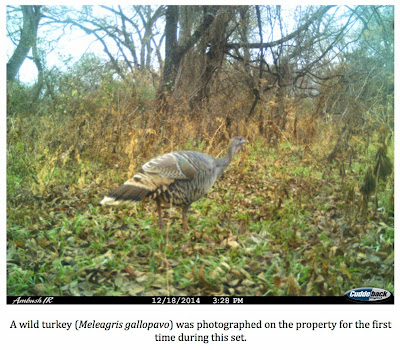 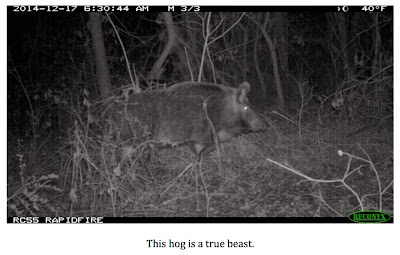