I received an email two weeks ago from a gentleman requesting that I call him. I did and it turns out he wanted to question me about “black panthers” and whether or not they have ever been seen near the area where he makes his home. I gave him my opinion on what I believe these animals to be and told him that they have been reported on multiple occasions near his location. He then shared with me that there had been two visuals on his property in the last week. His wife saw what she called a black panther just before turning onto their property and he and a friend saw a large, black, long-tailed cat matching the description she gave only a few days later after entering the property gate. At most, the sighting locations were no more than 1/4 mile apart and separated in time by only a few days. I was greatly intrigued and was especially excited as the area where the sightings took place is only about a 30-minute drive from my home. I asked if he would be open my visiting the property and putting up a couple of game cameras. He was very gracious and said he would, indeed, like it if I came out and put up a couple of cameras. 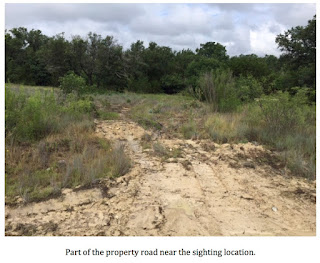 Two days later, I made my way out to the property (I will keep the exact location confidential for the time being). It was more difficult to get there than it normally would have been due to recent flooding. I encountered road closures, due to high water, on the first two routes I tried. Finally, after taking a rather circuitous route that added quite a bit of distance to the drive, I was able to get to the property. A theory began to form in my mind as I encountered these flooded roads. I felt it was very possible that this animal, whatever it was, had been using the river bottoms (again, I will withhold the name of the river as it could compromise the location of the property) as a travel route or, possibly, as its home and was forced to higher ground by the rising water. I have no way of proving this hypothesis, but it seems reasonable.

Once on site, I met the property owner and a friend of his who had been with him when the visual had taken place. They showed me the layout of the property and gave me a tour of the entire place via ATV. All together, the property belonging to the witness is made up of only 30 acres; however, family and close friends own the surrounding property. All together there are about 300 acres of undeveloped, mostly wild land on site, some of which that is only a few hundred yards from the river. 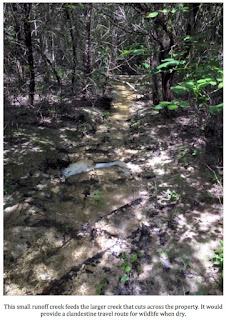 After the tour, we returned to the sighting location and set about looking for any sign. The property owner had seen some tracks on the dirt road that connects his land to the main road shortly after his sighting but heavy rains since had washed them out. He did have some photos but the tracks, while clearly there, were a bit indistinct. What was interesting were that there were two sets of tracks. One set of tracks was large and the other set significantly smaller. At one point, the smaller set of tracks disappeared from the muddy road, just vanished, while the larger set continued. It was posited by the property owner that, perhaps, the smaller animal was a cub and the mother had picked it up in her mouth upon hearing the vehicle approach and then bolted into the brush. He admitted to not having noticed a cub being carried at the time of the visual but stated the whole incident had only lasted a few seconds. 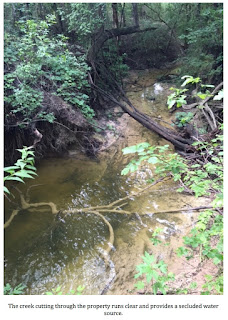 It was suggested that we go into the woods and have a look around. The property owner was all for it but did stress he felt that what he had seen could potentially be dangerous. He returned to the ATV to retrieve a machete and then took a look at the holstered pistol on my hip and asked, “Are you handy with that weapon?” I reassured him that I was and he said, “Ok.” The three of us then went “brush busting” into the heavily wooded area where the cat had retreated after crossing the road. The area was incredibly dense and gnarly. Initially, near the road, cedar and mesquite trees dominated. Vines, of both the thorny and wild grape variety, made walking tough. After about a hundred yards, maybe less, as we approached a live creek, hardwood trees began to appear. This made the walking a bit easier. The creek was pristine and animal sign abundant. As a matter of fact, we came upon a fawn bedded down in deep brush on the opposite side of the creek. We were able to get within 10-feet of it before it bolted (just before I snapped a picture of it, naturally). Sign of deer, opossum, raccoons, fox, coyote and bobcats were found but nothing to indicate the presence of a large cat. We did find a spot where it looked like something had vomited. It was quite the smelly mess but there was no way to identify what might have been responsible for it. 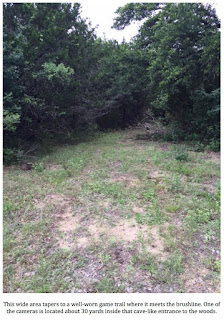 I placed two cameras in the woods near the creek and close to the two sighting locations along an established game trail that cut through the brush. I advised the property owner to go about his business as usual but not to go looking about in the woods near the cameras, as we wanted things in that area to get back to normal as quickly as possible. He agreed and we retreated back to the dirt road where the trucks were parked. At that time, I questioned him one more time about what he had seen. His description remained consistent; a very large, solid black cat with a long tail. He said it looked like it was half as long, from head to tail, as the dirt road was wide (this would be about 6-feet). The visual took place between 9:00 and 10:00 a.m. in broad daylight. There was no mistaking the color due to low or poor lighting conditions. “That cat was coal black,” he said.

I thanked him for his hospitality and for granting me access to the property whenever I wanted and made my way home. The water in the area has receded quite a bit, to the point the roads are all open again, but remain much higher than normal. I am hoping these conditions keep this animal on the property long enough for me to get a photo.
Posted by Mike at 11:54 AM No comments: