Swimming and Spear Fishing in Borneo 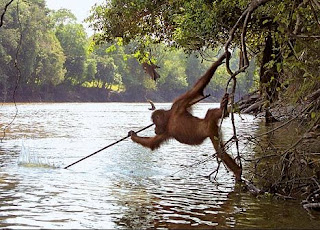 Two recent articles published by the London Daily News on their Mail Online website chronicle two more fascinating discoveries regarding the behavior of a known great ape species. Once again, the ape species being observed is the orangutan. In this case the orangutans observed were all located at a rehabilitation center in Borneo on the island of Kaja.

The first article was actually published back in April of this year and features an incredible photograph showing a male orangutan hanging from a vine and attempting to spear fish in the river below. According to the article, the apes in the Kaja rehabilitation center have observed the locals spear fishing in the Gongho River. The spear fishing attempts were not successful. The skill proved too tough even for the intelligent orangutan to master. The ape actually sort of flailed at the fish passing below him rather than use a spearing type motion. However, if you look at the photo you will notice he is not holding the stick like a club and just slapping the water. The grip being used does look to be the correct one for spearing. Given time, in my opinion, this male orangutan would likely have figured out the more efficient spearing motion.

The second article, published on June 9 of this year, was written by David Derbyshire and features a terrific series of photographs by Ardiles Rante showing orangutans that, seemingly, have overcome their natural fear of water. The apes are shown frolicking in the water and, according to Derbyshire, did everything from diving into deep water, paddling back and forth across the river, and swinging into the water from overhanging branches. Some of the orangutans were more adventurous than others. Most stayed close to the bank and held onto overhanging limbs or vines with at least one hand while wading. Still, even this behavior is something rarely seen. Orangutans usually have a very strong fear of the water and the predators, such as crocodiles, that potentially lurk there. "This is a rarity - to see orangutans coming down for a swim is unheard of in the wild," said Simon Husson, a consultant with the Borneo Orangutan Survival Foundation.

I would be more enthused, however, if the behaviors had truly been observed in the wild. Each of the apes at the Kaja Island rehabilitation facility are rescues taken from areas decimated by logging. In addition, the area near the rehabilitation center has a crocodile population of near zero. It is thought this lack of crocodiles has been noticed by the apes and helped embolden them in their aquatic activities. Add to these facts that the apes are not having to work very hard for food. The necessity of foraging for food for hours a day is absent leaving the orangutans with more free time to experiment with new things. In fact, Husson stated, "The islands on which these orangutans have been placed to prepare them to be released back into the wild have more and better food resources than the average forest, so it is unsurprising that these apes are trying out different things - like swimming."

The behaviors described in the two articles are truly impressive. Once again, behaviors never before seen in the great apes have been documented. Not so long ago, the scientific establishment would have scoffed at any indigenous accounts of orangutans performing these feats. I am more impressed with the attempt of the lone male orangutan to spear fish than I am by the "swimming" behaviors shown by his fellow apes. If nothing else, the behavior shows how observant this species can be. Orangutans truly are the "thinkers of the jungle". This male watched, learned, and attempted to mimic the behavior of local fisherman. This is no small thing. I am impressed with how the other apes overcame their natural fear of water, however. While many of the natural hazards they would normally face in the wild were absent and it appears, due to the presence of corn in the river as shown in some of the photographs, that they might have been "encouraged" to go into the water, it is still impressive that the orangutans on the island could overcome their natural fear and enter the river. Some sort of realization that crocodiles were absent must have taken place. This would require a level of awareness that, until previously, was not recognized in the great apes.

I do find a possible connection to alleged sasquatch actions in the behaviors exhibited by these orangutans. Witnesses have reported seeing sasquatches attempting to fish, wade, and swim. The recent MonsterQuest episode focusing on the "Mysterious Ape Island" tells of sightings of the sasquatch on, as the title suggests, an island. If the tales are credible enough to warrant investigation then one would also have to ponder how such a creature could have possibly come to be on this island. Swimming would seem to be a natural conclusion at which to arrive. As stated previously, not too long ago, reports of swimming or spear fishing orangutans would have been scoffed at by the scientific community as a whole as being too unbelievable. It has now been proven that great apes, under certain conditions, can and do things considered atypical and extraordinary. It has also been proven that the great apes do think, problem solve, exhibit an understanding of time, circumstances, cause and affect, and self awareness thought to be beyond them by scientists for literally decades. As science alters its' view of what is possible for the various great ape species maybe it will also alter its' view on allegedly observed sasquatch behaviors previously deemed too fantastic to possibly be true.

Is this too much to ask? Possibly. However, recent events, which I will post about shortly, give me hope that the climate may be changing in regard to this subject. That is climate change we could all be happy about.
Posted by Mike at 12:08 AM No comments:

What is it? Update Part 2

You may remember back in February that a body of some sort was found floating in the Big Black River in Mississippi. A quick recap: The carcass was spotted by a father and son looking through rifle scopes. They felt it looked enough like a human to alert the authorities. Twenty law enforcement officials quickly responded to the call. Apparently, they, too, assumed the corpse was human. The body was fished out of the river, bagged, and sent off to the Warren County Coroner's Office for autopsy. The determination that the body was not human was not made until the early stages of the autopsy conducted at the crime lab in Jackson. Warren County Sheriff Martin Pace then came out with the following statement: "It is not human. I repeat, it is not human." This statement ignited speculation over just what was actually found in the Big Black River. You can review the initial article in The Vicksburg Post here.

David Paulides of the North America Bigfoot Search (NABS) organization has posted an interesting follow up to this story. Apparently, he and some NABS members conducted a fairly extensive follow-up investigation on this incident. What he relates in his write-up on this investigation is pretty interesting. Paulides writes that his team was repeatedly stone walled and given the run around before finally getting some information. In the beginning it reads like something out of a bigfoot conspiracy theorists textbook. It was only after one of the NABS team members identified himself as a former law enforcement officer that some interesting information was allegedly revealed. You can access the report on the NABS site here. Scroll down to Blog #52 for the report.

So, as the dust settles on this one, we still don't know what it was that was bobbing around in the Big Black River of Mississippi. I have friends in law enforcement and a family member who works in a county forensics lab who tell me that bodies that spend much time in water can quickly become very nasty and not easily recognized. I can buy this up to a point. I can totally see how the father and son who spotted the torso might not be able to determine whether it was human or animal. This is especially true if they viewed the body only from a distance using their scopes. It is unclear in the report if they ever actually approached the body. I can even buy the fact that the carcass was so degraded that twenty law enforcement officers had a hard time recognizing it. What I find hard to swallow is how the coroner's personnel could not tell the body was not human. Animals like cows or deer, the most likely suspects according to Paulides source, have laterally compressed chests and rib cages that are narrow and deep. Humans, and apes, have wide dorso-ventrally compressed chests. These differences are not insignificant and should have made it readily apparent that the body was not a human. This identification should have been made in the field.

The entire episode is very strange. The failure to identify the carcass as non-human in the field, the evasiveness of the officials when questioned by NABS members, and the quick disposal of the body to an unknown location will continue to fuel speculation for a good while among those who follow such things. Ultimately, however, this story will quietly fade away and be forgotten. Maybe it should do just that....or maybe not.
Posted by Mike at 5:50 PM 1 comment: