I have been on something of a hiatus over the last couple of months. There are a lot of reasons for this but have found myself in a slightly better position as far as actually having time to write of late and am itching to get back to it. Please understand, my lack of activity of late does not signal a lack of interest on my part. Now, having said all of that, let’s get to it.

Reports of anomalous black cats, large in size with long tails, continue to pour in to me via email, comments to posts, Twitter and Facebook. I need to catch all of you up on these reports and thought I would work backwards to do so. What I mean by that is that I will be presenting the latest reports to you first and, over the next several weeks, get you caught up on the backlog.

Before we begin, let me repeat a few things that I have said before. I know that there is no such animal as a “black panther.” The known big cats that have been given this moniker are either African leopards or New World jaguars exhibiting melanism. So, when I use the term “black panther,” realize it is a colloquialism, a catchall phrase, if you will, that is commonly used in Texas and the Deep South to describe any large, black or very dark, long-tailed cat.

Now, on to the reports.

“I live near Danbury,Tx near a bayou, while on my tractor recently I thought I saw a black Labrador retriever, but when it moved I thought it was a river otter which I've seen on occasion. The animal crossed in front of me and was definitely a large cat with a long tail, now I know it was a Jaguarondi.I have talked with several old timers here and many have seen as kids and called them simply the big black cats with long tails. Several lived near Liverpool,Tx and spotted the cats near rice fields. Hopefully they are making a come back."

TCH Comment: I really like this kind of report. This witness saw something unusual and did his own research to find out what it was he had seen. From his description of the appearance of the animal and the otter-like movement described, I have little doubt that he is correct in his conclusion and did, in fact, see a jaguarundi.

Danbury sits in Brazoria County along the Texas Gulf Coast and on the edge of Flores Bayou (I assume this is the bayou the witness mentioned in his report). This area is farther north than the generally accepted range of the jaguarundi but not so far as to be out of the question. Certainly, the habitat is adequate to support a small population of these cats. Personally, I feel the jaguarundi roams much farther north and away from the coast than officials believe. This report seems credible and I will add it to my black panther distribution map. 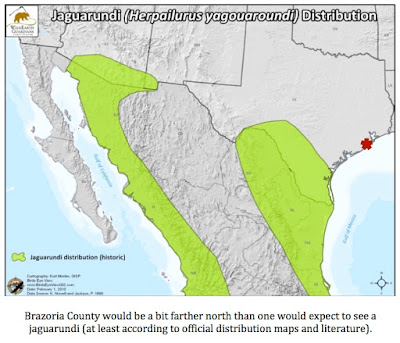 “So, I live in Shepherd Tx and come home from work every night between 3:30 & 4:30 am. I live literally right next to Sam Houston National Forest. On my way home tonight, I had just turned off of hwy 2025 onto fm 2666 and saw a large black cat in the grass between the road and the forest. It was clearly a black cat but I could not see its face. It did have a long tail. Could this have been what I would call a panther? Do they live in the national forest here?”

TCH Comment: I am a bit dubious about this report, not because I do not believe the witness, but because, in my opinion, the possibility of mistaken identity is strong in this case. The witness states it was clearly a large black cat but admits to not having seen the face of the animal. This makes a positive identification of the animal all but impossible. I assume the witness is basing his belief that what he saw was a cat based on other factors such as the way it moved and the long tail described. Certainly, many people can detect the difference between the way a feline moves and the way a canid moves but the fact that the head and face of the animal was not clearly seen clouds the identification.

Having said all of that, the Sam Houston National Forest, and east and southeast Texas in general, have a long history of black panther sightings. To the locals, these cryptid cats are not mysterious at all and are just a part of the region’s fauna. This witness may very well have spotted one of these phantom cats but, due to the factors mentioned above, there remains a large enough possibility for misidentification that I will leave this sighting off of my black panther distribution map. 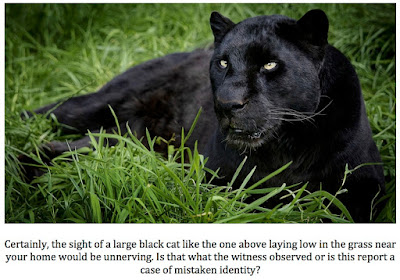 “I was walking with my daughter on a walking trail (inside the city limits) of Jacksboro Tx,January 2015, we had wandered off of the trail for about 45 min when we returned to the trail something caught my eye about 75 yards up the trail, I watched it as it was moving away from us up the trail, it was not running but it was walking fast, I yelled at it and it turned sideways looked at us, took about 6 steps toward us and ducked into the bushes, we both got a good look at it it was black as coal and has no fear of humans, I assume that we had disturbed it in the woods and we're lucky enough to see it when we were leaving, as with most people who have had a similar sighting I was blown away by what I saw and didn't get a chance to take a picture, it was not a miss identification, it was in broad daylight, with plenty of time to watch it as it moved, anyone who says that these animals are not real are wrong, and most people in my situation probably wouldn't take the time to try to take pictures, these are powerful animals that can easily kill you.”


TCH Comment: Jacksboro is the county seat of Jack County and sits roughly 60-70 miles NW of Fort Worth. U.S. Highway 281 bisects the small town that was established between the Lost Creek and the west fork of Keechi Creek. Jack County is sparsely populated with an average of only 10 people per square mile according to the 2000 census. In addition to the two creeks mentioned above, the West Fork of the Trinity River cuts across Jack County diagonally from northwest to southeast and provides the main drainage for the county. Many other creeks cut through the county, which is also home to Lake Bridgeport and Lake Jacksboro. So, despite the county sitting in a relatively arid part of the state, there is ample water in the county to support a wide variety of wildlife. There is also much more forest than one might expect, especially along the various waterways. Dominant trees are mesquite, live oak, blackjack oak, post oak, elm, pecan and walnut. These hardwoods provide a rich environment that supports a healthy white-tail deer and feral hog population which a large predator could prey upon.

This witness failed to give a lot of detail about the animal he saw but seemed impressed enough with its size to make a determination that it was no domestic cat and it was possibly a threat to him and his child. I have had several interesting accounts concerning cryptid cats come out of Jack County in the past and this one is fairly typical of the experiences of the other witnesses. What was it? The witness stresses it was black as coal and that it was broad daylight. Certainly, that would seem to take a mountain lion out of the equation. Jaguarundi? Possibly, but the witness seemed rattled by the size of the animal. While he doesn’t say so explicitly, this would likely indicate something larger than the typical jaguarondi. That being the case, I will add this sighting to my black panther distribution map. 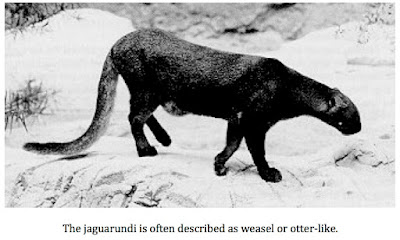 I will continue to update the blog with the backlog of reports at least weekly until I get all of you caught up. In the meantime, please keep me informed of any sightings out there. I really would like to get to the bottom of this black panther mystery in 2016.

*ADDENDUM* - I will be updating my black panther sightings distribution map shortly. Once it is ready, I will post it here online. In addition, I plan on going back and making a separate map showing sightings by county. This will dial in the areas of sightings a bit more and, hopefully, allow some patterns to emerge.
Posted by Mike at 12:03 PM 17 comments: