Texas has a pig problem.

According to Mike Leggett, writing in the April 2014 issue of Texas Co-op Power magazine, the population of wild, or feral, hogs in the U.S. has been estimated at 4-5 million animals, with at least half of them in Texas. The problem has gone beyond jokes about the coming “aporkalypse” and something that affected only the most rural of farms and has become a serious financial issue that costs Texas $500 million in annual statewide economic losses, according to the Texas A&M AgriLife Extension Service. Billy Higginbotham, an AgriLife Extension biologist in Overton, Texas, was was quoted in Leggett’s article as saying, “I always say there are two kinds of landowners in Texas, those that have pigs and those that are going to have pigs. We have an estimate of 2.6 million wild pigs in Texas. That’s with a margin for error of half a million on either side.” 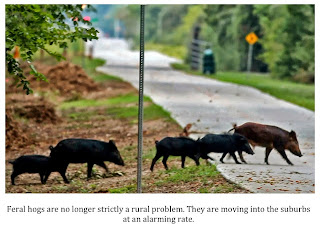 How bad is it?

The hog problem is pretty bad and getting worse. Wild hogs have been documented in 253 of 254 Texas counties. Only El Paso County has yet to confirm hogs, but few folks doubt they are there, too. The population, is growing at a ridiculous rate estimated at 21% a year. When one remembers the population of feral hogs in Texas is already at an estimated 2.5-2.6 million then you realize the issue the Lone Star State is facing. Unless the wild pig population is reduced by a staggering 70% per year, EVERY year, their numbers will continue to increase and the spaces needed to occupy them will increase as well.

“This is the most prolific large animal on the face of the earth. They’re not born pregnant, but it is close.” 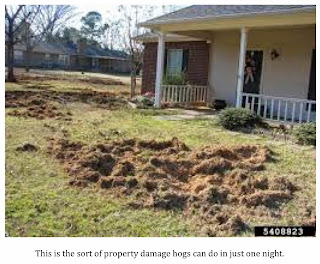 What are the specific problems caused by wild hogs?

As mentioned previously, hogs account for $500 million in economic losses for Texas every year. They are omnivorous and root in pastures, yards, fields, the greens and fairways of golf courses and just about anywhere else where there is a patch of vegetation. They eat grasses , roots, tubers, shoots, acorns, fruits, bulbs, mushrooms, grubs and just about anything else. Hogs will dig up huge tracts of land in order to find these delicacies, leaving holes up to a foot in depth behind. This results in torn up yards and pastures. These holes often cause damage to mowers, tractors, tillers and the like. If the hogs choose to root in a cultivated field, the cash crop there is totally destroyed. The losses can get into the tens of thousands for individual landowners. Golf course superintendents and grounds keepers are beginning to be among the most vocal when it comes to the feral hog problem in Texas. It is easy to see why when rebuilding just one green on an eighteen hole golf course can run as much as $50,000. Once rebuilt, there is no guarantee that the hogs won’t return to wreak havoc again.

The hogs are beginning to cause water quality issues here in Texas as well. If there is one urgent and pressing problem in Texas, it is the issue of water. We simply do not have enough of it for our growing population. Now the water we do have is being fouled by hogs. These pigs thrive near rivers, creeks and reservoirs. They are not very discriminating about where they deposit their feces. In addition to the introduction of hog fecal matter into Texas watersheds, the rooting done by these hogs near the waterways is causing all manner of erosion. Without vegetation to hold the soil in place, that soil, and all the fertilizers, bovine waste, etc. washes into the waterways. “It’s a pretty big problem here,” said Richard Parrish, a Hays County AgriLife Extension agent. “We have yards and pastures dug up by pigs, We’re also seeing rooting in creekside areas, and that’s creating water quality and environmental problems.” Wild hogs carry at least 15 known diseases, the worst of which are probably pseudo rabies and swine brucellosis. Both of these diseases can be transmitted to humans and cause flu-like symptoms that can linger for weeks.

“The average litter for a wild sow is five to six pigs, and eight survive.”

Yes. Feral hogs are extremely adaptable. The fact that they can thrive in virtually every county in a state as large and geographically diverse as Texas proves that. Dark river bottoms, arid deserts, piney woods, swamps and grasslands are all prime hog habitat. The presence of these pigs is anathema to the white-tailed deer population. The hogs are in direct competition with the deer for resources and are overwhelming their rivals with sheer numbers. This is costing landowners, who lease access to their property each year to deer hunters, money. It is estimated that Texas landowners take in nearly $1 billion annually in lease fees. Once a piece of land has been overrun by hogs, it isn’t nearly as valuable. It is true that some money can be recouped by leasing to hog hunters, but landowners can’t charge nearly as much for the privilege of hunting hogs as they can for trophy deer. 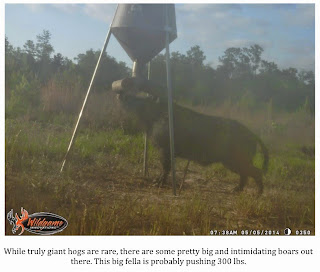 How big do they get? Are they dangerous?

Most of the feral hogs in Texas don’t get much heavier than 175 lbs. A truly big boar might get up to 300 lbs. or so. Certainly, there are outliers that are bigger than that and reports of “hogzillas” often travel like wildfire across the internet. Most of the time, the size of these monsters is at least somewhat exaggerated but huge pigs do show their snouts from time to time. Wild hogs can be dangerous but that doesn’t really make them much different than any other wild animal. Typically, there isn’t too much to worry about as these hogs have become mostly nocturnal across the state. Problems can occur when you approach a hog from downwind. The sense of small of a feral hog is truly astounding but their eyesight is poor and their hearing is nothing exceptional. If the hogs cannot smell you, it is possible to blunder extremely close to one. These situations can get ugly in a hurry as these hogs pack some very sharp tusks or “cutters.” Certainly, this sort of scenario is the exception and the main issues with these invasive non-native animals are financial in nature. 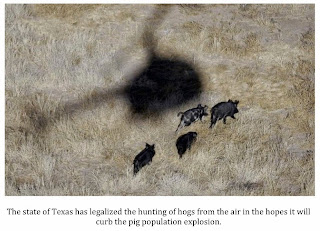 What can be done?

Nobody really seems too sure. The Texas Legislature passed the “Pork Chopper” bill into law in 2011. This law made it legal for landowners to allow hunters, riding in permitted helicopters, to shoot hogs from the air. It is estimated that in the first two years of aerial gunning netted 24,000 hogs. The state is also training landowners in the use of various trapping methods and allows for a limited number of hogs to be sold to federally approved, and permitted, pork processors. Commercial pig processors took in 640,000 Texas feral hogs between 2004 and 2009. Trapping is difficult, however, and these pigs are smart. Tactics must be changed often or the hogs learn to avoid the traps. In addition, I would recommend that any licensed hunter shoot any and all hogs on site regardless of whether they set out to do so or not. There is no season on feral hogs in Texas and no special permit or stamp is required to hunt them. This must be done if there is to be any hope of controlling the wild hog population in the Lone Star State.

Most people are aware that the state of Florida is battling an invasive species that is threatening to wreck local ecosystems and wipe out populations of native animals. Since these animals are aliens, there are no natural predators to help check their numbers and they threaten to overrun the Sunshine State. Though it fits the bill, I’m not talking about the Burmese python (Python bivittatus) that is causing all sorts of problems in the Everglades and other parts of the state. I’m talking about a different, and less publicized invasive reptile, the tegu. 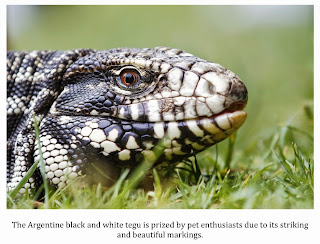 While there are several types of tegu, the real problem in Florida seems to be the Argentine black and white tegu (Tupinambis merianae). As their name suggests, these lizards are native to the tropical rain forests, savannas and semideserts of east and central South America. In their natural habitats, these lizards fill the same niche that monitor lizards fill in Asia. Tegu are omnivorous, eating a wide variety of plants and animals. In the wild, this would include insects, fruit, birds, eggs and even hard-shelled and bony animals like turtles.

The Argentine black and white tegu is especially prized as a pet. They are strikingly marked and quite beautiful. They are intelligent and many report they actually seek out attention from owners that handle them properly. Unfortunately, as with many other exotic pets, they get to be quite a handful when full grown and expensive to feed and house. A male tegu can reach a length in excess of 4 feet. Females often exceed 3 feet in length. Many owners, either thinking they are being humane by not euthaninzing their pet or who are simply too lazy to seek a new home for their animal, simply release these large reptiles into the wild. 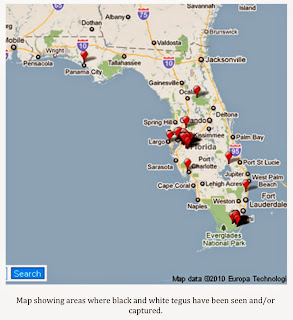 Tessie Offner, a wildlife biologist for the Florida Fish and Wildlife Conservation Commission is quoted in a USA Today article as saying , “People buy these cute little lizards at the pet store and then they grow to be too big for an aquarium and they are too expensive to feed and then they just set them free in the preserves.”

Offner has spent the better part of three years tracking down invasive tegus and says their population is growing. “They reproduce rapidly, laying between 25-50 eggs at a time,” she said. With no known predators in the Florida ecosystem, it isn’t hard to imagine the damage these tegus may do in time. “They eat everything from plants to other animals with bones and shells – also, amphibians and birds,” says Offner.

Indeed, the stomach of a black and white tegu is equipped to handle the boniest of prey and even those with hard shells. Marvel Stewart, a volunteer at a Florida horse rescue site near Lithia, said, “We had a gopher turtle preserve on our 1,100 acres and now they are all gone. We see 4-5 (Tegus) per week on our property.” The tegus have grown increasingly bold and even burrowed into the horse enclosures on the property.

As mentioned previously, the whole situation with the black and white tegus mirrors that the Everglades is facing with Burmese pythons. Large, aggressive predators with no natural enemies can wreak havoc on a native ecosystem and should NEVER be released into the wild. I strongly urge any pet owner that finds him or herself in a situation where they can no longer take care of a large exotic animal to contact their local animal control department, zoo or even pet store to explore different options for relocating it. It may seem harmless and more humane to dump a snake or lizard into a forest or swamp when it faces the possibility of being euthanized, but it is not. What the pet owner must consider are the lives of all the native animals that will be affected if their exotic manages to find a mate and breed. Pet owners are usually true lovers of all kinds of animals. That being the case, it isn’t hard to see what is best for the environment and the native species that live there.