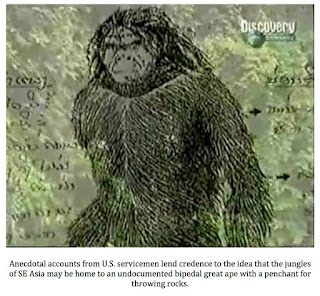 Rattlesnakes are nothing new to Texans. While dangerous, most would agree that the fearsome reputation of these snakes is completely overblown. Certainly, they are capable of doing great harm and are to be respected and left alone; however, when encountered, 99% of the time all they want to do is to get away. That being said, some Texans are beginning to see some changes in not only the behavior of rattlesnakes in the Lone Star State but in their appearance as well.

The buzz of a rattler's tail is something that you know instantly, whether you have ever heard it in person before or not. It is something that causes people to freeze in their tracks and slowly retreat from the area holding the snake. The rattling often keeps the snake and the human interloper safe. Something has changed, though, and fewer and fewer Lone Star rattlesnakes are giving their universally recognized warning.

“Behaviorally, the biggest change we are seeing in the Western diamondback is the reluctance to buzz or rattle,” said herpetologist Sid Finch of Caprock University. “More and more of them are staying quiet and behaving in a more stealthy and menacing manner.” 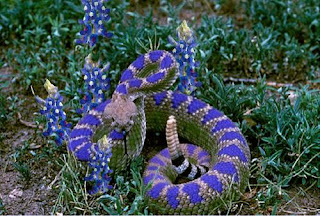 The reason for this change in behavior is debatable but most agree it is likely a combination of two factors that are the leading causes: rattlesnake roundups and feral hogs.

Finch said, “The explosion in popularity of these rattlesnake roundups has put a great deal of stress on the population. The snakes have learned that the loud individuals get taken away and only the quiet ones survive.” Finch continued, “If only the snakes who are more wary and quiet survive and breed, then their offspring are going to exhibit that trait as well.”

Feral hogs are playing a part in behavioral changes as well, according to Finch. “Hogs eat snakes. A rattlesnake buzzing its tail might as well be ringing the dinner bell for a hog,” he said. “This is another stressor on the population which has accelerated the learning curve of these snakes.”

As disturbing as the thought of a rattlesnake that does not give you a warning before striking might be, at least these Western diamondbacks still look the same and are easily recognizable. That is not the case in the eastern portion of the state where a new type of rattlesnake has appeared, seemingly out of nowhere, over the last ten years.

Finch explains, “The Bluebonnet rattlesnake is truly a remarkable case study, a miracle of evolution, if you will. The coloration, behavior and, it seems, seasonal appearance is unparalleled in snake annals.” 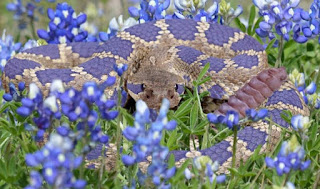 The Bluebonnet rattlesnake, as it has been dubbed, appears only in the spring months when the brush and trees begin to leaf out and the wildflowers start to bloom. The snake has a classic diamondback shaped pattern but the coloration is startlingly different. The Bluebonnet rattlesnake has purplish-blue markings that allow it to blend into the vast fields of Texas bluebonnets that pop up in the early spring. It is a strikingly beautiful animal but one that has been responsible for much heartache. It is a tradition in Texas for families to find a patch of bluebonnets and sit their young children in them in order to take a truly original Texas-style photo. Numerous children have suffered bites during these photo shoots and fear is starting to keep Texans from enjoying the treasure that is the official flower of the Lone Star State.

“Next to the coloration, the oddest thing about this snake is that it completely vanishes once summer sets in,” said Finch. “We have no idea where it goes. It just seems that when the bluebonnets are gone, so is the snake. It is quite remarkable.”

The next time you are out hiking in west Texas be sure and watch your step as you may not get a warning from the suddenly silent population of Western diamondbacks in the region. Those in central and east Texas need to be even more careful, as the Bluebonnet rattlesnake seems to have actually earned its nasty reputation.

Be careful out there.