Following are the latest handful of black panther sighting reports sent in by readers. I continue to get reports from people who claim visuals of these cryptid cats on an almost weekly basis. The reports below are the presented exactly as they were sent to me. The only items withheld are the names of the submitting witnesses.

These reports should generate renewed interest as they come on the heels of the Fox News report out of Montgomery County earlier this week that detailed attacks on horses by some sort of big cat.

“Had a few sightings at our ranch in Washington County a few months ago. Our neighbor says it was a large feral domestic cat. To me it seemed to be too large and too fast. Was only about 2.5 feet long but jet black with long tail. Seemed, to me, that it might have been a juvenile larger cat? There has been quite a bit of talk in the area of larger black cat sightings and the local HS mascot is actually named The Panthers. Old-timers in the region call them "swamp cats" cause they say you used to be able to find the around the creek beds.”

TCH Comment: While it is possible the witness spotted a juvenile cat, I can’t dismiss the possibility of a large domestic/feral cat in this instance. They can get quite large as the photo below of a feral cat shot in Australia shows. Having said that, I believe people, especially those who’ve had a good long look or multiple sightings, know a domestic/feral cat when they see one. A jaguarundi in dark-phase must also be considered for this sighting. One last thing to keep in mind is that Washington County sits just South and East of Montgomery County where there have been some very interesting “black panther” related events (see link above). 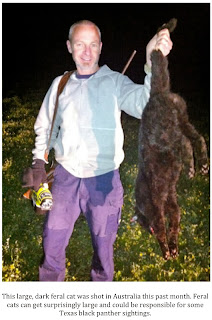 “The ones I've seen are a very dark shade of brown and it could be described as a charcoal brown color, the cats were seen and heard twice in 2011 and many more times in 2012 just North Cooper Lake, all the ones I've seen was while I was in my tree stand just before dusk or just after the sun set, I'm always in full scent free camo gear and its during deer season.

I've only told a few people about it and I don't think they really believe me, all I can say to the non-believers is, if you only knew how real the danger is, you wouldn't be going in any woods in Texas without a gun in hand.

TCH Comment: The witness did not mention the size of the cat(s) he has seen but if the cats were not huge a jaguarundi must be considered as a possible suspect. These cats are most often a rusty reddish-brown color but the charcoal color is not uncommon. Mountain lions can also be an almost charcoal color as seen in the photo below of a cougar taken in far West Texas. 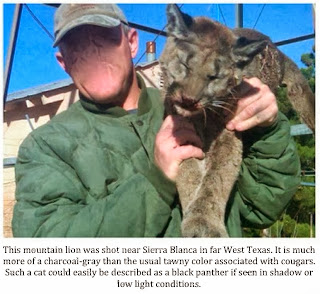 “I saw a large black cat run across Alamo Parkway in San Antonio on Saturday, August 23rd. It ran across the road in front of my car about 100 feet in front of us.”

TCH Comment: Few details here but be careful about dismissing a report that comes from within a large city like San Antonio. Alamo Parkway is located on the far West side of San Antonio outside of Loop 1604 and not far from the Government Canyon State Natural Area. The area West of San Antonio is sparsely populated and remains pretty wild so a large cat of some kind venturing in from this area is not far-fetched at all.

“I lived in San Felipe, Texas a quarter mile from Stephen F. Austin State Park and the Brazos River from 1998-2007. Spotted large black spotted cats on several occasions when we camped on the river bottom. Once we watched a female with two kittens walking the bank across the river from us in broad daylight for several minutes with five witnesses. Stunned us all, the general consensus was it was a jaguar.”

TCH Comments: Reports of large black cats have been common up and down the Brazos River for decades. The area near San Felipe is not heavily populated and the river could provide a travel corridor for a large predator. Another interesting fact is the proximity of the sighting to the Attwater Prairie Chicken National Wildlife Refuge. I think the description of “black spotted cats” is interesting. If this description is accurate, I can see why the witnesses believe they saw a jaguar.

“Northeast Texas, Fannin County. This area known as "The Wildcat Thicket" and also for Sam Rayburn home in Bonham and the Lee - Peacock fights near Trenton, TX. We have seen this black cat with a tail as long as its body on Sept. 25th at 10pm and about a year ago. We also see bobcats, which have longer legs and a different walk.”

TCH Comment: Another report without a whole lot of detail but the witness does clearly differentiate between the black long-tailed cat he saw and the more common bobcats that make the area their home. The area North of Dallas-Fort Worth up to the Red River is an area that has become a real hot spot for sightings of large black cats.

“I know all of these sightings are mostly in Texas, Arizona and New Mexico. However, I live on the Oregon coast and have been seeing what sounds to be the same type of cat. The cat i have seen is about 100 to 120 pounds, i reference this by comparing to our golden lab at about 80 pounds and the cat was considerably larger. The tail was at least 3 feet long and this thing is all black. I first saw it at about 100 yards in the timber and first thought was it was a bear. Then i got a better look at it and knew it was no bear, i grabbed some binoculars and got it in my view just as it disappeared in the trees and all i could see was mid body back. My wife seen it also but without the binoculars. We have been trying to research what it was and everybody tells us large black cats don't exist in Oregon. Well, my wife's folks are visiting us from Washington and we were telling them what we had seen from our back deck and they were receptive but skeptical, until she saw it at about 75 yards on Friday and now she believes us. Her description was at least 5 feet long with a 3 foot long tail and large head and all black. We have a camera set up just waiting to get a photo. Anybody have any ideas?”

TCH Comment: I’ve included this report even though it originates far outside of the region in which I live. I think it is important to show that black panthers are not solely a “southern thing.” I appreciate this witness taking the time to share his experience. Please let me know if those cameras catch anything. 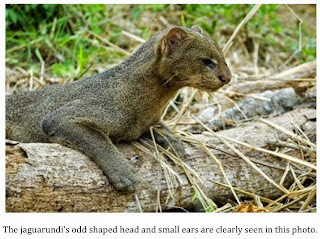 “I'm not sure if there is the right place to post a sighting, but this is what I saw.... On September 26, 2013, approx. 6PM, I was almost at a complete stop in my truck as I was going to turn into my property in Bishop, Texas, I noticed something dark moving slowly in the field right across from my location. The field is used to grow corn and cotton( but it has been cleaned for awhile now). The large black panther looking animal, approx. 3 1/2 feet long and about 18" in hieght, continued to walk across the street, right in front of me while I was in my truck, and he came into my property. I say he because the face was very masculine with a flat box top of head, it was not curved from ear to ear, his head was flat, the ears were short/little and pointy, his fur was full/thick, and tail was long and thick from end to end as the width was too. He was black, black, no spots or dark brown. He did not resemble a bobcat. He looked in my direction as he crossed in front of my truck and it appeared his eyes were light in color.

I have 2 dogs, 1 Great Pyrenees and a 1 Catahoula. They were barking and running from one end of the 5 acres I have to the other. The next morning, I had a hen missing and feathers were scattered. What exactly is what I saw??”

TCH Comment: The descriptors the witness uses include a “flat head,” a “dark” color, “small pointy ears,” and an animal “approximately 3.5 feet long and 18 inches high.” This is a classic description of a jaguarundi. The witness also states that the sighting took place near Bishop which is located in deep South Texas very close to the very limited accepted range of the jaguarundi. I’m guessing that is exactly what this lady saw.
Posted by Mike at 11:55 AM