Below is a photo allegedly taken by a game camera near Kosse, TX. 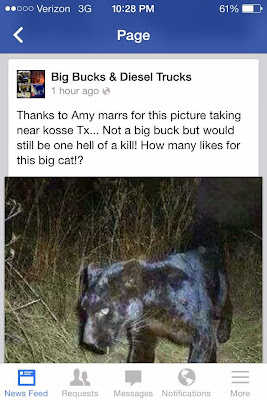 Unlike many photos that are purported to show black panthers, this one is undeniably a big cat. It is clearly very large and you can see the spots despite the black coat. IF this shot really was captured in Texas then it is a game changer. The photo was brought to my attention by a Facebook follower who came across it on another Facebook page called Big Bucks & Diesel Trucks.

What is interesting about it is how matter-of-factly the photo was received by the site administrator who said, and I’m paraphrasing, “Not a big buck but this would be a hell of a kill.” No amazement that a “black panther” was photographed. No accusations that this could not have possibly been taken in Texas (though at least one commenter did make that statement). It was the type of response that I would expect from a rural Texan who actually lives and spends time in the outdoors.

I left a message on the site asking the person who uploaded the photo to contact me but have not heard from her yet. Keep your fingers crossed that she does and that I can get down there in the near future to investigate.

The photo is clearly genuine. There is no doubt what it shows. What we do NOT know with certainty is where the picture was taken. If there is anyone out there that knows the story on this photo, please contact me at Texascryptidhunter@yahoo.com.