Anyone who has read this blog for very long knows of my interest in the cryptid black panthers that many are convinced roam the more remote areas of Texas and the Deep South. I know that there is not supposed to be any such animal. I know that the term black panther is generally considered to be a misnomer and that the only large melanistic cats out there are the leopards of Africa and the jaguars of Central and South America. I know that no melanistic cougars have ever been documented in captivity or the wild. I know all of this.

Yet, the sightings continue to pour in…

I’ve never seen a black panther myself but I know several people who say they have. I would trust these men with my life and believe their stories. I have met and interviewed many others who have had sightings of what can only be described as black panthers. I have no reason to doubt their accounts and detected no signs of deception from them. I’ve also seen a handful of very intriguing photos that, while not conclusive, seem to suggest that a large black cat of some sort just might be out there. I want to prove once and for all that these cats are out there. I want them documented and recognized by science. More than anything, I want to know what they are. New species? North American jaguar? What?

I have been holding onto and publishing the accounts of people who claim to have had encounters with these cryptid cats for several years now. I thought the accounts were fascinating and would make interesting reading for my followers but also hoped that some kind of pattern would become apparent as I studied them. Maybe some common denominator would appear that would help me zero in on where the best place to find one of these animals might be. I wanted to create a distribution map showing the location of each sighting. Only recently did I come to the point where I felt I had enough credible sighting reports to begin the process of creating such a map. I have plotted the location of right at one hundred sightings of large, black, long-tailed cats in the Lone Star State. I’ve included a handful of reports out of Oklahoma that have been sent to me as well. I have received sighting reports from other regions of the country and have published them in various blog posts but they are not included on this particular map. My black panther distribution map is below. The map shows the major rivers of Texas by name. Major cities are denoted by black dots. Sightings of large, black, long-tailed cats are denoted by red dots. 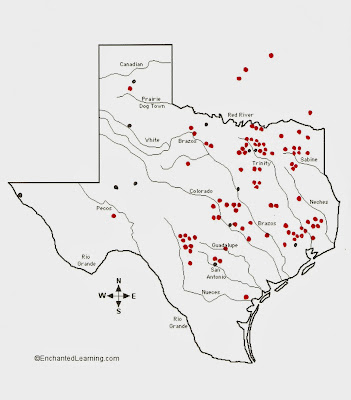 Have any patterns emerged as a result of my effort? Maybe. It appears that there are three definite hot spots for black panther sightings. They are the North Texas area surrounding the D-FW Metroplex, the Texas Hill Country and the Big Thicket/Piney Woods area of Southeast Texas. Central Texas has a high concentration of sightings as well but they are not in quite as tightly packed as the reports coming out of these other three regions. There is also a nice concentration of sightings in Northeast Texas.

Major rivers seem to play an important role in these sighting reports, particularly the areas where the rivers originate. For example, the Hill Country sightings are packed tightly within an area sandwiched between the headwaters of the Nueces, San Antonio, and Guadalupe Rivers. The Trinity River is a major player, too, with sightings concentrated at its beginning point (North Texas) and ending point (Southeast Texas). Secondary hot spots share this characteristic as well. Take the mini-flap of sightings just south of Wichita Falls near the point where the Brazos really begins to take shape and the small concentration of sightings in Northeast Texas near the headwaters of the Sabine and Neches Rivers. One seeming exception to the “headwaters” pattern is in Central Texas. The sightings here are concentrated in the region where the Brazos and Colorado Rivers begin to flow pretty close to one another but are already well established. Smaller rivers like the Leon, Little River, and Lampasas, however, do originate in this area so maybe it isn’t an exception after all. Southeast Texas, though, would definitely be an exception. This is the area where rivers culminate. The Sabine, Neches and Trinity all dump into the Gulf of Mexico near this area. The area does share many similarities with the headwaters areas mentioned above as large numbers of creeks, bayous and marshes cut through the region. These areas are inhospitable to humans but rich in resources for wildlife.

The fact that the sightings are concentrated near and along rivers is certainly no surprise. The waterways are natural corridors that wildlife uses to travel from one area to another. Even rivers that flow through major metropolitan areas, like the Trinity, are often surrounded by greenbelts a mile or more in width. These greenbelts certainly would not sustain a large predator for any real length of time but would provide more than adequate food resources and hiding places for transient cats as they moved through a highly populated area.

What is a bit eye opening to me is how the sightings are bunched up near the headwaters of rivers. I have no real explanation for this. Are these areas somehow richer than other areas along the path of these rivers? Maybe. Certainly the concentration of springs, creeks and small streams in these areas would make for a rich environment. Add the fact that many of the areas where our major rivers originate are still fairly remote and we might be on to something.

Please keep sending in your reports of black panther sightings. Encourage any friends you know that have seen these cats to do the same. The more credible sightings I can plot on the map the better.

Maybe we really can begin to zero in on the mysterious black panthers of Texas.