Jaguarundi Photographed in the American South?

I received an interesting photo from a reader this past week. The reader had very little information about the picture but said he thought it had come from a game camera in Mississippi or Missouri. If true, then we may very well have photographic proof that the jaguarundi has spread much farther North and East than anyone ever would have suspected (including me). 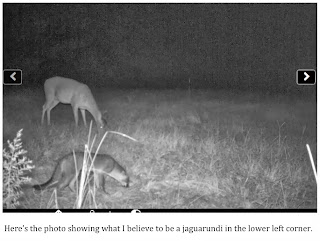 The jaguarundi (Puma yagouaroundi) is a relative of the cougar but much smaller. It averages between 30 and 45 inches long and can be dark in color though, it is thought, not black. According to the Mammals of Texas – Online Edition, “Jaguarundis live in the brush country of extreme south Texas in Cameron, Hidalgo, Starr, and Willacy counties – where it is rare.” They are not even supposed to get as far as East Texas much less Missouri or Mississippi. IF this photo does originate from either of these two states then it is an important discovery.

There is little doubt in my mind that the photo shows a jaguarundi. Compare the game camera photo to the picture of a jaguarundi in dark phase below and I think you’ll come to the same conclusion. The flat head, long body, small ears, thick long tail and overall weasel-like appearance are present in both photos. The cat in the game camera photo appears lighter, which would be more common than a darker specimen, but that is about the only difference I see. 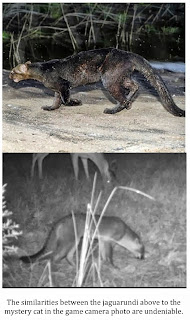 I see nothing in the photo that would lead me to believe it is a fake of some kind. The only thing that I cannot be sure of is WHERE the photo was actually taken. I have no reason to doubt the story of the reader who sent me the photo. He readily admitted that it had not been his game camera that captured the photo. He stated that he had seen the picture on some sort of hunting forum and thought he remembered reading that it had been snapped in Mississippi or Missouri. If the jaguarundi has spread this far North and East then the species is doing far better than wildlife biologists believe. It would also prove that they are among the most elusive of North American mammals to have moved so far without detection. 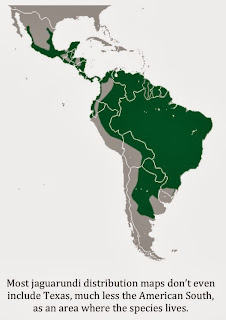 If this photo does turn out to have come from Missouri or Mississippi then it could validate at least some of the “black panther” sightings so often reported in Texas and the Deep South. As you can see from the photo of the jaguarundi in dark-phase above, it wouldn’t be too hard to mistake one of these cats for a panther. They are larger than domestic/feral cats with long, thick tails. A quick glimpse of a dark jaguarundi crossing a road could fool almost anyone.

If there is anyone out there who knows the complete story behind this photo please contact me.
Posted by Mike at 8:53 PM