I just finished looking into an old sasquatch sighting that allegedly occurred in the summer of 1973 in Tyler County, Texas. Below is the account of the witness and my report on the incident:


Witness Observation
It was about 8:15 on a Tuesday evening, late July. Location was the end of Tile Plant Road about 1.5 miles southeast of Woodville, TX. I had slowed to cross a cattle guard and noticed what I thought was a person squatted on the bank of a small creek that runs through a friend's pasture. I stopped and it stood and headed across the pasture in my direction. I had not yet concluded this to be anything other than a trespassing fisherman, but when it covered the 100 yards from creek bank to fence in a very short time, I began to wonder. Wonder turned to astonishment as this critter (without breaking stride) cleared the 5 foot fence and 8 foot gap between fence and road landing in one step. Astonishment turned to terror when this thing stopped and faced me. Tall and heavy built, it was the largest two legged animal I'd seen outside a movie theater. Hair covered its body and most of the face with the head hair long (hanging passed the shoulders) and the face hair looking like a long beard. I was 10-12 feet from it and while the sun was low, I had not yet needed my head lights, so I was seeing him in somewhat dim light. This was not ape looking except for the hair and large long arms. I don't know what I saw, but it wasn't a man or an ape, and with that, I dumped the clutch and hauled it home.

Investigator's Comments
Michael C. Mayes
This investigation was conducted as a result of an incident that allegedly occurred in July of 1973 in Tyler County, Texas just outside of Woodville. 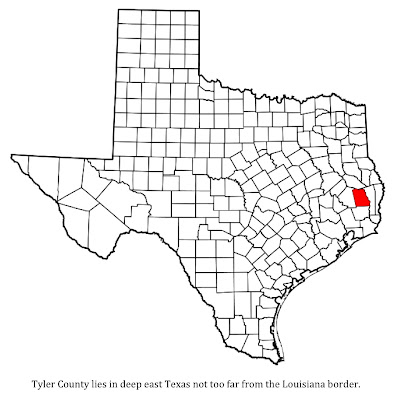 The witness, 17 years old at the time of the incident, had just dropped a friend off at his home at the end of Tile Plant Road (CR 4250) following a church youth function and was traveling north back toward FM 1746. He slowed his truck down to cross over a cattle guard installed at the boundary of the property owned by his friend’s family and, as he did so, happened to notice what he thought was a person squatting on the bank of a small creek which runs across the property. The witness brought his truck to a stop to take a better look. After he did so, the figure stood up and began walking quickly toward the road and his truck. The witness said he initially thought he was looking at a large African American man wearing a large coat. He wondered briefly why anyone would be wearing a big coat in July, but this train of thought quickly passed altogether when he realized just how big the approaching subject was.

The subject covered the approximately 100 yards between the spot on the creek where it was first observed and the fence line in a surprisingly short amount of time. The witness described the locomotion as a “gangly gait” but very smooth. He said it was hard to describe the movement. It was not a run, but more than a leisurely walk. The witness said the subject did not appear fearful, but acted as if it needed to get to the woods on the opposite side of the road. The witness was shocked when the subject cleared a three and one-half-foot barbed wire fence and stepped into the road about twelve to fifteen feet in front of him in, seemingly, one smooth movement. The witness said, “There must have been a bit of a leap in there somewhere,” as the fence was high and the road was elevated five to six feet higher than the level of the pasture (“turtle-backed” roads like this are very common in Southeast Texas due to the fifty to sixty inches of annual rainfall the region receives). The witness went on to say, “If he jumped I didn’t notice it. It all happened so quickly and it was just an effortless movement.” 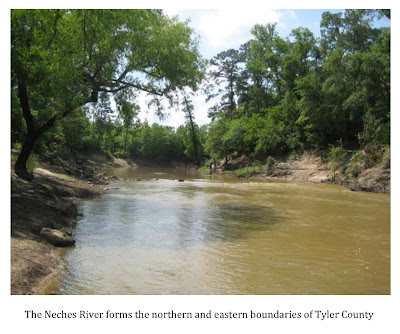 The subject paused briefly in front of the truck of the witness and turned to look in his direction. The witness said the legs of the subject remained in profile while the entire upper half of its body pivoted his way. The witness said the subject paused for three to five seconds and was very close, allowing him a very good look. He described a massive creature that stood in excess of seven feet in height (this estimate was based on the fact that the subject towered over his 1963 Ford pick-up), was easily two and one-half to three times as wide as a normal man, and covered in very dark brown or black hair. The hair on the body was, as far as the witness recalls, a little more than one inch in length. The hair on the back of the head, shoulders, and upper back seemed to be a bit longer. The witness stressed the hair was not “mane-like” but definitely longer than the hair on the rest of the body. There was no hair from “eyes to mouth,” but it did grow down the sides of the head and under the mouth in a bit of a beard. The witness estimated the hair on the face was about the same length as the hair on the body.

The witness said the skin on the face was dark and the skin seemed very “thick and weathered.” He said the appearance of the skin was not like that of “tanned leather,” but more like someone who had been out in the sun for years. The witness struggled to further explain the appearance of the skin, stating that it was not “smooth and shiny like that of a gorilla but more textured.” At this point in the interview, the witness stressed that the face was not ape-like. He stopped short of saying the subject looked human, but could not really add more detail than it definitely didn’t look like an ape.

The witness was not able to give much detail about the body of the subject as his gaze was locked on the creature’s face. He did recall noticing pectoral muscles leading him to believe the hair on the chest area must have been thinner than on the rest of the body. He does not recall seeing any genitalia. He said the shoulders seemed wider than the hips but could not be sure due to the angle from which he was viewing the subject. The arms were very long but the witness felt they were “proportionate.” Toward the end of the encounter, as the subject walked into the forest, the witness said he noticed very thick and well-developed gluteal musculature. 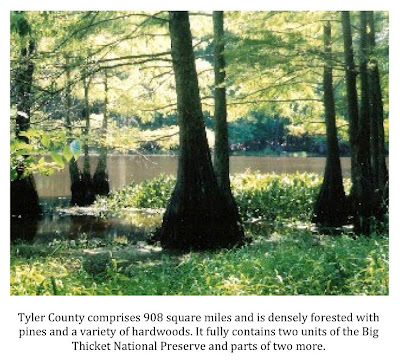 After three to five seconds, the subject proceeded across the road and into the woods. The witness said he “popped the clutch” and got down the road as quickly as he could. He said that he shared the details of his encounter with his father, but his story was met with laughter. After that, the witness did not discuss the encounter further with anyone for many years. He never mentioned the incident to his friend, whom he had just dropped off, or his friend’s family. He has only recently told a few people about the strange encounter he had as a 17 year-old youth. He continues to be met with derision and ridicule; however, he no longer really cares what others think. He is confident in what he saw and that is why he decided to file a report with the TBRC.

I interviewed this witness at length and found no reason to suspect deception or misidentification. As part of my overall analysis of the interview and the reported information, it is necessary to concede that there is no empirical evidence that would support the witness’s claim; the date of the event alone would preclude the hope of any sort of corroboration, physical, circumstantial, or anecdotal. Moreover, I have taken into account the very real possibility that the witness’s memory could have, over time, both diminished and embellished certain facts, unintentionally or not. Having said that, in my judgment, the witness shared—in a straightforward and honest manner—his recollection of something he could not explain. It is my assessment that this gentleman no doubt believes that he had an extremely rare and up-close encounter with something matching the classic description of a sasquatch.

See this and other bigfoot reports at the TBRC website.
Posted by Mike at 5:33 PM