I thought I would update the story of the mysterious predator that has been preying on livestock in rural Bell County.

According to a story by Anthony Scott in the March 3 edition of the Killeen Daily Herald, people are backing away from the whole “mystery animal” label. Rancher Jim Bob Fisher, who has lost about $3,000 in goats to the predator, says what he saw was a coyote.

“I don’t want anyone to think this is different from anyone else’s problem, “ Fisher said. “Someone has claimed it is a wolf or something but I don’t know why.” 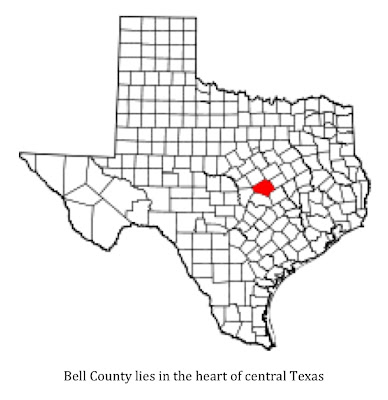 While I agree with Mr. Fisher in that the animal in question is most likely a coyote, I think I do know why people are whispering wolf. It has to do with the descriptions Fisher, and others who claim to have seen the animal, have given regarding its size. Even in the March 3 article Fisher, while denying the canine was a wolf, talked about the exceptional size of the coyote he has seen.

“It’s a very large coyote we’ve seen or a coyote-cross,” he said. “There have been coyotes crossed with dogs in this part of the world since forever.”

“I saw a coyote,” Commissioner Fisher said. “I didn’t see a chupacabra or whatever it’s called. They pumped it up like there’s this mysterious animal.”

Both father and son blame the media for over-hyping the situation. The pair took particular exception to a local television news channel for their report on the story, which included the line “mystery animal ravaging Bell County livestock.”

Bell County Game Warden Billy Champlin doesn’t think anything too unusual is going on. The end of winter and early spring are the times of year when goats and coyotes have their young. Coyotes are going to have to work overtime to feed their pups. Goats, particularly young ones, make attractive targets. While Champlin doesn’t think anything odd is occurring in Bell County he does leave open the possibility than an animal other than a coyote is responsible for the predation. 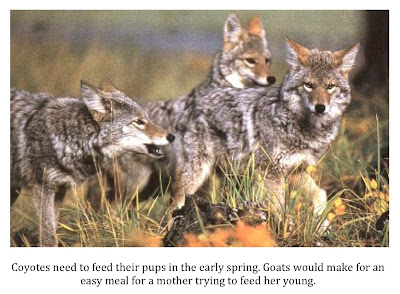 “It’s quite possible, whether it’s coyotes or mountain lions; it’s hard to know without investigating. Either one, we have them all. We have mountain lions, coyotes, and bobcats. They’re wild animals and they get hungry,” he said.

As I noted in my original post on this story, I believe a coyote or coyotes, are the most likely culprit(s). I think the lack of any official investigation by the Texas Parks & Wildlife is a sure sign that the story has been overblown. I do think it is possible a big cat could be responsible for the killings but until one is seen, a track is found, a photo is snapped, or something larger than goats are taken, coyotes remain number one on the suspect list. 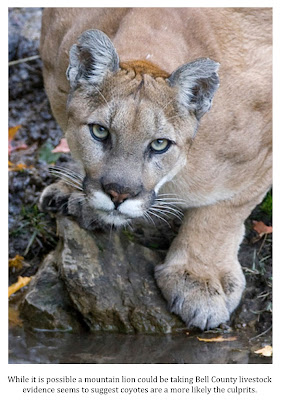 Some will be disappointed that there is likely nothing more mysterious than coyotes stalking small livestock in Bell County. I would disagree. I think the entire situation is a fascinating peek into the delicate dance that is going on between humans and the wild things that are left in our world. While the ranchers who are losing money due to predation would likely disagree, I am glad to know that some of the predators that were once so common in this part of the world remain.
Posted by Mike at 12:44 PM