According to a story published by the Associated Press, a 70 lb. mountain lion was captured in the backyard of a Tulsa Oklahoma home this past Saturday. Tulsa is the 47th largest city in the United States and has a population of nearly 392,000 according to the 2010 census. This is not exactly the sort of place that is usually considered panther territory. 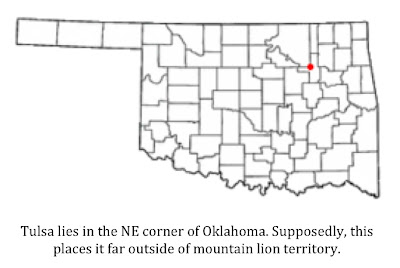 Tulsa police, Tulsa Animal Control, officials from the Tulsa Zoo, and Oklahoma Department of Wildlife Conservation responded to a phone call from Luke Roberts, a homeowner in north Tulsa. It seems that Roberts came out of his house and spotted the big cat lounging on a limb about 20 feet up in a tree around noon.

Officials were able to tranquilize the mountain lion (Puma concolor) and capture it. It did get interesting briefly as the lion, after being hit with the dart, leapt out of the tree and ran through several backyards in the neighborhood before finally succumbing to the effects of the tranquilizer and losing conciousness. 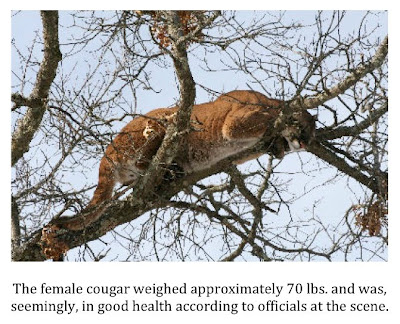 Veterinarian Kay Backues told the AP that the lion had no apparent injuries and will be taken to the Tulsa Zoo until a permanent home for it can be located. 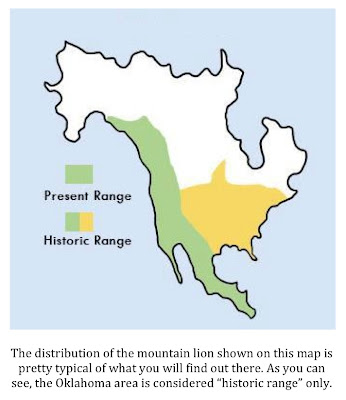 Nearly all charts showing mountain lion distribution in North America leave Oklahoma out of the equation all together. At best, the charts show Oklahoma as part of the “former range” of these big cats. Oklahoma Department of Wildlife Officials did concede that these big cats, while rare, do live in Oklahoma. It was quickly added that they tend to be found in the southern and western parts of the state, however, which makes the find of a cougar anywhere close to Tulsa a rare event. 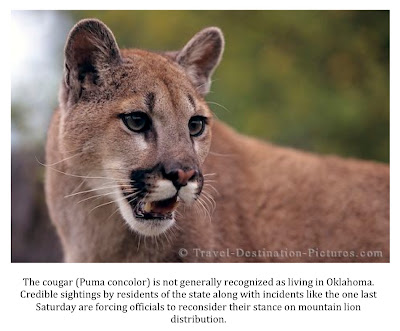 I am hoping that officials will see fit to relocate this big cat. According to reports it was a healthy female. Breeding females are worth their weights in gold for rare species. I would be saddened if this lion was kept in the Tulsa Zoo for the rest of its life. I am pleased that, unlike the serval found roaming about League City, Texas last week, this cat was not put down. It seems the authorities in Tulsa were better prepared for this sort of thing than the folks in Galveston County, Texas. I wonder why?

It is my opinion that big cat populations are increasing. The deer population in the south is healthier than ever while the numbers of feral hogs in the region have absolutely exploded. The prey base is there for these animals. The fact that deer and hogs can both be found near large metropolitan areas leads me to believe that incidents like this could become more common.

If so, I’m afraid most incidents won’t end as well as this one.

You can read the original story here and see a short video from Oklahoma television station KOCO regarding the capture of this cat here.
Posted by Mike at 9:07 PM