According to a story by Scott Gordon on the Ultimate Clear Lake website, a serval was shot and killed by League City Police on Tuesday April 12. You can access the story here.

The serval (Leptailurus serval) is a medium-sized African wild cat that typically stands 24-26 inches high at the shoulder and weighs in at 20-40 pounds. The serval is a strikingly beautiful cat with black spots in varying patterns on a tawny coat. These cats also have 2-4 black stripes running from the head down the back. The serval is quite common in sub-Saharan Africa. Melanistic individuals are not uncommon in some regions and white servals have been documented in captivity though never seen in the wild. 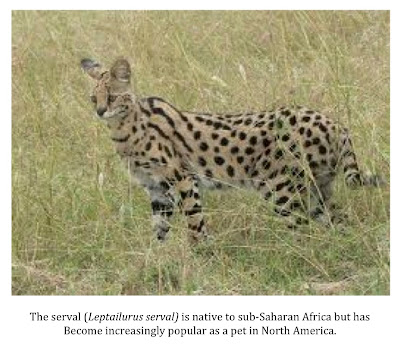 The exotic cat was first seen by workers at a daycare located in the 3500 block of West Main Street at approximately 4:30 p.m. Both police and animal control officers were called by the daycare workers; however, by the time the officials arrived the serval had left the grounds. The officers did locate the cat quickly thereafter in the back yard of a home located behind the daycare center. Officers decided to shoot the cat at that point. League City Police spokesperson Sgt. John Jordan issued the following statement:

“Animal control didn’t have the means to capture the animal so officers had to shoot and kill it. It was an almost 50-pound cat and obviously had fangs and what have you. They weren’t going to let it go near a daycare but, as far as trying to attack somebody, no, it did not do that. Supposedly the animals are very territorial.”

Animal control officers later found an embedded microchip in the animal which identified the cat as belonging to a Galveston County resident. How the serval escaped and how long it was on the loose were not discussed in the article.

Sgt. Jordan is quoted as saying, “It is not legal to keep a serval as a pet in League City, but, in Galveston County, you can get a permit, from what I’ve been told.”

Some question the weight of 50-pounds noted by Sgt. Jordan as this is quite a bit heavier than one would expect in a wild serval. I do want to point out this was not a wild serval but a pet. It is not unusual for exotics kept as pets to be heavier than their wild cousins. They simply don’t have to work as hard for their food. I see no reason to criticize the police spokesman for this particular detail. 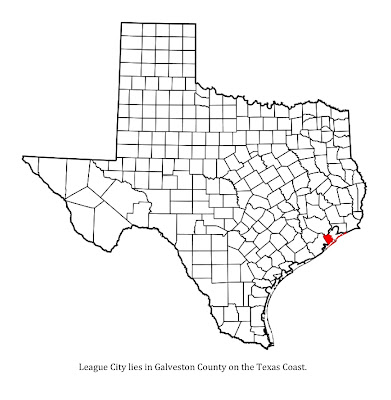 It is true that Sgt. Jordan and the League City police don’t come off particularly well in this story but I don’t want to be too hard on them. To be fair, it would not be realistic for a policeman in League City, Texas to be familiar with the serval or to be able to make an accurate call on just how dangerous the cat might be. To some degree the authorities were placed in a no-win situation. They are not equipped to capture an exotic cat. Remember, too, that the serval had been seen on the grounds of a daycare center and was found adjacent to it. Imagine the outcry had the police attempted a capture, failed in their efforts, and then some young child was injured the next day or week. No, the outcome, unsavory as it was, was not the fault of the authorities in this case.

I choose to place the bulk of the blame on the owner of cat. This person failed miserably in their duty to keep their pet and the public safe. If you are going to take on the burden of raising exotic big cats then you darn well better have the facilities, supervision, and, most important of all, the will to make sure they don’t get out. The responsibility for this incident falls totally on the shoulders of the owner, in my opinion.

I’m afraid this could become a more common occurrence. Servals are being bred with domestic cats to form a hybrid breed of domestic called the Savannah cat. The Savannah cat is smaller than the serval but retains the brilliant striping and spotting of its exotic parent. The breed has become increasingly popular so the demand for servals for breeding purposes has sky-rocketed. 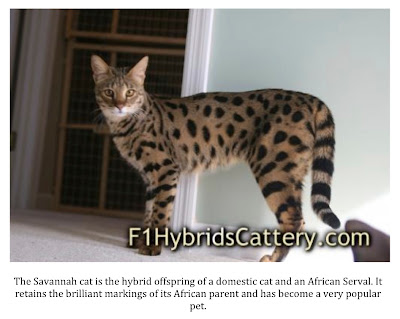 Hopefully, owners of these exotic cats will take heed due to what happened to this unfortunate specimen and, if they haven’t already, take every precaution to make sure the same fate doesn’t await their cats.

*My thanks to my friend Angelo Landrum for the heads up on this story.
Posted by Mike at 5:01 PM