A remarkable set of photos has been circulating showing eight mountain lions in one location. Various rumors concerning the photos have begun to pop up as well. I thought it might be a good time to address some of these rumors and, to the best of my ability and knowledge, set things straight concerning these remarkable photographs.

First, let’s address exactly where the photos were taken. There is a growing rumor that the shots were taken near Brady, Texas. I have seen this stated on several hunting forums. Multiple readers have emailed in who have heard this rumor and asked why I have not addressed this remarkable gathering of cougars since it took place in the Lone Star State. The answer is pretty simple. The photos were not taken in Texas. I was aware of the photos but, with exceptions here and there, tend to keep my eye on more regional things. The pictures were actually taken on a Douglas County ranch in Washington state. You can access an article about the photos on the Field & Stream website here. 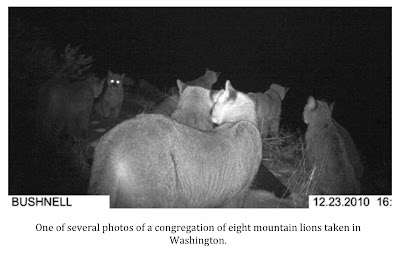 Another rumor I’ve heard is that the photos are fake or they are pictures of captive cougars at a big cat rescue center. From everything I’ve been able to dig up neither of these rumors is true. The photos are genuine. The photos were taken by a game camera placed on a trail by a gentleman named “Brad” whom, for whatever reason, wants his last name to be withheld. Normally, this sort of behavior would raise a red flag with me but multiple sources confirm he is who he claims to be. The Field & Stream article also quotes Washington Fish and Wildlife Department biologist Jon Gallie who said, “It is a magnificent one time observation; not unheard of, but it’s very rare.” He would add, “Cougars are notoriously territorial. Seeing eight in one spot is a wildlife jackpot.”

Something else I’ve read is that if the photos are real it must signal some sort of explosion in the mountain lion population that could lead to the decimation of the deer population in Washington. This is simply not true. As the wildlife biologist quoted above said, this congregation is unusual but not unheard of. It is true that cougars tend to be solitary animals. They do not live in prides like African lions do; however, cubs stay with their mothers for up to two years. While female lions are fiercely protective of their young and are willing to fight off much larger animals to protect them, they do tend to be more tolerant of other females with young. Cubs nearing maturity look very much like adults in size and color. I think what is going on in the photos is that two mature females with several almost mature cubs met up in a spot that just happened to have a trail camera watching over it. There is likely nothing more to it than that. 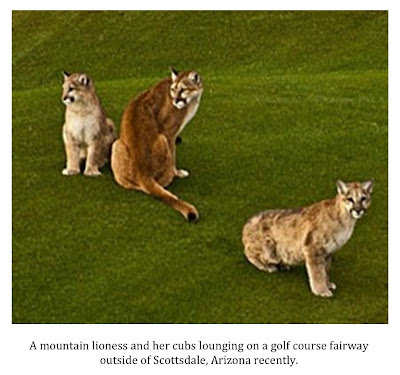 Coincidentally, another incident of multiple cougars congregating recently took place in Arizona. A photo of these big cats clearly shows a mother with two cubs nearing maturity. The cats were photographed as they lounged about on the fairway of the par-5 4th hole of the Desert Mountain Golf Club’s Cochise Course in Scottsdale. The mother is clearly identifiable by her dark solid honey-colored coat. The two cubs are slightly smaller and still exhibit some signs of the spots common to young cubs (view a gallery of these cats here). I would be willing to bet the same sort of markings would have been visible on at least some of the big cats photographed in Washington if the image had been in color.

The images captured in Washington are remarkable and the owner of the camera that captured them must be thrilled with his good fortune. My hope is that one of my cameras will capture something equally remarkable, if not more so, one day soon.
Posted by Mike at 4:01 PM