According to a post by an administrator on the Texas Fish & Game forum, a wolf has been killed in Missouri. Read the post here.

Last December a report came out of Missouri that a huge coyote weighing in excess of 100 lbs. was shot and killed in Carroll County. This just did not seem possible to many as coyotes (Canis latrans) typically weigh 25-40 lbs. The Missouri Department of Conservation (MDC) questioned this identification as well and ordered DNA testing.

At first, the MDC was looking for evidence that a coyote had interbred with a domestic dog. Initial test results, however, identified the animal as a coyote. The MDC was not satisfied with this result and dug a bit deeper. Officials began comparing the DNA of the subject to that of similar species from other regions of the country. Despite the fact that wolves have long been thought extirpated from Missouri, scientists took the extra step of comparing the DNA from the huge Carroll County canine to that of wolves.

Officials first compared their sample to that of western gray, or timber, wolves (Canis lupus). The results did not show enough similarities for officials to comfortably label their mystery canine a wolf; however, they found a very close match when a sample was compared to DNA taken from wolves in Michigan. 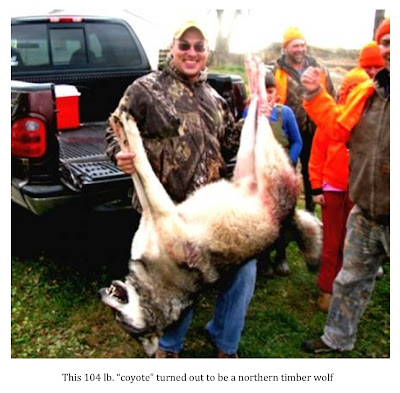 “Lots of people were skeptical when we announced results from the first round of testing,” said MDC Resource Scientist Jeff Beringer. “We were too. But when you are trying to unravel a biological puzzle like this one, you take things one step at a time and go where the science leads you. This animal appeared to be very different from the western wolf samples it was compared with, but when we compared it with wolf DNA from the Great Lake states we found a match."

With the match made the MDC has labeled the 104 lb. canine a wolf. Not a coyote hybrid. A timber wolf. So, how does a timber wolf from the Great Lakes area travel more than 600 miles and find itself in Missouri?

Well, it turns out that this is not the first time it has happened. According to Beringer, an 80 lb. timber wolf was shot back in 2001 by a landowner in Grundy County. The landowner thought he was shooting at a coyote but quickly realized his mistake when he found a radio collar and an ear tag on the animal. He reported the incident to the MDC and they found the tag linked the wolf to a population in the Upper Peninsula of Michigan.

Reports of large wolf-like canines, too large to be coyotes, come in from time to time from many areas where they are no longer supposed to exist. Many have reported seeing wolves here in Texas. I have heard several tales of wolves spotted in the Big Thicket of SE Texas. I’m not talking about the smaller and more slightly built red wolf (Canis rufus) that was common at one time in Texas either. I am talking about wolves well in excess of 100 lbs. Timber wolves.

Maybe the lesson we should take from this incident in Missouri is not to be too quick to dismiss such reports.
Posted by Mike at 9:42 PM

Email ThisBlogThis!Share to TwitterShare to FacebookShare to Pinterest
Labels: Coyotes/Wolves, News Items, Out Of Place Animals