Bill Warren, the gentleman who purchased what may be the pelt of the ostensibly extinct thylacine (Thylacinus cynocephalus) has sent a brief response to the article, written by TBRC Chairman Alton Higgins, entitled "California Thylacine?" and posted here on this site back on November 22, 2010. 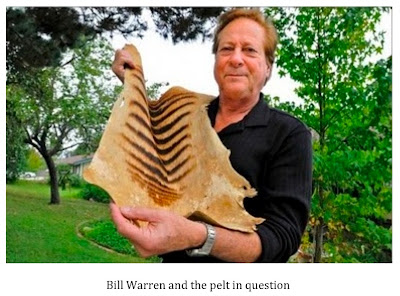 You can access the article here or just hit the "guest blogger" label in the right margin to review the original post. In the article, Higgins posits that the pelt Mr. Warren has purchased is actually that of a zebra duiker (Cephalophus zebra), a small (9-20 kg) antelope that lives in the dense forests of West Africa. The zebra duiker is a spectacularly colored and marked animal and is listed as endangered. Alton did a very nice job of comparing the available photos of Mr. Warren's pelt to those of photos of zebra duikers as well as to known photos of thylacines. 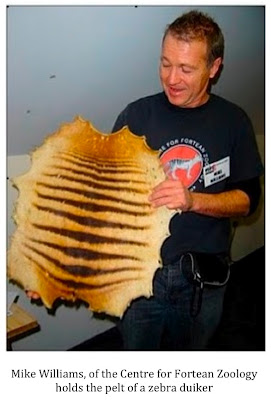 Higgins, while not completely ruling out that the pelt is thylacine in origin, came to the conclusion that the skin is most likely that of the zebra duiker. He wasn't alone in reaching that conclusion. A gentleman identifying himself as a Col. Bailey from Tasmania wrote in and said, "You are so right. This is indeed the pelt of the Zebra duiker from Sierre Leone. The striking similarity to the thylacine pelt has previously lead many astray." This Col. Bailey claimed to have been involved in the analysis of the Emmerich photos, alleged to be of a thylacine, as well. To be fair, I have no idea if this gentleman is who he claims to be as this message was left as a comment to the original article. So take it for what it is.

A gentleman identifying himself as Bill Warren left the following comment today: "I am Bill Warren and I have written reports from various experts on the Tasmanian tiger and they agree my skin is a Tasmanian Tiger. The stripes on my skin are shorter than a duiker. My skin is much longer. My skin is soft when you run your hand against the grain." Again, to be consistent, I have no idea if this is in fact the real Bill Warren. I have reason to doubt it is not either so, again, take it for what it is. I replied, as you can see in the comments section below the original post, that I hope he is right and the pelt is that of a thylacine. I did ask if he had made the skin available for DNA testing and if any museums or universities had stepped up to help make this happen. 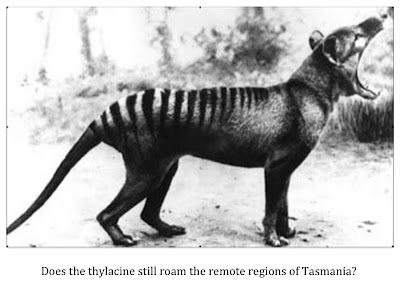 Mr. Warren, if you are reading this, I would like to say again that I, and I think I can safely speak for Alton Higgins as well, hope you did find the skin of a thylacine. It would be a spectacular find. The points you mention about the pelt being larger than a duiker, the stripes being shorter than those of a duiker, and the texture being different could all be valid but, obviously, you have the advantage as neither I, nor Mr. Higgins, have had the opportunity to inspect the pelt in person. Higgin's assessment of the pelt was made on comparison of photographs only. I would be glad to publish some or all of the written reports you possess from scientists who have examined the pelt. It could go a long way toward removing the doubts that persist out there.
Posted by Mike at 11:51 AM