A reader who saw my post on the discovery of a new species of giant crayfish (Barbicambarus simmonsi) in Tennessee, sent in a photo of his own that shows him holding a very large crayfish. The reader found the crayfish in a creek in Arkansas and wondered if it could possibly be another specimen of the newly discovered species.

He sent me the photo asking my opinion and said that he had sent the photo to the Arkansas Game & Fish Commission hoping to get a positive identification. To my untrained eye, the crayfish in the photo looked very much like the newly discovered Barbicambarus simmonsi; however, other than having a taste for them, I am no crayfish expert. So, I decided to go straight to the source. I sent the photo to Dr. Chris Taylor of the University of Illinois. Dr. Taylor is one of the researchers credited with making the discovery of the new species of crayfish in Tennessee. Both inquiries were answered quickly. 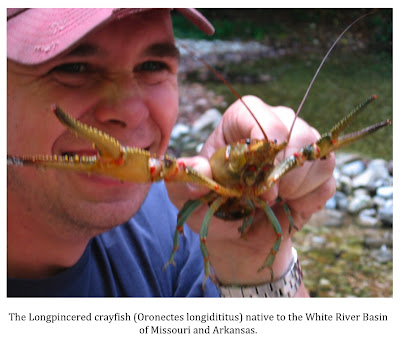 From Brian K. Wagner of the Arkansas Game & Fish Commission:

From Dr. Chis Taylor of the University of Illinois:

"Thanks for your note and interest. The animal in the photo is known as the Longpincered Crayfish and is found commonly in the Ozarks. It is indeed a very large species and would give our new species a run for its money."

I would like to thank both Brian Wagner and Dr. Chris Taylor for taking the time to reply to these inquiries. It would have been very easy, and far more typical, especially of a government agency, to just ignore the emailed question. Neither did. I appreciate that very much. It speaks well of them. 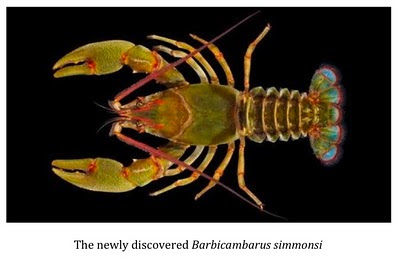 While the new species, Barbicambarus simmonsi may be larger than the Lonpincered crayfish of the White River Basin, those who reported it as being twice as large as any other known North American crayfish may have been guilty of a bit of hyperbole. As Dr. Taylor himself said in regard to the crayfish in my reader's photo, "It (longpincered crayfish) is indeed a very large species and would give our new species a run for its money."

While it would have been fun to have helped in establishing the range of a new species, the fact that the crayfish in the photo is not a specimen of the Barbicambarus simmonsi is not bad news. In fact, it is good to know that there is not one, but two, species of enormous crayfish out there.

My thanks to the reader who sent in the photo.
Posted by Mike at 10:45 AM