How Big Is The World Record Gar?

We Texans like to believe that everything is bigger and better here in the Lone Star State. While that is not always true, it does seem to be the case when the discussion turns to world-class alligator gar (Atractosteus spatula).

What got me thinking about big gar was a story I stumbled upon over at the "Fishing Fury" site. There is a short post about what was considered to be a potential new world record gar caught with a bow and arrow back in May of 2009. The post mentions that the big gar was caught by Johnny Morris, of Bass Pro Shops fame, with the help of the Garzilla guide service in a private lake near the Trinity River. The Garzilla Bowfishing Guide Service is listed as being physically located in Elkhart, Texas so I assume the big fish was taken somewhere in that general vicinity. According to both sites the fish went 8' 3" in length and weighed in at a whopping 230 lbs. 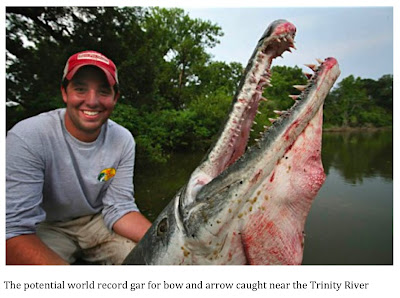 Alligator gar records are difficult and a bit confusing to research. Just give it a try and you'll see what I'm talking about. I found dozens of sites that listed the weight and/or measurements of THE world record alligator gar. There were nearly as many different lengths and weights listed as there were sites. It reminds me a bit of the way boxing has a half a dozen organizations that sanction champions in each weight class. I saw at least a half dozen listings for THE record fish. Some based the title on the length of the gar and some on the weight. I even found one site that listed the world record based on girth (that's a first). On top of all that confusion is the fact that there are different world records for fish caught on rod and reel, bow and arrow, and "other means", which basically means via trotline, jug line, or cane pole. You also have records for the largest gar caught by a senior citizen angler, the largest gar caught by a junior angler, and the largest gar caught in private waters. There certainly seems to have been a whole lot of "world record" alligator gar caught over the years. So, what's the deal? Was the alligator gar caught by Johnny Morris back in 2009 a new world record or not? 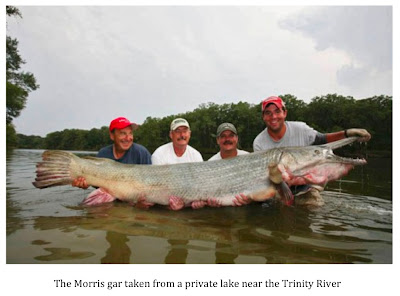 The one thing that nearly all of these "record" fish I came across had in common was that they were caught in Texas. That being the case, I decided to peruse the Texas Parks & Wildlife site to see what they had to say. The TP&W currently lists three fish as state records. The official record alligator gar taken on a rod and reel in Texas is a 279 lb. monster pulled from the Rio Grande River back in 1951 by Bill Valverde (no length was listed for this fish). The state record for an alligator gar taken with a bow and arrow is an 8' 0" long 290 lb. specimen taken in July of 2001 on the Trinity River by Marty McClellan. Finally, the recognized state record for an alligator gar taken by "other means" is an 8' 0" leviathan caught on a trotline back in January of 1953 by T.C. Pierce, Jr. that tipped the scales at 302 lbs. This beast was pulled from the Nueces River in South Texas. These were the officially recognized state records as of January 12, 2011. 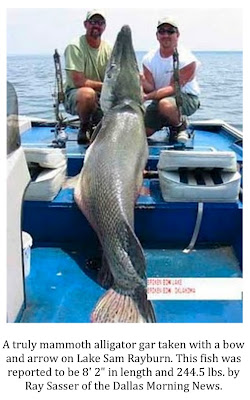 It seems the gar taken by Johnny Morris is not recognized as the Texas state record much less the world record. Of course, the Texas Parks & Wildlife is recognizing state records based on weight not length. The Morris fish may well be recognized as the longest gar taken in Texas but, if so, the TP&W site does not mention it. I'm guessing this is why the original story escaped my notice. The fish might have been submitted for record consideration but came up short, or light, as the case may be.

So, which of these fish is recognized as the world record alligator gar? The answer may very well be none of them. In my previous research for other gar posts, I found a site that listed the world record alligator gar to be a fish taken from the Saint Francis River in Arkansas in the 1930s that weighed in at an astounding 350 lbs. Yet, even this monster might not be the real record. Take a look at the photo below. I have heard this fish was caught somewhere in Mississippi in the 1920's. I believe the photo to be genuine but don't know if the location or date of the catch listed is accurate. 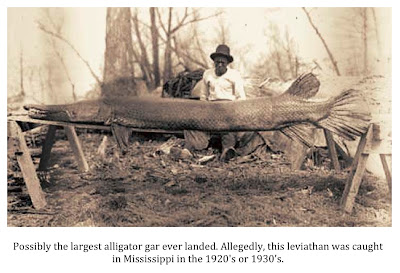 To be honest, when it comes to which fish should truly be recognized as the world record alligator gar I am more confused than ever. What has become clear, however, is that Texas truly is the home of some of the largest freshwater fish in the world. So, if you are looking to haul in a world record alligator gar this is the place. Not only do we have the best fishery on the planet for these giants but there seems to be at least a half a dozen different ways for your gar to be recognized as THE world record.

How could you ask for more than that?
Posted by Mike at 9:27 PM