The story of a man named Bill Warren, who claims to have purchased the pelt of a thylacine at a garage sale, has caught the eye of TBRC Chairman Alton Higgins. Read Alton's thoughts on this story below:

One ostensibly extinct animal that I'm very interested in is the Tasmanian tiger, or thylacine (Thylacinus cynocephalus), an apex marsupial predator (Figure 1). As indicated by the name, the species lived on the island of Tasmania, but it was also found on the Australian mainland, although it appears that the species was approaching extinction on the continent prior to European settlement. Personally, I think a few still survive in the most remote reaches of Tasmania. 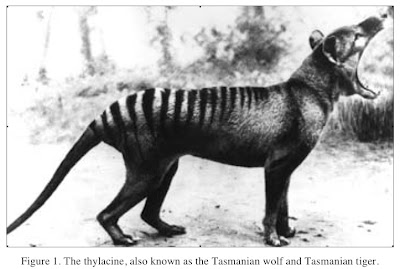 Recently a story came out about a guy, Bill Warren, who says he bought a thylacine pelt for $5 at a California yard sale. If true, it could be a very valuable remnant artifact of a tragically persecuted species (Figure 2). 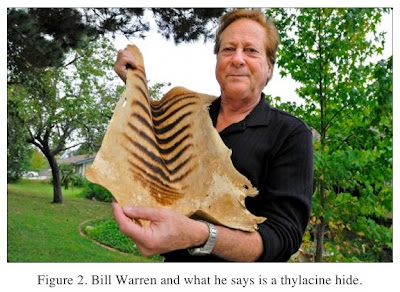 When I first saw the pictures of the find I was pretty excited, but the more I looked at the skin the more I wondered if it was something else. The folks at the Centre for Fortean Zoology and others suggested that the hide should be compared to that of a zebra duiker (Cephalophus zebra), a small (9-20 kg) antelope living in the dense forests of west Africa and one of the world’s most distinctively colored mammals (Figure 3). 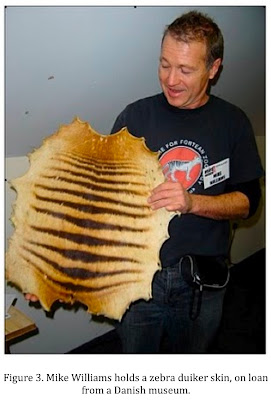 I attempted to match a museum zebra duiker skin to a photograph of a live zebra duiker to see how well they compared in terms of the striping patterns (Figure 4). Based on the color of the museum skin, it looks like it has undergone some foxing, but the stripes aligned closely, as would be expected. The primary possible difference is that the museum skin appears to have an extra stripe in the shoulder area. 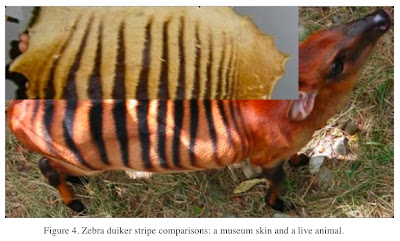 The mystery skin was also compared with the photograph of a live zebra duiker (Figure 5).

Finally, the mystery skin is shown side by side with the museum skin (Figure 6). 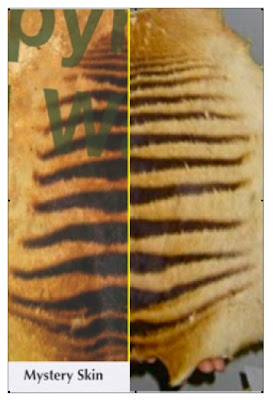 Figure 6. The mystery skin compared to a zebra duiker skin (right side of image).

In each of these comparisons, in my opinion, the putative thylacine skin appeared to correlate closely with the zebra duiker museum skin and the photograph of a living zebra duiker, lending credence to suggestions that the skin in question is not that of a thylacine.

A few years ago I was involved with trying to determine if the Emmerich photos taken in Tasmania were those of a thylacine. As part of that effort I examined patterns of thylacine stripes and observed that the initial position of stripes along the spine were very consistent, at least among the individual thylacine photographs available on the Internet (Figure 7). In attempts to perform a similar comparison, I was not able to achieve a satisfactory match between the mystery skin stripes and those available for examination in known thylacine photos. 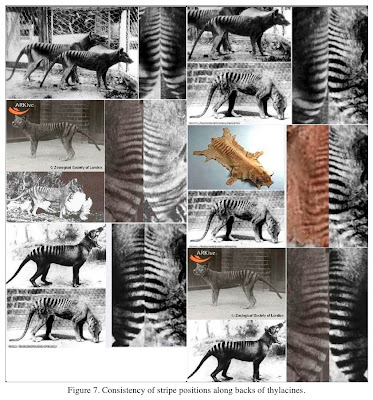 Based on stripe pattern comparisons alone, I’d have to posit that the skin purchased by Bill Warren is probably that of a zebra duiker rather than a thylacine. Another factor to consider is that of the tendency of thylacine stripes to stay bold across the rump and onto the tail, as opposed to the characteristic of zebra duiker stripes to become less prominent towards the tail. While skin from the tail area of the mystery skin is missing, if it is indeed that of a thylacine, what is present matches the expected pattern of the zebra duiker.

The zebra duiker is classified as a threatened species. I’m sure any number of natural history museums would be happy to have it in their collection. If the skin is indeed that of a thylacine, interest will be even greater. Hopefully Mr. Warren will allow definitive testing to be conducted on the pelt. If nothing else, this whole episode has demonstrated that “cryptids” of various stripes can indeed pop up in unexpected places.