The Truth About the Broken Bow Gar

Below are a couple of photos of bow fishermen with a monstrous alligator gar. These pictures, for those interested in such things, are probably familiar as they have been circulating around the internet for years. What may not be known to most is the true story behind the photos. 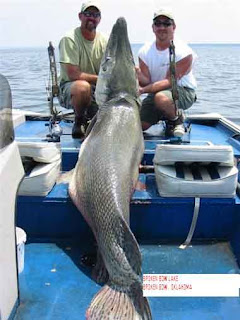 First, the photos are real. That is a real fish taken using archery tackle. What is not factual is the information regarding where the fish was caught and its actual weight. According to the story circulating on the internet, and a caption on one of the photos, the huge gar was caught in Oklahoma's Broken Bow Lake and weighed in at a gargantuan 327 lbs. The story gets even better. The usual email includes a theory that giant gar, like the one in the photos, could be responsible for the disappearance of swimmers in several Oklahoma lakes. It's a great story. The only problem is that none of it is true.

The gar, while truly a giant, was taken from the Sam Rayburn Reservoir in East Texas by Keith Riehn and Robin Parks in 2005. According to several sources the gar measured 8' 2" in length and weighed in at 244.5 lbs. The Dallas Morning News confirmed the origin and circumstances behind the catch in a 2005 article. In part, the article reads, "Using tackle that would suit Luke Skywalker, two Missouri archers won a tag-team version of gar wars at Sam Rayburn Lake, bagging a gigantic alligator gar that weighed 244.5 lbs. It is the pending Bowfishing Association of America world record. Curiously, the last line of the article reads, "The giant fish is not, however, largest of its species taken with bow and arrow in Texas." Why this other, apparently larger, gar is not recognized as a bowfishing record is not clear. At the time this article was written, the heaviest gar ever taken in Oklahoma weighed a "mere" 184 lbs. The fish was taken by Sean Chatham on the Okie side of the Red River.

The assertion in the email that huge gar could be responsible for disappearing swimmers in Oklahoma lakes is interesting to ponder but baseless. While gar are huge and fierce looking they don't seem to see people as prey. Periodically, stories will circulate about a gar that bites the foot of a person who had their legs dangling in the water from a pier or boat. This has happened but mistaken identity seems a more logical explanation. Most wounds are inflicted upon fishermen as they try to haul a big gar into their boat. Gar have large mouths full of razor sharp teeth and they 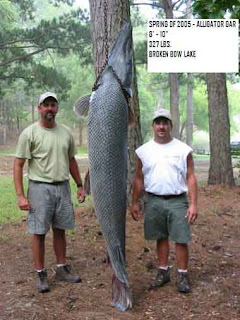 thrash around quite a bit when boated. The closest thing to a gar attack I've heard of didn't actually include a gar at all. MonsterQuest did a show about giant fish that included a feature on giant muskie. It seems a very large muskie did, in fact, attack a person who was wading in shallow water in a northern lake. I've not heard of any similar stories regarding gar in Texas.

Why hoaxers would want to falsely credit another region and lake for this catch is a mystery. What is for sure is that the gar in these photos was taken in the Lone Star State. This shouldn't be a surprise. After all, everything is bigger in Texas. Oh, except for gar. It seems the largest gar on record, weighing in at an astounding 350 lbs., was caught in the Saint Francis River of...Arkansas. Let's just keep that between us, ok?
Posted by Mike at 9:35 PM