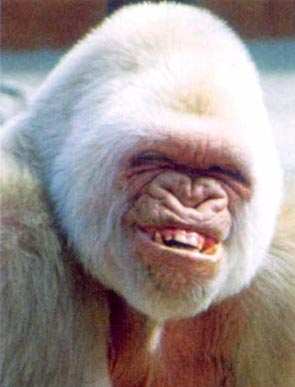 Below is an article that was published in the now defunct Houston Daily Post in August of 1901.

Strange Adventure that Befell Commissioner Bucher in San Jacino Bottom.
Commissioner J. C. Butcher, who came in from Harrisburg yesterday to attend
a meeting of the commissioners` court, was engaged during the recess hours
yesterday in relating a strange adventure which befell Mr. C. L. Bering and
himself a day or so ago while they were hunting in San Jacinto bottom. In
their search for game they penetrated deeper and deeper into the recesses of
the wood and in a spot where the foliage and the long grass were so thick as
to almost block their passage, they came face to face with a wild man.

The strange creature of the wood had long mane like hair falling far below
his shoulders and he shook a mat of it from in front of his eyes and glared
at the hunters as if intent on disputing their right to the wilds.

The wild man was clad principally in a yard of sunshine, which struggled
through a rift in the trees, and a devilish smile of defiance. Additional to
these the strange creature was attired in a breech clout of leaves.

The hunters were so taken aback by the unexpected presence and the uncouth
appearance of the stranger that before they had time to test the
conversational powers of the wild man he glided away into the dense forestry
without more ado.

The description of the wild man obviously matches up well with modern descriptions of the sasquatch. The area from which this account originates is one that has a rich history of sasquatch sightings and one from which reports still come today. The story is just one of many accounts that dispute the theory that bigfoot was "born" in the summer of 1958 when Jerry Crew found large footprints on his worksite near Bluff Creek, California. The fact of the matter is that there are many pre-1958 news accounts that describe "gorillas", "wild men", "monkey men", or hair-covered "giants". Some of these reports go back to the earliest days of colonial America. Chad Arment wrote a wonderful book entitled The Historical Bigfoot that documents sightings of creatures matching the classic description of the sasquatch from the early 1800s up to the 1940s. I highly recommend it.

Getting back to this particular article, I was interested in the "devilish smile of defiance" exhibited by the wild man. The great apes are known to make a wide range of facial expressions including smiling. We have all probably seen a chimpanzee or orangutan on television smiling on cue as part of an act of some kind. What may be less well known is that this "smiling" behavior is seen in wild apes as well. The 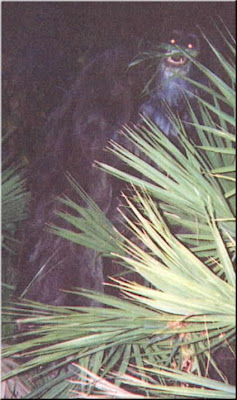 expression is not due to happiness, however, but is a sign of agitation or anxiety. The well-known pictures of an orangutan-like creature taken in Florida in 2000, dubbed the Myakka ape photos, seem to show this anxious smile-like expression. Smiling sasquatches have been reported but, as with reports of swimming, fishing, tool use, and rock throwing, the claims were deemed too fantastic to possibly be true. We now know the great apes do make a facial expression similar to smiling when anxious or agitated. Knowing this, reports of smiling sasquatches no longer seem quite so far-fetched.

This 109 year old account is certainly interesting. The reference to a "devilish smile" is exactly the small sort of observation that can take a reported sighting from the "somewhat interesting" to the "truly compelling". Any sort of observation that fits known great ape behavior, yet is not generally common knowledge to most of the public, lends credence to a sighting report in my eyes. This detail in this old newspaper account certainly fits that bill.

My thanks to Craig Woolheater for sending me this article.
Posted by Mike at 10:11 PM