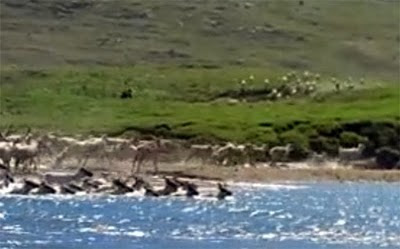 There is an interesting bit of footage making the rounds on the internet showing a dark figure, seemingly, stalking a herd of caribou as they cross a shallow body of water. The footage is part of an IMAX documentary called The Great North.

The film was allegedly shot from a great distance using a powerful telescopic lens in Labrador. A large herd of caribou are seen crossing a shallow stream or river when a dark and upright creature appears. The figure rises up from the opposite side of a small rise in the terrain and moves quickly to the right as if pacing/stalking the herd. The figure is visible only for a few seconds before it squats back down behind the rise. I'm not sure but it looks to me like the dark figure may pop up again very briefly before disappearing for good. No mention of the figure is made in the narration of the scene. You can access the entire documentary below (embedded from Hulu). The clip in question begins at only about the 9:00 mark of the film. You will have to endure a 30 second commercial before viewing the footage.

The clip below is embedded from YouTube and shows a slowed down and zoomed in version of the clip.

Usually, I don't post "blobsquatch" photos or footage. For example, the recent trailcam photo taken in Minnesota showing what is clearly a man in some sort of camo suit or costume got zero attention on this blog. This piece of footage is more intriguing, however. The figure is clearly, to me at least, some sort of upright figure. It does appear to have some bulk to it as compared to the bounding caribou in the vicinity. The figure seems to be a uniformly dark color. If you look at the caribou the sun light reflects off their backs making for a glossy and shiny effect. The light does not seem to reflect much at all off this dark figure. No glossy coat here. Whether this makes it more or less likely to be a real animal would depend on the position of the sun, I suppose.

The distance from which the footage was obtained would seem to make the figure impossible to identify. Likewise, the figure appears so tiny that zooming in too close would likely cause the figure to blur into a pixellated mess. The key here is that this particular piece of footage was shot using IMAX technology. It would seem to be a safe assumption that the zoomed in footage on YouTube is not the original IMAX footage. If ever it were possible to zoom in and analyze a piece of footage to see if enough detail were present to positively identify a subject as human, or something else, it would seem to be now.

It is possible that this figure is nothing more than a photographer in camo trying to obtain footage or still shots of the caribou herd from a different angle than the long shot. The footage is, according to everything I've read, about ten years old. It would probably not be too hard to go back, find the people involved in the shoot, and see if they recall their locations for this particular scene. If it can be shown that no member of the documentary team was in that particular location we might have something. In the meantime, the high definition IMAX footage should be analyzed. Maybe, just maybe, enough detail could be gleaned to positively identify the figure as human. It is also possible that details could surface clearly showing the figure is not a human. In that case, we might have something powerful indeed.

As it stands, The Great North footage is just one more compelling piece of video. It proves nothing one way or the other at this point. It is interesting, however. I hope it is analyzed soon.
Posted by Mike at 9:17 PM