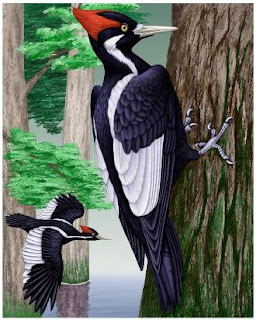 Some potentially fantastic news is being reported over at the Cryptomundo website by Loren Coleman.

A gentleman named Daniel Rainsong is claiming to have multiple, clear, and definitive photographs of a living breathing Ivory-Billed woodpecker. The legendary bird was photographed in the Sabine River Basin in December of 2009 and again at a later date. If true, the Holy Grail of ornithology has been located. Read the Cryptomundo post here.

The Ivory-Billed woodpecker once dominated old growth forests all over the south. It is a very large and striking woodpecker that has been dubbed the "Lord God Bird." The Ivory-Bill has been thought likely extinct since the mid 1900s. Periodically, reports of Ivory-Billed woodpeckers have trickled in from southern states. It seemed that most such reports turned out to be sightings of the similar looking, but smaller, Pileated woodpecker. The compelling sightings were never accompanied by photographic evidence. An expedition sponsored by Cornell University produced some interesting, but ultimately inconclusive, video of a woodpecker in flight that could have been an Ivory-Bill in 2004. The video was shot in the swamps of Arkansas but could not be duplicated.

According to Loren Coleman, Mr. Rainsong is a man who is very familiar with the differences between the Pileated and Ivory-Billed woodpeckers. Sources seem to be very confident that Rainsong would not mistake a Pileated woodpecker for an Ivory-Bill. Coleman goes on to report that the photographs have been sequestered to protect Mr. Rainsong's right of claim to this rediscovery. After confirmation of Rainsong's photographs, they will be released to the public in conjuction with biologists from Louisiana State University, Florida Gulf Coast University, Iowa State University, and Cornell University.

I really hope this turns out to be the real deal. It would be a true boon to the efforts to preserve potential Ivory-Billed habitats in southeast Texas and southwest Louisiana. This might allow the "Lord God Bird" to re-establish itself in its former haunts. The protection of these areas could only benefit other species as well.

Keep your fingers crossed...
Posted by Mike at 6:54 PM