A Giant Snake in Lake Travis? 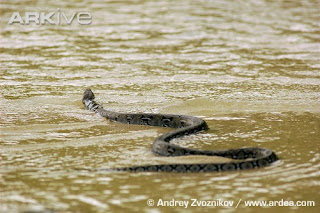 Below is an email I received a while back from a reader who claims to have spotted a very large snake while fishing Lake Travis back in 2003. The text of his email is below:

I was surfing and found your web-site. Nice one.

Under 'Giant Snakes' you asked anyone with any info to contact you. From what I have read about your camera stories, you are here in Central Texas, so this story should be fairly easy to investigate.
In 2003 I was fishing, (alone of course), on Lake Travis and saw a large snake crawl from one point of a cove to the other.
Now I have been hunting for over 44 years and have been fishing much longer than that. I have seen beaver, nutria, deer, coyotes, bobcats, dogs, cats (yes, cats), goats, sheep, mules, horses....etc, ad nauseum, swimming in rivers and lakes before.

This was a big snake.

Head about the size of both my fists. It stopped several times, picked its head up from the water about a foot, and looked around. I guess it was worried about the boats on the lake racing by. Watched it crawl from one bank, starting in a few inches of water, and swim to the other, where it disappeared in a large tangle of tree roots and brush. Never saw it again.

Told my neighbor and my fishing buddy but of course I just got the old, "Look who has been drinking too much." look and smile.
Anyway, there's some info for you. You can contact me through e-mail, if you have any questions.

Lake Travis lies on the Colorado River northwest of Austin in Travis and Burnet Counties. It encompasses 18,622 acres and has a maximum depth of 190 feet. Lake Travis is a pretty typical western impoundment as it is dominated by rocky banks, steep cliffs, and bluffs. There is very little hydrilla or other aquatic vegetation in the lake. The water is typically very clear. I believe a large snake could survive in and around this lake. Potential prey animals found in this area range from small mammals like mice, rats, rabbits, raccoons, armadillo, and opossum. The area also is home to a population of wild spanish goats that could easily find themselves on a large snake's menu. Small ranches dot the area as well making domestic animals vulnerable to a large snake such as a python or boa. Add to the mix the fish and small amphibians that inhabit the lake itself and you have a veritable buffet.

I have sent a reply email to this reader trying to get some more detail. I would be curious as to the color pattern of the snake, the distance he actually watched it swim, and his best estimate on the length and girth of the snake. I have yet to hear back from the reader, however. I will say this is likely my fault as I have taken entirely too long to get back to him. Hopefully, he will reply soon and I can update this post with some additional detail.

The possibility of a breeding population of giant exotic serpents in the swamps, lakes, and waterways of Texas is a frightening one. The state of Florida is already dealing with this issue. Many native species have no defense and are ill equipped to deal with a non-native apex predator. The ecological impact to native species in Texas, and through out the south, could be devastating. Reports of giant snakes have already started to trickle in from southeast Texas, which is home to many swamps, marshes, rivers, and slow moving bayous. All would be ideal habitats for snakes of all types.

The report from this reader is not the first such story I have heard regarding giant snakes from central Texas. I have heard tales, on more than one occasion, of a large snake that has been sighted in and around the 906-acre Lake Bastrop. Lake Bastrop lies roughly 35 miles southeast of Austin. What makes the tales of a giant snake inhabiting this body of water so interesting is the fact that Lake Bastrop is a cooling lake for the Lower Colorado River Authority's Sim Gideon Power Plant. It would seem a cold blooded animal, like a snake, would find the perennially warm waters of a power plant lake pretty inviting.

I would very much like to hear from readers regarding encounters with large snakes in the Lone Star State. You can contact me via the 'comments' section below this post or email me directly at Texascryptidhunter@yahoo.com.
Posted by Mike at 8:31 PM