I managed to get out and check on my game cameras this afternoon. I was three weeks past due on checking on them. This was due mostly to weather related issues. We’ve actually received a fair amount of rain over the last several weeks and I knew the road into the area would be very muddy and that the creek bed in which the cameras are deployed would be full of water. I didn’t want to get my truck stuck and walking that creek while it was full of cold, rushing water didn’t appeal too much to me so I decided to bide my time until things dried out a bit. 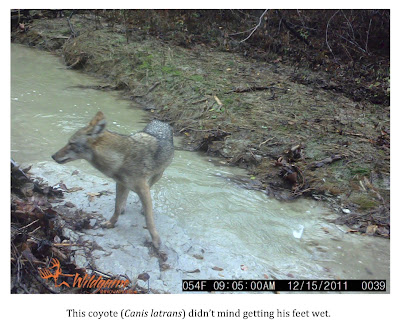 Finally, I got to the point that I couldn’t stand it anymore and decided to give it a go this weekend. The road in was still very soft but passable so I made my way to the creek. The water was still flowing but had receded enough so that I could traverse the creek bed so in I went.

I only had three cameras operational for this last set. You may recall that one of my Cuddeback cameras was submerged in rising waters during a very heavy rain event last month. I’ve cleaned it up but still don’t have it working at this point (I did purchase a used Cuddeback that I placed out today so I’ll have four cameras deployed for this next set). Since there has been water in the creek bed most of the last six weeks I was not expecting as many pictures as usual from the location. It turns out I was right; however, several of the photos I did capture more than made up for the lack of quantity. 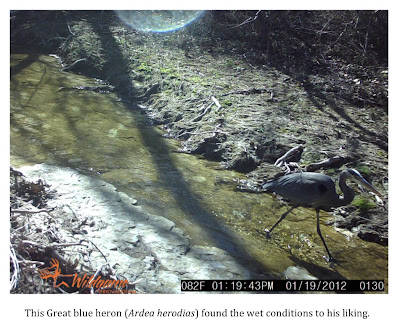 While none of the pictures captured any unusual animals this time around there were some outstanding shots. I particularly liked one coyote shot and another of a great blue heron who were both walking the creek. These two photos, while very nice, were far from the stars of the set, however. That honor belonged to three bobcat kittens and their mother.

Three bobcat kittens (Lynx rufus) appear in the lower left-hand corner of the photo below. You can see the eye-shine of one of the kittens clearly and a second slightly to the left of the first. It appears to be descending the bank and moving toward the creek. The third kitten is not easily discernible in the photo but can clearly be seen in the video that follows the photo. 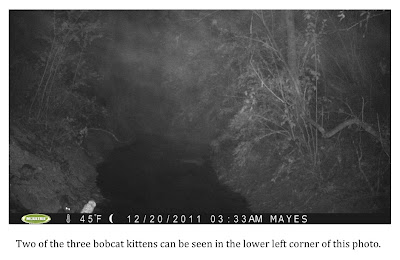 When I saw this photo and realized I had managed to get these “baby bobs” on video, I was thrilled. I also wondered where the mother might be. It would not be like a bobcat mom to allow her kittens to wander too far out of her sight. It didn’t take too long to figure out that mom was right there all along. The video below shows the mother jumping up into the tree to inspect my camera. She is so close to the camera that she appears a solid, ghostly white; however, there is no mistaking her identity. My guess is that she was with the kittens all along, maybe a bit closer to and almost underneath the camera location, and became aware of the camera once it fired. This is especially interesting as this is a digital, supposedly silent, camera that utilizes infrared and does not use a flash. What alerted her to its presence is a bit puzzling. Regardless, become aware of it she did and she quickly jumped up onto a branch to check it out and make sure it was not a threat to her young. She inspected the camera briefly, turned, and jumped down out of the tree. This was the only time I saw her or her kittens during this set.

The presence of bobcat young in late December is a bit unusual. I’m certainly not going to try to pass myself off as an expert on bobcats but from what I’ve learned they usually give birth in April or May. The gestation period is 60-70 days. So, this means that this female was mating in September or October. Normally, mating takes place from February through March. Obviously, everything happened earlier than that for this female. The whole cycle was accelerated for some reason. Could this be due to environmental conditions or is this bobcat family just one of the exceptions when it comes to the normal reproductive cycle of the species? I have captured quite a few photos of different bobcats over the last few months. Now that I’ve seen the female with kittens, it is likely that some of the individuals photographed were males following her around in the hopes of mating. 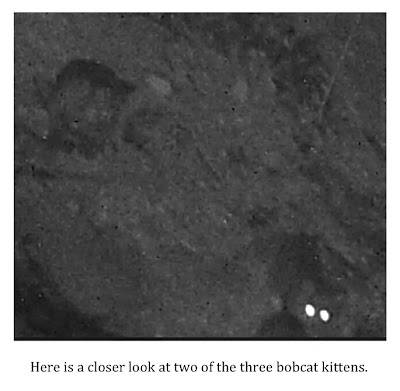 This location continues to yield some great images and interesting data. The previous set yielded images of river otters (never before documented in Bell County) and this set gave me images proving that at least some of the bobcats found here are mating and giving birth much earlier than the expected norm for the species.

I wonder what the next set of photographs will show?
Posted by Mike at 8:52 PM