Readers continue to send in reports of their encounters with black panthers from across the Lone Star State and beyond. Most of these reports have been submitted via the “comments” option at the bottom of various posts on big cats and are submitted by people who prefer to remain anonymous. This is unfortunate as it does not allow for any follow-up on my part. I thought I would share some of the latest reports that have come my way with you all.

Remember that I have no way of verifying the veracity of these reports. Having said that, and I think you’ll agree, the reports are not overly sensational and do not seem full of hyperbole. Nearly all of the reports are short and to the point. They describe what was seen and don’t go into a lot of extraneous detail. Now, having got all of that out of the way, here we go:

“I can't believe we took our picture card out of our camera and a hunter on our ranch saw what they thought was a black panther! We live near Hillsboro, Texas!”

“I live in western N.Y. and saw a black panther in our back yard.We live in the country and have 10 acres that are next to another 100 acres belong to a family member.There is an old apple orchard on the property and deer, coyotes, rabbits,turkey,racoons- plenty of food for this cat.It does concern me, as our dog roams the land rather freely and wouldn't be able to contend with an animal this large.I have to say, it looked beautiful,lying in the sun, but what havoc it could wreck in our lives. I don't know the laws about protecting our pets and would really hate to waste the animal's life, but we need to be safe. Any suggestions?” 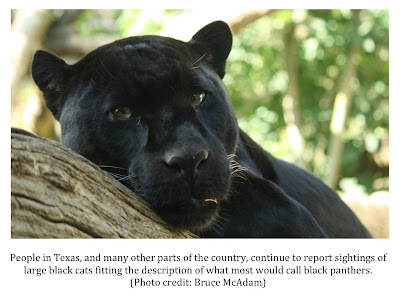 “I live in Frisco and once saw a large dark brown or black cat while driving at night, not more than a mile from my home. It was most definitely a cat with a long tail, although it was more like a German Shepherd in size.”

“Last week while hunting in my deer stand in llano, TX. I saw a large black cat. At first i though it was a bobcat and rejected the fact that it may be a black cougar but as i looked at it harder i noticed the cat was abnormaly large and had a tail as long as its body, and he was absolutly black. In a daze i grabbed my gun and shot twice at him. And missed before he tauntingly turned around a walked off. I later found out my guns scope had been knocked off sight. I told the land owner and he said he has seen him before. To me i have all the proof i need to know the cats are real.”

“I spotted a large black cat in the field next to my house this morning. I live in Denison Texas. It's long tail and the way it leapt through the grass assured me this was not a bobcat.”

“I'm located south of Fort Worth and people around here, including myself, have spotted large black cats, as in panther size, I've been told many a story yet every game warden denies it.” Submitted 1/5/12 from California regarding a sighting in Hunt, Texas

“Tell your doubting game wordens to go to Hunt Texas, from there drive a few more miles to what used to be called the " HEART OF THE HILLS GUEST RANCH " Maybe it still is. Once there go to the main building which should be about dead center of the other smaller buildings, The main building is backed by a large mountain/cliff as are most of the smaller buildings. One will have to work your way around to get to the top, I'm sure the owners will know the route, once on top get your bearings by walking towards the main building so as you can look down on it, you'll know your there because you'll find several 3 toed dinasaur tracks set down 5 or 6 inches in solid stone, I know, there the one's I played in as a boy in the 1950's . Now your in Black Panther country, this is where I saw the yearling pair of black panthers as a boy with my dad. Now, just set up some of those fancy tree cameras, don't check them but every couple wks. as to give time for your scent to wear off, and I'll bet you dimes to dollars you'll get the proof them city boys says ain't there. If nothing else, you get to see some tracks made a few million years ago.”

Submitted 1/9/12 from the Texas Hill Country

“Today, Jan 9th 2012, I spotted a solid black mountain lion. I live in the rural Texas Hill Country. The cat was the size of a medium dog with a tail as long as the body. It was 2:30 pm in the afternoon so there is no mistake of what I saw.”

“Coming up HWY 285 south of Fort Stockton, TX. I saw a black panther crouched down on the side of the road waiting to cross. I slowed down and saw it clearly and am positive it was a black panther. A local rancher told me he has seen them in that area as well.”

These are just some of the latest reports. I’ve received others. Could some of these people be mistaken about what they saw? I suppose. The fact of the matter, however, is that people continue to claim sightings of an animal that is not supposed to exist. What are they seeing? They can't all be mistaken can they?

I would be especially interested in any black panther sightings here in central Texas. I have game cameras ready and available for deployment and would love to take a shot at getting a photograph of one of these elusive big cats. Once we have a picture we might be able to deduce whether they are melanistic jaguars, exotic black leopards, jaguarundis, unusually dark cougars, or something else.