It is funny how things work out sometimes…

As regular readers of this blog know, I started a camera-trapping project here in Bell County in June of last year. I’ve chased mountain lion reports from one end of the county to the other. I have yet to capture a photo of one of these elusive big cats but remain hopeful. There continue to be periodic sightings of a cougar in the general area around my camera locations but things seemed to have slowed down quite a bit. It is possible the big cat has moved on.

While not getting that cougar photo to this point, despite sightings very close to my camera locations, has been frustrating, the project has not been a failure. As is often the case with these sorts of things, something very good has come out of it…just not the good thing I targeted in the beginning. 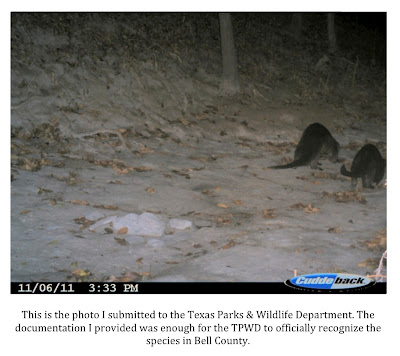 Last month I retrieved images from my cameras and was surprised to find a photo of a pair of river otters (Lutra canadensis) walking down a dry creek bed. I’ve lived in the area since 1987 and had never heard anyone mention having seen otters before. I did a bit of research and found, according to The Mammals of Texas – Online Edition, otters had never been documented in Bell County. The possibility that I had documented a species previously unrecognized in Bell got me pretty excited so I fired off the following email to the Texas Parks & Wildlife Department:

"Would a photo of a pair of river otters taken in Bell County be unusual and/or something you folks would be interested in? I have a photo, taken by a game camera, of what I believe to be two otters in a creek bed outside of Temple, Tx. I was surprised to say the least. Let me know if anyone there in your agency
would be interested in viewing the photo." 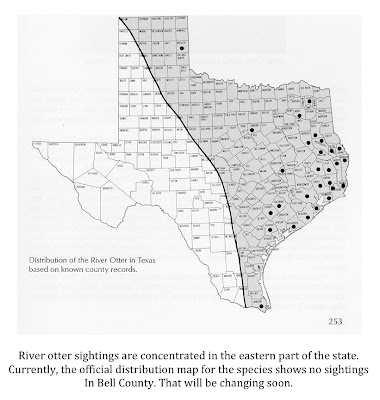 I received a reply thanking me for taking the time to submit my query and saying that they would like to view the photo. So, I submitted the photo and waited. About two weeks later I received the following reply from Gary Calkins, District Leader, out of Jasper, Texas:

“Not too much doubt what you are looking at in the photos – probably a mother and a youngster.

Would you mind taking a moment to give me a location of the sighting – it doesn’t have to be specific just something like “where Rocky Road crosses Sandy Creek” would be fantastic. That will give me enough information to plot the sighting."

After submitting the general location where the photo was taken, I asked if the picture was enough for the TPWD to officially document the species in Bell County. Here is the reply from Mr. Calkins:

“Your photo is perfect and the sighting will be added to the map. Basically – I keep the email string as a reference and the sighting will be numbered and referenced to the email string by that number so that your personal information stays confidential if the map is distributed – however, if I or someone else doing otter work needs to get any additional information we have the email to go back to.” 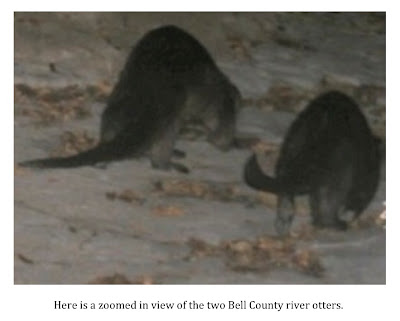 To make a long story a bit shorter, because of my photo, the distribution map for the river otter will be changed to reflect the presence of the species in Bell County. The timetable on when this will take place is not clear but it will happen the next time the map is updated. The documentation of a known species a few counties west of where it is supposed to be may not seem like an important discovery but it is actually kind of a big deal in wildlife circles. I am very, very pleased by this turn of events and think it really shows that even an amateur naturalist, with extremely limited resources, can accomplish some pretty cool things.

So, a project that got started, and continues, with the hope of getting a photo of a mountain lion has reached its high point with an accidental photo of a pair of river otters.

I'll say it again...it is funny how things work out sometimes…
Posted by Mike at 11:08 PM