Most people who follow wildlife and ecological issues to any degree are familiar with the problems that invasive species are causing in various parts of North America. The plight of Florida officials fighting the exploding Burmese python populations in the Everglades is well documented. Other invasives are making headlines and causing major problems for native species as well. Zebra mussels, snakehead fish, feral hogs, and Asian carp are all causing problems to some degree in different regions of our nation. I’m willing to bet that one invasive species, that is causing major damage to the ecology of Texas, is not on the radar for most people. The invasive animal in question? The burro.

The burro (Equus asinus), which might best be described as a small, feral cousin to the donkey, is wreaking havoc on the ecology of far west Texas. Particularly hard hit is the Big Bend area the Lone Star State. The burros are, and have been for some time, entering Texas from Mexico. The animals are aggressive and extremely territorial. Kevin Good, a special assistant with the Texas Parks & Wildlife Department says that the burros are commandeering watering holes and chasing other animals away from them. According to Good, they are also contaminating natural springs in the Big Bend area with their feces. The severe drought Texas is suffering makes each spring and watering hole vital. If native species are not able to drink due to aggressive burros or because the water has been contaminated they are going to suffer. 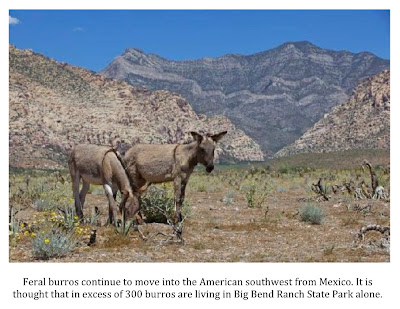 Good says the burros are stressing native populations of black hawks, gophers, mule deer, and, especially, bighorn sheep. Bighorn sheep populations have plummeted in the last few years and officials are concerned that competition from burros could doom them in Texas.

Sohatra Sarkar, professor of integrative biology at the University of Texas at Austin has spent years studying burro populations in Texas and Mexico. He agrees with the TP&WD that the burro population is out of control and poses a very real threat to the bighorn sheep population.

“They’re a threat to the entire ecology of the region,” Sarkar said. “Whichever method you choose to deal with it, the problem is very real.”

The question then is what should be done about the problem? For the TP&WD the answer is simple. Eliminate them.

Kevin Good said, “Our mandate is to eliminate all invasive species if we can. That is our priority.”

To carry out this goal of eliminating the invasive burro population the TP&WD has taken to hunting them. Park rangers are combing the 300,000-acre Big Bend Ranch State Park, one of the state’s most rugged and isolated locales, with rifles in search of these burros. It is believed more than 300 burros are spread across this vast park. So far, park rangers have shot 128 of them. This approach is not allowed everywhere in the area, however. In neighboring Big Bend National Park the burros are protected by federal law. Here state officials are forced to try to round up and capture the burros. This is expensive and extremely difficult work. The burro is very intelligent and is adept at avoiding capture. Those that are corralled have to be screened for parasites and diseases and are then taken to auction. 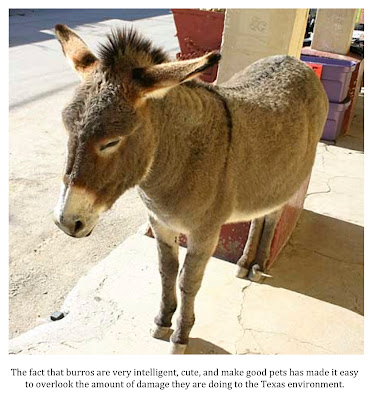 As would be expected in today’s world, the treatment the invasive burros are receiving is not sitting well with some. Animal rights groups are up in arms and some local residents remain firmly in the corner of the burros. Bumper stickers and placards showing support for the burros can be seen in and around Alpine, Texas and protests are beginning to get louder. Three dozen, or so, people attended a rally last month protesting the killing of burros in the region. Protesters sang songs and read burro-inspired poetry. They also suggested alternatives to shooting burros like darting and sterilizing them. The protesters did not seem to have any useful suggestions as to how to fund such a program, however.

Adding to the situation is that burros are incredibly difficult to round up. The rugged terrain and the high level of intelligence of these animals conspire to make capture all but impossible in many instances. It is very simply one of those things that is easier said than done. To illustrate this point, Good recounts an effort made three years ago to corral the burros. A burro rescue group was hired by the state to go into Big Bend Ranch State Park and catch as many burros as possible. Despite their best efforts the group failed to catch a single animal. 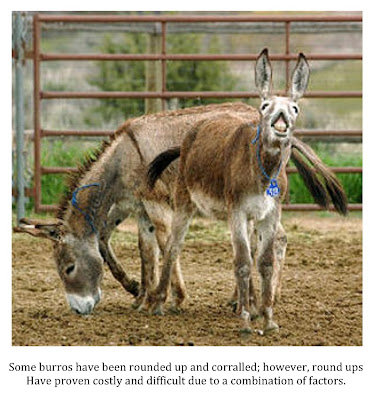 It really isn’t surprising that these burros would have some strong support. The animals are a living link to the past. The first burros and donkeys came over from Europe with the Spanish in the 16th century. The smaller burros quickly became the pack animal of choice for the arid and dry regions of the New World. The feral burros populating the southwest now are the descendents of the domesticated Spanish stock. The image of the grizzled old prospector leading his burro through rocky terrain is iconic. These burros are, in many ways, living history.

I wonder if the problem isn’t more widespread than the TP&WD might suspect. Back in the spring of 2010, while on a trip to the Sam Houston National Forest, I heard a “donkey” braying early one morning. I was nowhere near a farm or any other sort of private property. A group of my fellow TBRC members camped in the same location a couple of weeks later and not only heard the “donkey” but managed to get a photo of it. We surmised that this guy had escaped from a local and gone feral. I wonder now if he might not have been one of these burros that had somehow managed to make the trek into east Texas. The SHNF is certainly a long way from the Big Bend country but it makes me wonder. 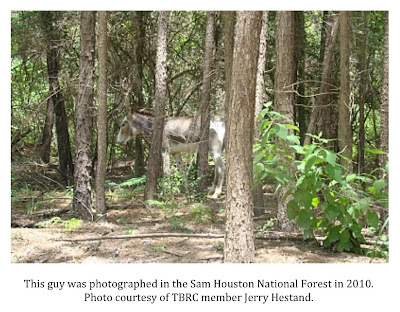 As unpleasant as it may sound to animal rights folks, the only real solution is to eliminate the invasive burros of west Texas. They are cuter than a feral hog or a snakehead but no less destructive. The native species of our state need to be protected from all invasives. It does not matter if that invasive is an ugly boar hog, a dangerous reptile like a Burmese python, or a fuzzy brown-eyed burro. Trapping, rounding up, and/or tranquilizing and sterilizing these burros is just not practical. The state simply has to, in my opinion, continue with their efforts to eliminate these invasive animals. Having said that, I also think that any rescue group or individual interested in trying to capture these burros should be allowed to do so free of charge. The TP&WD should make interested parties register with them, report where they will be attempting their round-ups, and inform them of how many, if any, burros were removed. This would involve little more than setting up a database on the part of the state and allow those who find the shooting of these burros abhorrent to put their money where their mouth is, so to speak.

One thing is for sure. The problem cannot be ignored any longer.