Those of you who have kept up with my camera-trapping project in Bell County, Texas may have noticed that I’m overdue on checking my cameras. As you can see from the schedule in the right margin of this page, the cameras were due to be checked on Saturday 12/3. Due to what has become an increasingly rare weather anomaly here in Texas, several days of heavy rains, I had to put off checking the cameras this past weekend. 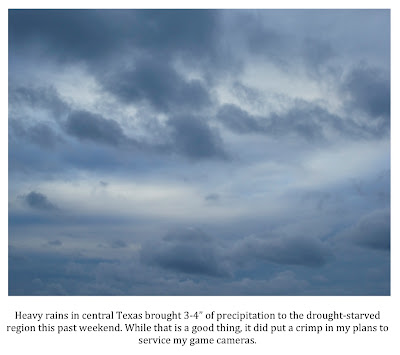 Temperatures have ranged from the 30's to the 40’s, winds have been high, and, according to my rain gauge, we’ve received a little more than 4” of rain since last Friday. In addition, I’ve been flat on my back with a very nasty cold. The rainy weather is actually wonderful news for the drought-stricken part of central Texas in which I live so I didn’t really mind putting off the camera check for another few days. I’m sure the creek bed in which I’ve placed the cameras is full of water at the moment, which would make traveling from camera site to camera site difficult. All of this being the case, I decided this was a good weekend to stay inside and watch football. The plan now is to get out and service the cameras no later than this coming weekend. It is supposed to warm up some and the rain is going to stop. I’ll give the creek a couple of days to recede and then get on out there.

I have had a report that one mountain lion has been seen in the vicinity within the last two weeks. The spot where the latest sighting allegedly took place is less than two miles from the camera location. I already know that multiple species are using this creek bed as a travel route. My hope is that eventually the mountain lion that continues to be reported will show up there as well.

As always, I’ll post the latest pictures once I retrieve them.
Posted by Mike at 5:10 PM