If you live somewhere along the I-45 corridor near Webster, Texas and your child comes home and says that he/she saw Santa’s reindeer running down the road…believe it.

Well, they weren’t Santa’s reindeer (as far as I know) but there were reindeer dashing about on and near I-45 yesterday. It seems a petting zoo was transporting a couple of its reindeer when the trailer in which they were being towed came loose from the truck. Somehow, the door to the trailer came open and the two reindeer made a run for it. 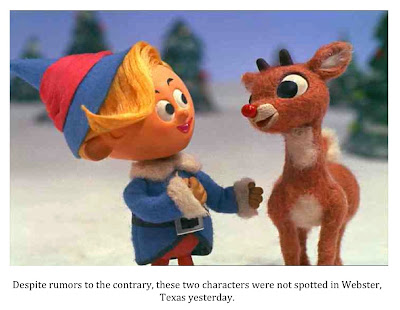 Webster police, after fielding several calls from surprised local residents regarding the reindeer, dispatched several units and helped round up the runaways. Neither the reindeer nor anyone else was injured during the incident.

Santa Claus didn’t come to town (it’s not time, after all) but a couple of reindeer did.

I guess it is just that time of year.