Chester Moore on the Giant Catfish of SE Texas

Tales of giant catfish patrolling the deepest waters of Texas lakes and reservoirs were very common in the area where I grew up. Even the occasional fisherman and/or outdoorsman in southeast Texas knew of these tales. Most of the stories from my youth centered around giant catfish that allegedly hung out near the dam of B.A. Steinhagen Reservoir in east Texas. The catfish of “Dam B,” as most called the lake, were said to be large enough to swallow a man whole. So intimidating were they, the story went, that several divers who had been sent down to inspect the dam refused to re-enter the lake once getting an eyeful of these beasts. 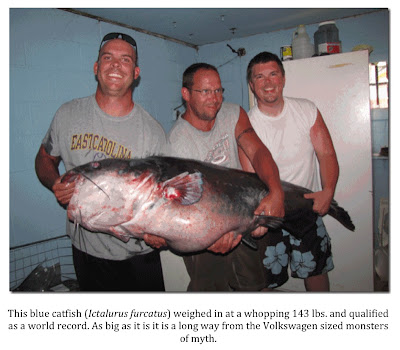 Outdoors journalist Chester Moore heard these stories too. He decided several years ago to pursue the myth and see if there could be a basis of truth behind the legends of giant-sized catfish. Moore documented his efforts in a 2005 article for the Port Arthur News called “Search for giant catfish.” I seem to recall seeing the article on Moore’s now defunct Cryptokeeper website as well. Here is a brief excerpt:

“While contemplating my surroundings, a chill went down my spine. It seemed as if something was watching me as I could see no farther than my hand in front of my face. Could it be that one of the creatures I was searching for was a reality and I was in the presence of one?”

If you missed the article you are in luck. The Port Arthur News has posted the 2005 article online. I don’t know how long it will be there so go check it out ASAP. You can access the article here. 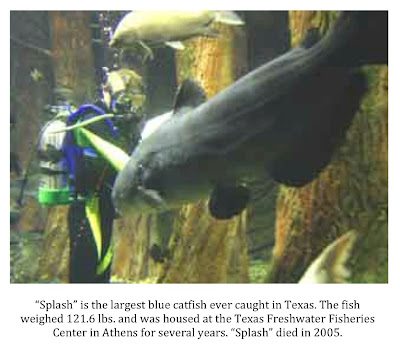 The stories of giant catfish continue to circulate to this day. I heard a rehashed version of the story I mentioned above just the other day. The only difference is that the giant fish had allegedly been seen in Lake Belton. Another factor in the recycling of these stories is a photo that has been making the rounds for years. The photo shows two men holding up a mammoth catfish. The version I received said the fish had been caught in Lake Texoma. The only problem is that the fish was a Wels catfish (Silurus glanis). This particular species is native to Europe and not North America. From what I can tell the photo is real. The story surrounding it is bogus. It is not unlike the story of the Brokenbow gar I wrote about a while back.

It seems the stories of giant catfish will continue to live on whether the fish actually exist or not. I don’t know if these fish are real. If they do exist, their size has very likely been exaggerated. Even so, every time I’m tossing a crankbait along the rip-rap in the shadow of the Lake Belton Dam I think about what might be lurking in the deep water beneath me.

It makes me smile every time.
Posted by Mike at 2:25 PM