The Monster Great White of Cojimar

When one thinks of great white shark habitat several areas of the globe spring to mind. The waters surrounding Australia would probably top the list. Close behind would be the coastal area off Dyer Island, South Africa and the cool Pacific waters off the northern California coast. Other areas like the northeastern Atlantic coastline of the United States or the waters off of New Zealand, Japan, or Chili might be mentioned. Very few would think to mention the Gulf of Mexico as great white shark habitat. Fewer still would guess that one of the largest, if not the largest, great white sharks ever caught would have been pulled from the warm waters of the Gulf. That is precisely the case, however. 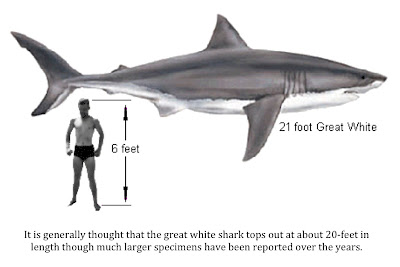 As I have mentioned here before, the great white shark (Carcharodon carcharias) does, at least infrequently, prowl the waters of the Gulf of Mexico. This would include areas off the Texas coast as far south as Corpus Christi and Padre Island. These big fish are present often enough to warrant recognition from the Texas Parks & Wildlife Department. If that revelation makes you a bit nervous just wait…it is about to get worse.

Early one morning in June of 1945 six Cuban fisherman set out from Cojimar, probably best known as the town where Ernest Hemingway wrote his Pulitzer Prize winning novel The Old Man and the Sea, in a 14-foot wooden skiff to fish for their standard fare of tuna, dorado, marlin, and, yes, sharks. Little did they know what they were in for that day.

The group took their small craft out about three miles from the coast and dropped their baited lines hoping to get into a large marlin. Several hours passed with no fish showing even a hint of interest in their bait of fresh ballyhoo. The fishermen noted that other boats in the area did not appear to be having any luck either. They may have thought this unusual but probably not. Anyone who has ever fished knows there are days when, for no readily apparent reason, nothing bites. That is, after all, why it is called fishing and not catching. At about 9:00 a.m., however, the reason for the lack of action became clear as a huge dorsal fin sliced through the water near the skiff. 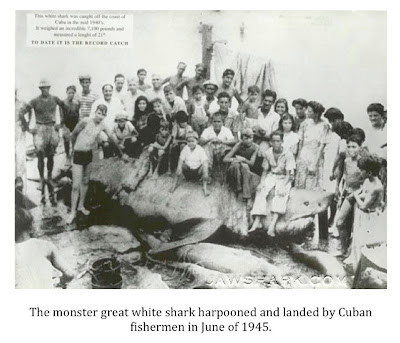 These were experienced men who fished for a living. This was no hobby. They had seen many sharks but nothing like this specimen. They knew that, if they could land the beast, it would fetch a handsome price. They had no tackle suitable for tangling with this monster so they improvised by braiding several lines together then attached that to a wire leader and shark hook. They baited the hook with half a tuna that was bitten in half by a smaller shark the previous day and tossed the rig into the water. One has to wonder what went through their minds as the great white shark approached the bait and they realized that the fish was much larger than their boat.

The shark took the bait and began taking line. No man alive could have landed this fish using his hands only. Knowing this, the men had tethered the line to several palangres. Palangres are small wooden rafts or floats that are used to add buoyancy and resistance to help wear down large fish. If you saw the movie Jaws you will remember when the fishermen attached large yellow barrels to the shark in an effort to tire it. This is exactly the same principle that was employed by the Cuban fisherman that day.

More than an hour passed and it seemed the great fish was tiring. The fishermen retrieved line and prepared to harpoon the shark. When the great white was within 20 feet of the boat it suddenly made a run straight at the keel of the boat. It struck the small craft with incredible force and began biting the keel. Wood splinters flew in all directions. The shark retreated, circled, and prepared for another run at its tormentors. The fishermen, feeling there likely would not be another chance, readied their harpoon. They were successful in harpooning the great fish but this didn’t stop the attack. This time the great white took a bite out of the rudder. The fish continued to fight mightily for a great while but finally expired and was brought back to shore. 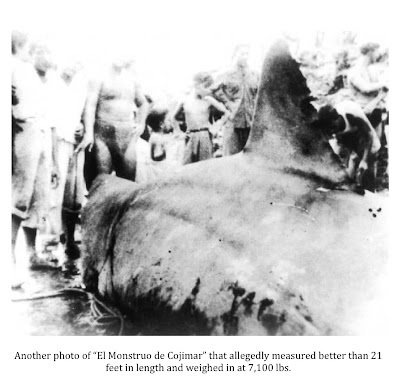 According to records the great white, dubbed “El Monstruo de Cojimar,” measured in excess of 21-feet in length and weighed an astounding 7,100 lbs. The size and weight of the Cojimar shark has been hotly debated ever since. Some, based on photo anaylysis, say the shark was closer to 16-feet in length and that it was never officially weighed at all. Regardless, it is one of four sharks, along with an Australian specimen caught back in the 1870’s near Port Fairy that allegedly measured an astounding 36-feet in length, a New Brunswick, Canada fish that is said to have been even bigger at 37.6-feet in length caught in the 1930’s, and, most incredibly of all, a great white caught by a Portugese trawler just west of the Azores that was said to be a mind-blowing 41.2-feet in length, that are generally thought to be the contenders for the title of largest great white ever.

While the accepted maximum size of the great white shark is roughly 20-feet, sightings of larger sharks continue to come in from time to time. One of the most impressive recent sightings is of a huge shark that bit another great white measuring 11-feet long nearly in half off Stradbroke Island, Australia back in October of 2009. The smaller shark, a substantial fish itself, was hooked on a baited drum line and was a sitting duck for the much larger great white. Even more recently, a “dinosaur-sized” great white was seen attacking and “swallowing a man whole” off a South African beach in January of 2010. Huge sharks do still troll the oceans of the world. And, yes, that does, at least occasionally, mean the Gulf coast of Texas. 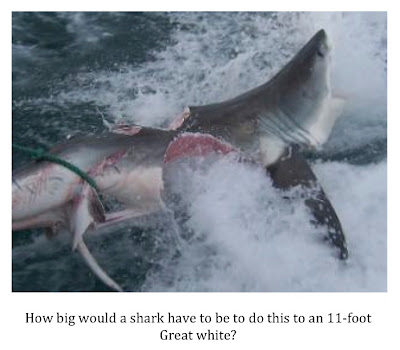 It is true that no specimen approaching the size of the monster great whites mentioned above have been seen off the Texas coast; however, this species does show up off our beaches from time to time. If more typical great whites have been seen off our coastlines then there is no reason to think that a larger specimen might not make a periodic appearance as well. A monster made it to Cuba, after all.

Cuba just isn’t that far away…


*This will likely be my last post for a week or so as I will be on the road quite a bit for a while. I will be taking a trip to the mountains of New Mexico with my family for the better part of a week and taking part in a TBRC exercise in SE Oklahoma after that. I'll post photos of both trips once I get back.
Posted by Mike at 10:02 PM