According to a report by Waco television station KXXV there is a mystery animal roaming southwest Bell County that is “ravaging livestock.” You can read the KXXV write-up and see the video report that was aired here. 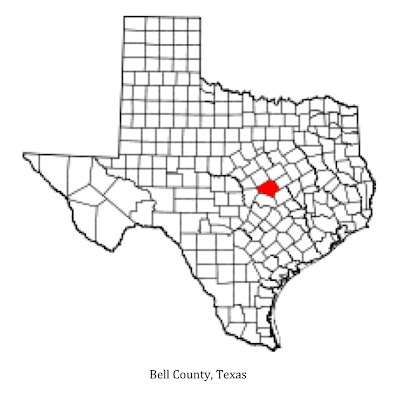 More than 40 goats have been killed and devoured along a rural stretch of Briggs Road south of Maxdale. While it is clear as to what is happening to livestock in the area there does seem to be some confusion as to just what animal, or animals, might be responsible.

“It is a coyote or a coyote cross,” said County Commissioner John Fisher.

Farmer Dale Fisher disagrees. “No, I don’t think it’s a coyote,” he said. “It’s either a wolf or a mountain lion.” 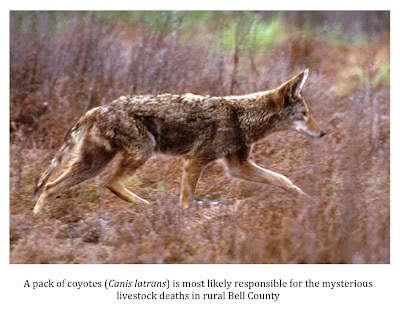 Bell County trappers have been setting traps and snares along fence-rows trying to catch the predator to no avail. Local ranchers and farmers are hoping the mystery animal will soon be trapped or shot as they are suffering financially.

“Right now goats will bring in about $1.92 per pound,” Dale Fisher said. He then echoed the sentiments of others in the area by adding, “It is a nuisance but it is a costly nuisance. We just don’t need that right now.” 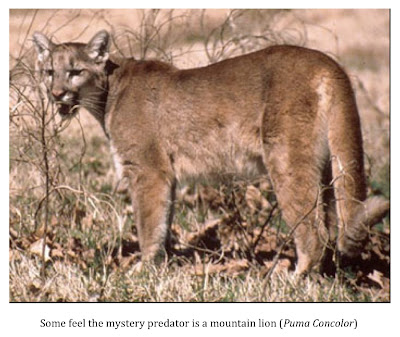 I find the story interesting but am guessing, based only on what I see in this report, that nothing more than a pack of coyotes is responsible. Having said that, others are convinced it is something larger. If there is some evidence suggesting this I haven’t heard about it or seen it. I would like to know if there have been tracks of something bigger than a coyote located on these properties or if something larger than a goat has been killed.

This is happening almost literally in my back yard. I would be happy to help in the attempt to identify this mystery predator via game camera. If anyone in the area happens to see this post and would like me to come put up some cameras please feel free to contact me via email at texascryptidhunter@yahoo.com.
Posted by Mike at 11:53 AM