I’ve started and restarted writing this post several times over the last year or so. I’m just really not sure what to write, or even if I should write, about the photo below. I have taken a pretty hard line in the past on people and/or organizations who present bad photos as proof positive that the sasquatch does exist. The bar for photographic evidence is set very high. This is how it should be. A “blobsquatch”, which is basically what the photo below is, just won’t do it. I do think that, while they don’t meet the criteria for establishing proof positive, some photos are more compelling than others. In my mind, and I admit to possibly being biased as I was the photographer, the photo below falls into this category. So, how to present this? I think the best thing to do is just to tell the story of the sequence of events that led to the photograph being taken and leave it at that. Understand that I do not know what is in the photograph and make no claims as to what it might be. Simply, since I found it compelling I thought some others might too. Here goes…

In May of 2005 I had a sighting of what I believe to be a sasquatch in the Sam Houston National Forest of SE Texas. I won’t get into the details of the actual sighting as I’ve done that before and the details are available under the “my sighting” tab and on the TBRC website here. In August of that year, just three months after my visual, I returned to the SHNF. I made several trips back to the area during the weeks and months after the sighting. These trips predate my membership in the TBRC and took place during the time when I had decided I was going to attempt to find out what it was I saw and confirm, mainly for myself, once and for all, whether this animal was real or not. Three other men accompanied me on this trip including my brother and the friend who was present that night in May when a large, hair-covered, bipedal figure was seen on a remote forest service road.

We had been in the forest a couple of days. We had not seen or heard anything unusual. The trip had been decidedly unpleasant. It was brutally hot during the day and the nights were warm, sticky, humid, and buggy. On our last afternoon my brother and I took a walk in a low-lying area not too far from a creek. The area is heavily wooded and was colored a brilliant green as all the plants and trees were fully out. Palmetto palms are plentiful and there is a thick canopy provided from the hard woods growing in this bottom area. To move about requires a lot of meandering around various obstacles like deadfalls, vines, thorns, marshy areas, etc. The bottom line is that it is difficult to get around down there. My brother and I walked to this area hoping to get into a shady spot and escape the brutal heat. We were right in that there was a lot of shade but the overhanging canopy seemed to hold the humidity in like a sauna. Even so, we decided to stop and rest for a while before heading back to camp. 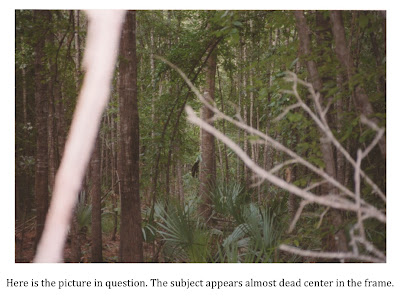 We had been down in this area for roughly 30-40 minutes when I noticed movement over my brother’s right shoulder roughly 20 yards away. I wish I could be more specific about what I saw but that is all I can really say. I had a 35mm film camera in my hand and immediately raised it and snapped a photo. I did not take time to aim or zoom. I simply raised the camera and snapped the picture. I caught a fleeting glimpse of something moving at about a 45-degree angle away from our position (picture a clock and an object moving from the center of the face to the 2:00 position). My brother turned immediately but whatever had been there was out of sight and he saw nothing. We did both hear the sound of something moving through the palmettos and leaf litter for a few seconds and then silence. We stayed still for another couple of minutes to see if we could hear more movement. When nothing happened we walked to the area where I thought I had seen something move. We sniffed around for quite a while but found nothing that indicated anything had ever been there. Shortly, thereafter, we returned to camp. As I mentioned, the camera I had at the time used film. It was not digital. That being the case, I had no idea what, if anything, I had captured. I did take the film in to be developed within a day or so of getting home but did not actually make it in to pick it up for a couple of weeks. Upon viewing the pictures, I was intrigued by the photo I took over my brother’s shoulder. Something large and dark appeared right in the middle of the photo. It is significantly darker than the surrounding vegetation. I think, and, again, I might be biased here, it is clear that whatever it is it is not a tree or stump. The contrast in how dark it is as compared to the trees and plants in the foreground and behind it is significant. Why would this tree or stump be so much darker? One friend who viewed the picture posited that it might be a burned tree stump. While controlled burns do take place in this area from time to time there was absolutely no sign of one having taken place in the recent past as of the taking of this photo. If that had been the case, other trees surely would have exhibited charring as well. I can’t imagine any sort of fire where only one tree was scorched. In addition, if the dark object had been a stump or tree it would have still been present when my brother and I examined the area. No such charred tree was there. I believe the dark object in the photo is what I saw move over my brother’s shoulder. I can’t prove it but that is my opinion. I’ve enlarged the image and zoomed in on it closely. I still don’t know what it is. At some point enlargements begin to do more harm than good. Get too close and it looks like nothing or, depending on your mindset, anything. The picture proves nothing and I make no claims as to what it shows. My brother and I made no size comparisons to try to decipher the size of the object at the time as we had no access to the image. Remember it was a 35mm film camera I used. At the time I wasn’t sure I had managed to photograph anything at all. I’ve revisited the general site many times but can’t be sure I’ve ever managed to get back to the exact same spot. The area has flooded multiple times since this incident took place and it looks different every time I visit.

So, there you have it. The story of how I attained my very own “blobsquatch” photo. I can’t say with any certainty what, if anything, this picture shows. Some will look at this and just blow it off as a blackened stump. After all, you have only my word that there was no such stump there. Others will clearly see…something else. What was there I can only speculate upon. Make of it what you will.
Posted by Mike at 11:45 AM