The Sad and Confusing Saga of the Eastern Cougar

In a bit of sad and, to some, confusing news the U.S. Fish and Wildlife Service has declared the eastern cougar (Puma concolor couguar) to be extinct. The cougar was once widely dispersed across the eastern United States. It was all but wiped out by the turn of the last century, however. Hunting, many states paid bounties for dead cougars, and a huge drop in white-tailed deer populations, conspired to kill cats in vast numbers. But were these cougars completely extirpated? Federal officials think so. They made their decision based on their conclusion that no breeding populations of these big cats are left in the eastern United States. They added that the eastern cougar subspecies has probably been extinct since the 1930s.

There are several things about this declaration that people find a bit confusing. If experts have long agreed that the species went extinct in the 1930s why are they just now declaring the eastern cougar extinct? I understand the need to be cautious when declaring an animal extinct but if, as is widely believed by wildlife biologists, the last eastern cougar was killed in 1938 it seems enough time would have passed long before now for federal officials to be as sure as they ever could be this big cat was gone. Did it really take 73 years to make such a determination? Adding to the mixed messages is that the eastern cougar was placed on the endangered species list in 1973; 35 years after the alleged last individual was killed. If this cat was extirpated in the 1930s why add it to the endangered species list in 1973? 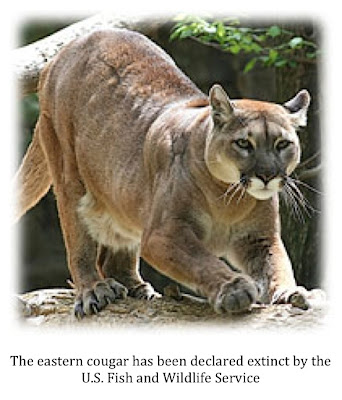 The answer is pretty obvious…people kept seeing them. They are seeing them still. Hunters and outdoors enthusiasts have long held that there is a small, but very much alive, population of cougars living in the eastern U.S. The eastern cougars, they claim, are simply extremely secretive and cautious and have eluded detection. The elusive nature of this animal has given rise to its reputation as a “ghost cat.” The U.S. Fish and Wildlife Service admits to confirming 108 sightings of mountain lions in the eastern region of the country between 1900 and 2010. That doesn’t sound like an extinct species to me. So, how does the U.S. Fish and Wildlife Service explain these sightings? The answer is a familiar one, I’m afraid.

“The Fish and Wildlife Service fully believes that some people have seen cougars,” said Mark McCollough, an endangered species biologist who led the agency’s eastern cougar study. “We went on to evaluate where these animals would be coming from.” The conclusion reached was that all the cougars seen from 1900 to 2010 were either escaped pets, were released from captivity, or migrated in from western states. Once again, the “escaped pet” theory, the pat answer that seemingly all wildlife officials go to when a, according to them, out of place cat is seen somewhere they don’t feel like it should be, has reared its ugly head. This just doesn’t seem like a viable explanation to me. Escaped or released pets might be responsible for one or two-dozen sightings but 108? Cougars kept as pets simply don’t have the skill set to survive in the wild. In my opinion, they wouldn’t last long enough to be spotted that often. In addition, the wide spread practice of keeping big cats as pets just wasn’t that common in the early 1900s. How many people could possibly have been keeping cougars as pets during the early part of the 20th century? If the U.S. Fish and Wildlife Service had mentioned a circus train derailment as a possible explanation then they would have covered the entire gambit of lame explanations for the sightings of cougars in this region.

In fairness, the researchers, along with other organizations, did make an effort to document the existence of the species in the northeast U.S. No sign of the eastern cougars were found. The sentiment is simply that if they still existed, some sign would have been located. “A breeding population of eastern cougars would almost certainly have left evidence of its existence,” McCollough said. “Cats would have been hit by cars or caught in traps, left tracks in the snow or turned up on any of the hundreds of thousands of trail cameras that dot eastern forests.” The failure of the Eastern Cougar Foundation, that spent a decade searching for signs that the “ghost cat” still roamed the region, was also cited. The organization, having found no evidence, has changed its name to the Cougar Rewilding Foundation, and shifted its focus from finding evidence that cats still exist in the region to advocating the restoration of the cougar to its pre-colonial habitat. The Foundation’s president, Christopher Spatz, said, “We would have loved nothing more than for there to be a remnant population of cougars on the east coast…we’re not seeing (evidence) because they’re not here.”

Many disagree with that assessment and firmly believe that wild breeding mountain lions still roam east of the Mississippi. Numerous sightings could be noted here to support the position that the cougars still exist. I’ll focus on the sighting of one Ray Sedorchuk instead. Sedorchuk, a freelance writer, avid hunter, and outdoorsman had a sighting of a cougar in rural Pennsylvania just last June as the cat crossed a road in front of his truck. “I could see the body, the tail, and the head, the entire animal, perfectly. It’s not a bobcat, it’s not a housecat, it’s a cougar,” he said. “It’s a sleek animal. It ran low to the ground and stealth-like. It moved with elegance.” Sedorchuk had always been skeptical of eastern cougar accounts in the past, despite two of his friends insisting that they had seen one, but no longer. “I believe they are here, without even thinking twice about it,” he said. “I believe there aren’t that many but there are enough where they can get together and breed.” 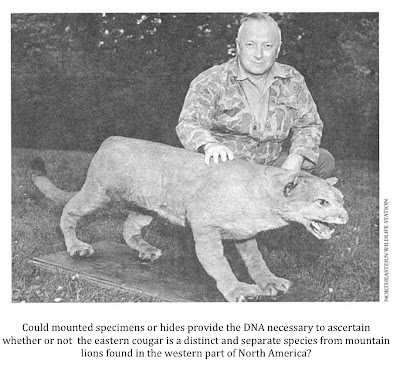 Further clouding the issue is the question as to whether or not the eastern cougar ever existed at all. There are a growing number of wildlife biologists that think there is no discernible genetic difference between the eastern cougar and the lions west of the Mississippi. If so, then the biologists who claim the cats still being see in the eastern portion of the U.S. are of the more typical North American cougar (Felis concolor couguar) are right; however, the issue of whether there are wild breeding populations in the region remains. The question of where the Florida panther (Felis concolor coryi) fits into all this really begins to muddy the waters and I will be gracefully avoiding that issue today.

The whole situation is curious to me. Why would the U.S. Fish and Wildlife Service list an animal believed to have been extinct for 35 years on the endangered species list? They must have thought there was at least the outside chance some eastern cougars had survived. If that is the case, how can they now, despite ongoing sightings of cougars in the east, be so sure that these majestic cats are gone now? Why can’t the question of whether the eastern cougar and the North American cougar are the same species be conclusively answered? We may not have a live eastern cougar specimen but mounts and hides are certainly available and candidates for DNA testing. In discussing all of this with a friend of mine I brought up these same questions. His answer was simple and may be the most likely to be correct.

Sources: Yahoo News, Science Daily
Posted by Mike at 11:55 AM