The Great Whites of the Gulf of Mexico 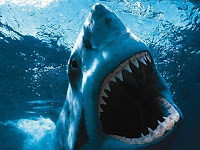 Those words bring instant recognition to most of us. The line was spoken by Police Chief Martin Brody, played by Roy Scheider, in the classic 1975 movie Jaws. The film, based on the Peter Benchley novel of the same name, was a huge hit and made everyone think twice about swimming in the ocean. I was ten years old when I saw the movie and was hooked. I read everything I could about great white sharks. My fears about entering the waters of the Gulf of Mexico eased as I learned that white sharks didn't inhabit our region. These predators preferred cooler waters and lurked in exotic places like the Great Barrier Reef of Australia, the coasts of South Africa, and the surf of northern California. No great whites prowled anywhere near the Texas coast. Right?

Wrong. The great white shark (Carcharodon carcharias) is listed as a shark species inhabiting the Gulf of Mexico. White sharks cruise mainly the eastern portions of the Gulf but do range west of the Mississippi Delta down to at least the Corpus Christi and Padre Island shores. It is thought that their presence off the Texas coast is infrequent at best but it does 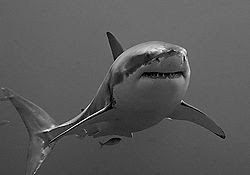 occur. In fact, white sharks are present in Texas waters often enough to warrant recognition by the Texas Parks & Wildlife. If you visit the TP&W website you will find the following statement on possession and bag limits for sharks:

Satellite technology has helped dispel many of the myths regarding these awesome fish. It was long thought that white sharks spent their entire lives patrolling the same coastal areas. Tracking studies have now shown that is not always the case. In fact, scientists have discovered that whites spend much of the year in the open ocean and dive to depths of up to 2,000 feet. Some of these wide-ranging individuals occasionally make their way to the coasts of the states bordering the Gulf of Mexico. 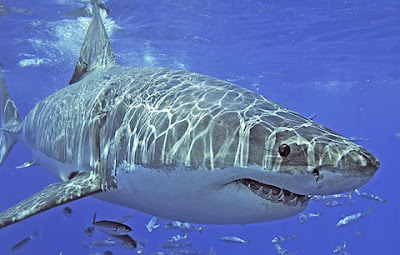 Sightings in the Gulf, though rare, are not unheard of by any means. The Tampa Bay area of Florida seems to be a spot where the great white is seen from time to time. On January 23, 1994 a 15.5-foot white shark was caught 23 miles west of Indian Rocks Beach. The monster shark was estimated to weigh 2,200 pounds. Bob Spaeth, a Madeira Beach seafood dealer, who has worked with the commercial long-line fishing industry for years, has had several encounters. He said, " They will come up and eat a big grouper in one bite." He added, "We hooked one that must have been 18 feet long about 80 miles offshore. We got it alongside the boat and it scared me." Spaeth said the shark lingered near the boat for a minute or so, decided it had had enough and swam away, breaking 900-pound test line like it was kite string.
It is generally accepted that the great white shark can reach lengths approaching 20 feet and a weight of 4,000 pounds. Much larger sharks have been reported, however. The fact is no one really knows how large these awesome fish can get. What is not up for debate is that if you see one you will know exactly what it is. Anecdotal evidence suggests your chances of doing just that, seeing one, are increasing along the Gulf coast. As Bob Spaeth said after his 1994 encounter, "I think there are a lot more of them out there than people think."

There is very little argument that bulls, tigers, makos, and hammerheads pose more of a threat to Texas swimmers than white sharks do. But there is also no arguing that when the word "shark" is spoken it is the great white most people picture in their minds. It is no longer just irrational fear to think big whites just might be patrolling the coastal areas of Texas, at least occasionally. They are there.

Just when you thought it was safe to go back into the water...
Posted by Mike at 11:29 PM