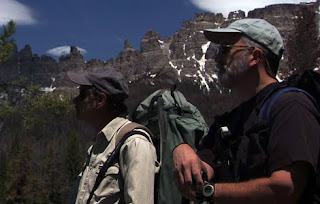 Recently, I posted a short video clip from National Geographic featuring Dr. Jeff Meldrum. The clip seemed to be a snippet from a longer program, which I was not familiar with. It turns out the clip comes from an upcoming National Geographic special entitled, simply enough, Bigfoot.

I was pleased to learn the special will also include wildlife biologist John Mionczynski. I heard Mionczynski speak last year at the TBRC sponsored Bigfoot Conference in Tyler, Texas. This guy is the real deal. He put forth a lot of fascinating ideas regarding what it would take to sustain a population of sasquatches in North America, the sort of diet the species might have, and the advantages the tremendous size of the sasquatch, as reported by witnesses, might give the species in their fight for survival. Mionczynski also had one of the most fascinating encounters with, what he feels, could only be a sasquatch that I have heard. His encounter was featured in the History Channel special Giganto: The Real King Kong.

The National Geographic special will air on Sunday January 24th at 7:00pm. You can check out some of the details about the special here. You can watch another short video taken from the special, and different from the one I originally posted, here.

I look forward to seeing how National Geographic handles the subject matter. Historically, they have not treated the subject in an open-minded manner. I hope they do a better job this time.
Posted by Mike at 10:59 AM