Monster snakes in the Everglades are just a myth, right? Not so much.

Yahoo News is reporting details regarding the largest Burmese python ever found in the Florida Everglades. The monster serpent measured 17’ 7” in length and weighed in at a whopping 164.5 lbs. The snake was found in Everglades National Park last May and has been studied intently by officials at the University of Florida ever since.

“This thing is monstrous; it’s about a foot wide,” said Kenneth Krysko of the Florida Museum of Natural History at the University of Florida. “It means these snakes are surviving a long time in the wild, there’s no stopping them, and native wildlife are in trouble.”

Adding to the bad news is that this enormous female was carrying 87 eggs. Florida officials point to this fact as concrete evidence proving how comfortable this invasive species has become in the swamps of Florida. 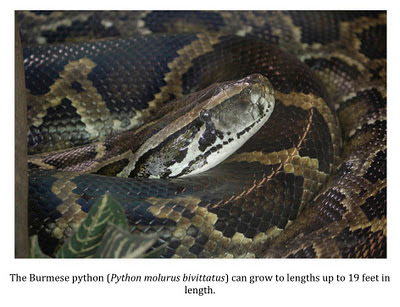 The Burmese python, as well as other exotic species, was first introduced to Florida via the exotic pet trade roughly 30 years ago. Officials believe that snake gained a foothold in the state when owners released specimens into the wild after they grew too large or too aggressive to keep in a domestic environment. These pet owners likely felt they were being humane when they chose to release these pythons into the wild rather than killing them. Little did they know the havoc this invasive species would soon wreak on the native wildlife of Florida.

Just how many pythons are there in Florida? It’s a good question and the answer is not readily known. What can be said is that, without a doubt, there are far too many and the number continues to grow.

Krysko is quoted as saying, “They were here 25 years ago but in very low numbers and it was difficult to find one…Now you can go out to the Everglades nearly any day of the week and find a Burmese python. We’ve found as many as 14 in a single day.”

Think about that last line for a moment. 14 pythons in a single day? That is scary. 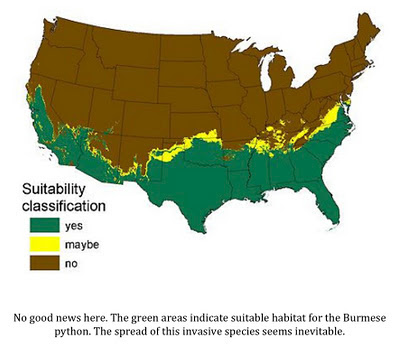 While Florida has become ground zero in the battle against invasive snakes it is by no means alone. Large constrictors are popping up all over the south and Texas is not immune. They are here and the environment in the bottoms, swamps, bayous, and marshes of the southeast portion of the state are ideal for these massive reptiles.

It is likely only a matter of time before we start experiencing problems along the lines of what Florida is seeing.
Posted by Mike at 12:12 PM