Here is a follow up to the post I made concerning the sighting of a black bear (Ursus americanus) in deep south Texas last week.

According to an article in The Brownsville Herald, the black bear that has been making the rounds in Starr County has been captured and relocated by Texas Parks & Wildlife officials.

The young male bear was captured south of Falcon Dam this past Thursday August 9th. The bear had been raiding trash cans for food and caused quite a stir in this part of south Texas as it has been more than 50 years since a bruin has been seen in the area. 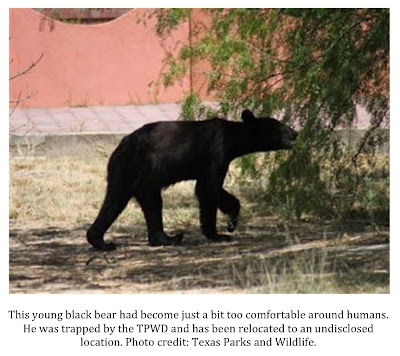 Erick Garza, a natural resource specialist with the TPWD said that capturing the bear was a last resort for the agency as this process is difficult and had the potential for causing injury to the animal. “Prior to trapping the bear we had tried several aversion techniques in order to dissuade the bear from approaching houses and trash containers," he said. "That approach did not work out because the bear had become too accustomed to getting food and water from trash and surrounding area. We were forced to trap him.”

Garza made a point to say that black bears are generally not a threat to humans and prefer to stay away from people. This particular bear, however, learned that there was easy access to food in close proximity to people. This created a scenario where a run in between the young 120 lb. male bear and a human was all but inevitable.

The article does not say where the bear was relocated but my best guess would be somewhere in the trans-Pecos areas of the state; likely in the Big Bend area.

I do have some concerns about the release of the bear. Garza said himself that the bear had learned that people mean easy access to food. While the Big Bend area, if that is where the bear was taken, is lightly populated it is not devoid of people. If this black bear has truly been habituated to people it is only a matter of time before he becomes a problem again.