Vickie and Pat Martin likely had no idea that the unfamiliar bird perched on the roof of their dock on Lake Norrell on August 9th was something special. Likely, they thought only that it was an interesting looking bird that would make a nice photo. Little did they know that they were photographing a Brown Booby (Sula leucogaster); a species never before seen in Arkansas.

Lake Norrell is located about 20-30 miles west of the state capital of Little Rock. The Martins live on a peninsula that juts into the water on the north side of the lake. The bird has taken to roosting on the roof of a dock on their property. While official recognition of the sighting is pending, there is little doubt that the bird in question is a Brown Booby. Multiple people, mostly avid birders, have seen and photographed the bird, which doesn’t seem too shy about having visitors. 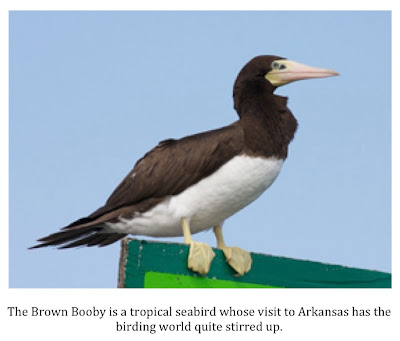 What is the big deal about a Brown Booby showing up in Arkansas? To start with, this is a seabird that is usually found in the tropical areas of Mexico and Central America. The species can be found on both the Atlantic and Pacific coasts of this region. Boobies do visit the Gulf of Mexico and Caribbean during the breeding season when large colonies are formed but have always stayed far south of the U.S. The Brown Booby eats fish and small squid and can often be seen plunging into the water at high speeds in order to dive down far enough to snag one of these morsels. They sometimes fly low to the surface of the water and “skim” for jumping baitfish. I would guess this Booby is eating mainly shad at this Arkansas impoundment.

So, what is this bird doing in Arkansas? Nobody seems able to answer that question definitively. Theories pretty much cover the gamut. The bird was blown north on a powerful jet stream/storm, the internal compass of this individual Booby is “broken,” and, of course, global warming has caused this tropical bird to expand its territory are all theories that have been voiced. Whatever the reason, a trip to Arkansas is something this bird is more than capable of undertaking. The Brown Booby is a powerful flier and, like other seabirds, has great stamina. 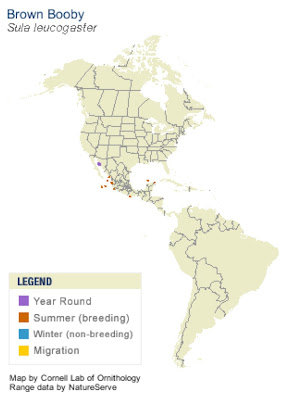 Pat and Vickie Martin have been very gracious and open with birders wishing to catch a glimpse of this rare visitor. Several groups have traveled to the site and plans for more are, I’m sure, pending. There are directions to the Martin’s property on several birding sites and forums (I’m not going to post that information here) for those interested in seeing the Brown Booby for themselves.

If you are in the area and have the opportunity to go out see this Brown Booby I would recommend you do so. You just never know when, and if, this opportunity will present itself again.