The Latest on the Bell County Cougar Attack

I received a couple of emails from the Fisher family who owned one of the two mares that had to be euthanized after being attacked by what is believed to be a cougar in a rural area of north Temple in Bell County, Texas. Mrs. Fisher also included photos of the wounds suffered by the horses. Be warned some of the photos are graphic.

Below is Mrs. Fisher’s description of what she found the morning they went looking for their missing horses:

It was the most horrifying thing I ever encountered in my life. These poor mares struggling to remain standing, their skin, muscle and tendons on their front legs tore to the bone. Cola, our 6 yr. old mare, had punctures in her neck and air accumulating throughout her body. Blood drained from their body. Claw marks on their chests, their bellies on their hindquarters.

when my husband and I walked up the hill to where we could see a few of the horses, we first saw Cola standing in the distance. Our gelding, Flash, standing near her trying to comfort her, blood splatter on his hindquarters. We saw muscle and tissue and then her leg bones exposed, blood so thick on her legs it was horrifying. She couldn't walk but she continued to fight to stand.

We then saw Kiki in the distance and noticed she also had the same leg injuries. Our other gelding, Freckles, by her side. Her baby pacing, not knowing what was wrong with her mama. Freckles also had blood splatter on his left hind leg and left front leg. La'Kota, the baby, also had blood splatter on her. She had claw marks on her chest, belly and hind legs; signs showing a terrible and lengthy fight. She also continued to struggle to stand.

A third mare, Billy, was injured. She was limping on both her front legs. It was originally thought that she may injured herself running away, but further investigation into her wounds several days later, after her bandages were removed, showed deep claw lacerations below her fetlock on both front legs. Her baby, Hay Boy, also had lacerations on his chest.

What confuses us...are these several questions....can one cougar continue to fight and attack and mortally wound 2 one thousand pound horses and wound a third?

These horses were approximately 200 to 400 feet apart from each other. The attacks were in these two areas. Why attack and disable one horse and go after the other? 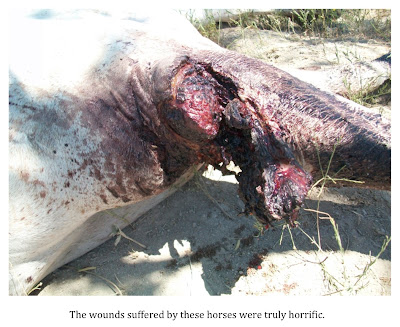 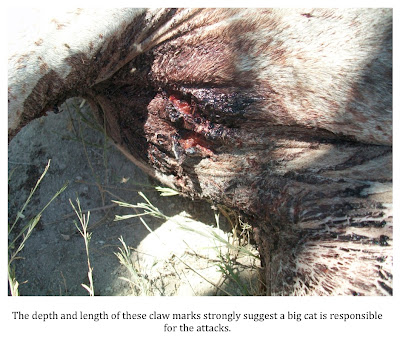 There are only a handful of animals capable of inflicting this sort of damage on full-grown horses. Initially, I considered coyotes (Canis latrans) and/or a pack of wild dogs. Most of the wounds suffered by the horses are on the lower part of their body and legs; certainly, areas within reach of coyotes or dogs. The long claw marks on the backs and higher up on the animal caused me to rethink this and once I saw the deep claw wounds in the photo above I realized there is no way a canid of any kind was involved in this particular attack.

One of the animals native to Texas that has the power to inflict this kind of damage to an animal the size of a horse is a black bear (Ursus americanus). This would be highly unusual on several fronts. Bears are making a strong comeback in east Texas and have always maintained good numbers in far west and south Texas but it would truly be something if one were present here in central Texas. They have been creeping in from the west, however, and one was killed in Menard County not too long ago. Menard is only 175 miles away. That being said, a bear is highly unlikely. This just isn't their style.

This attack screams “big cat” to me. This sheer depth of the claw marks visible in the picture above is really impressive. This would have had to have been a very big cat. That being the case, a jaguar (Panthera onca) is a possibility. Jags were once native to Texas and have been creeping back northward from Mexico in recent years. They have been documented several times in Arizona via camera traps over the last few years. There are anecdotal reports of jags being spotted in Texas as well. While most of the sightings and incidents have been far south of us I’ve heard of one notable exception. In the interest of full disclosure, this incident was related to me second hand after-the-fact; however, the person who shared it with me is a man of impeccable character and I have absolutely no doubt he told me the truth. He told me a rancher in the Panhandle reported losing large livestock on a regular basis to TPWD several years ago. After losing his second alpaca the game warden came out. They found the hind-quarters of the alpaca 20 feet up in a tree. The game warden told the rancher that this was not a cougar and that he likely had a jaguar on the property. The cat was never seen and eventually must have moved on as the killings stopped. There is speculation that the large "black panthers" often reported through out the state are actually melanistic jaguars. Still, a jaguar is the longest of long shots here. 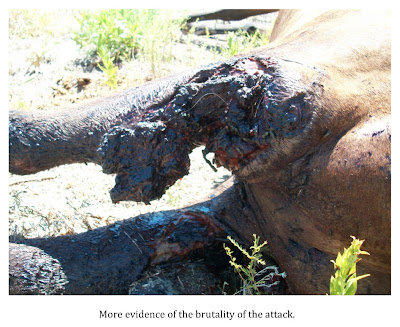 Having said all that, a cougar (Puma concolor) is, by far, the most likely culprit. These big cats, while not common in the area, have been seen here before. I just wanted to cover all the bases by mentioning other possibilities. One thing I've learned over the years is that you never know what you might come across when you get into something like this. Personally, I do believe a cougar to be the predator in this particular case. 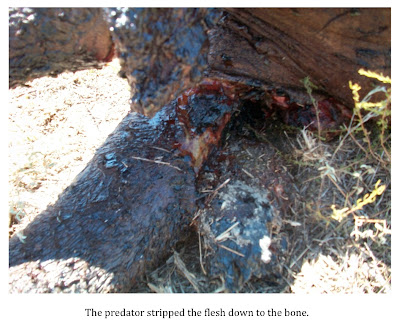 I am no expert; however, so I sought a second opinion from a friend of mine. Tod Pinkerton has a degree in Wildlife Biology from Texas A&M and worked for many years as a coyote and nuisance animal trapper in SE Texas. I sent him the photos and asked for his input. His reply mirrored my own thoughts and read as follows:

“While I'm certainly no expert on cougar attacks, I can think of no other native Texas animal that could have pulled this off. If what I'm seeing in some of the photos are claw marks and not folds of skin, etc. then the work has to be that of cat.

Coyotes, dogs, and wolves don't use claws in any appreciable manner to disable prey that I'm aware of. This should rule them out (again if those images represent claw marks, and not some other factor like thorns, wire, etc.).

There isn't a coyote or bobcat within this state tough enough to even think about taking on a full grown horse. Nor one that could inflict that level of damage on a living full grown animal. Small colts/foals are another matter, but this occurred to multiple full grown ones as well.

IMHO it is likely the work of a cougar. The only other known Texas critter even physically able to try to do this would be a black bear, but I've never heard of one trying to take down a horse.

I'll try to look up some information on this tonight. In the meantime you might advise them to contact their local wildlife/animal damage control specialist (trapper) if they haven't already. They can usually get in touch with one through the local county agriculture extension office. These folks are professionals and have probably investigated this sort of thing before.” 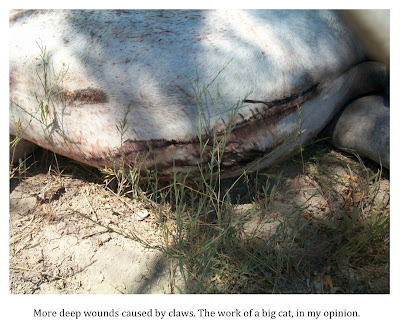 Why did the predator not finish the kills? That is hard to say but it was stated by Mrs. Fisher that it was clear these horses fought hard for their lives. It is very possible that the predator decided this particular meal was not worth the trouble or was kicked and injured itself. If so, it might have had to retreat. Wildlife biologist Tod Pinkerton added:

“It's likely the cat bit off more than it could chew. It may have gotten mixed up in all the confusion as to which animal it was attacking. Perhaps the horses came to each others aide? We'll likely never know the answer here.

I do know they (cougars) are quite capable of killing/wounding multiple animals in a single encounter. I've heard stories of them taking out 15-25 sheep or goats at a time. It might be that they get 'intoxicated' with the killing of prey?”

The drought we are suffering is making life very difficult on wildlife and forcing them closer to populated areas in order to find food and water. This, in my mind, is the scenario that led to the attacks on these horses. Our wildlife is starting to get a bit desperate and that desperation is beginning to manifest itself in some atypical behaviors.

It is quite possible, if we don’t get rain soon, that we will see more of this sort of thing in central Texas.
Posted by Mike at 2:34 PM