Here are the latest sighting reports I’ve received from readers regarding black panthers they claim to have spotted all across the Lone Star State. Most of the reports have been submitted anonymously so I can’t vouch for their veracity. Having said that, there is nothing in these particular accounts that strikes me as being a red flag. I present them as I received them.

"I saw a large black cat in Dekalb, Tx (which is 2 1/2 hours north east of Dallas) during July 2010. There is a lot of open land and a river is close to here. I was driving and it crossed the road in front of me. I had to slow down to avoid a collision, as well as to get a good look at the creature. My wife was with me. I have done some extensive research on the topic of these cats being in this region of Texas. I would have to say that it was probably a black cougar. A lot of people refer to them as panthers in this area as well. But it was definitely not a bobcat. It was indeed a slick, smooth black coat, with a big square head. The muscular tone of the beast was spectacular. One of the biggest I have seen in the wild or captivity." 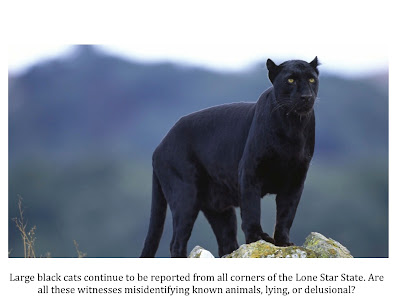 This one comes from McDade, Texas:

"Several sightings of a large dark cat. Supposedly we have a pair with 2 cubs, estimated to be last year’s offspring on the neighboring land. She could possibly have new cubs also. I live in a populated campground and I have seen it 2 times this summer and heard it scream this past week. Many pet cats have gone missing and it was seen taking a cat from a porch. Large footprints have been found as we have sandy soil. We have game cams set up trying to get a good picture."

The next report comes from Mesquite, Texas:

"Wow. I am so happy that others have seen what my daughter and I saw in October 2008. We live in Mesquite Texas right next to Sunnyvale.It was early evening around 4:30 pm. The road we were on had many potholes so we were traveling very slow, under walking speed. We were located right next to the Dallas water treatment plant when all of sudden this large black cat came out of a big drainage pipe, turned left, and came up to the road crossing right in front of my car 12 feet from us. I stopped the car and we both sat there in awe. The cat was over 5 feet long, stood 3 feet high, had a tail over 3 feet long, and was black with some grey mud dirt from the pipe. It turned towards us and I rolled up the windows. The funny part in this is when we first spotted this cat my daughter remarked, “Daddy, that’s not a bobcat,” which we had seen before in the area. Well it walked up to us and it opened its mouth and we saw its wonderful set of teeth. Large canines and a pink tongue. The cat walked closer to us and I called 911 and told them what we both were looking at and of course they did not believe us. The 911 operator told us we were looking at a large raccoon, to which I replied “With a 3 foot long tail and standing 3 feet high? Are you kidding?” She told me she would call back. The cat then stopped and I moved the car forward and we came within 4feet of it and it turned and walked halfway off the road then jumped from the middle to the far side and into the tall grass. 911 called back and told me that the local police knew of the cat." 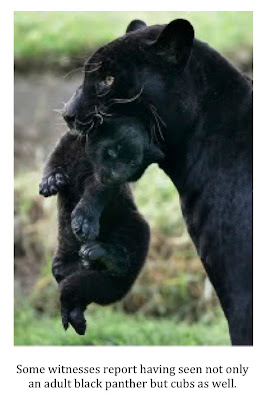 From the Texas Cryptid Hunter Facebook page in response to the recent horse kills in Bell County:

"I'm a former student at UMHB, the university in Belton just down the road from Temple. I can truthfully state that I have seen at least on big cat up in that area late at night while driving back roads. I now live about 4 hours south of Belton and have seen big cats near the area I'm living now. Have spotted a particular black cat about 50 yards from the back porch of my house and watched him hurdle my 5 wire fence that surrounds my pasture. Just from the cats I've seen in person, I can say that I think that these horses were attacked by a big cat and nothing else."

Again, I do not know any of these people and can’t possibly know if they are all telling me the truth but find it interesting that reports of large black panthers, which are not supposed to exist, continue to roll in from all parts of the state.

What are these people seeing?